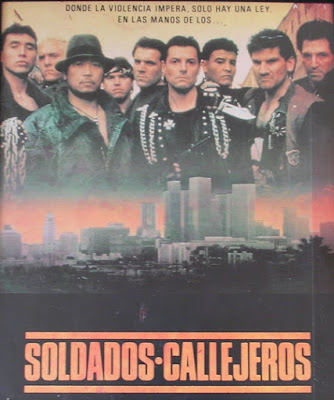 
The JP’s and the Tigers are two rival gangs in town. The Tigers wear less-than-intimidating tiger decals on their varsity jackets. That’s how you know they’re a gang. When the sadistic and insane leader of the JP’s, Priest (Rector) gets out of prison, he makes it his mission to destroy the Tigers. While the Tigers just want to have wholesome fun like dancing at the prom and skateboarding through the halls of their school, the JP’s are hellbent on rape and murder. Just how these two mismatched groups became rivals is unknown. Yes, there is a love triangle at play between Priest, Julie (Armstrong), and Tigers leader Troy (Homb), but that still doesn’t really explain it. (Here’s a tip we should all follow: stop looking for logic with Street Soldiers).

Anyway, a likable Karate (shouldn’t it be Tae Kwon Do?) instructor named Master Han agrees to train the Tigers so they can be victorious against the JP’s. You know he’s a Karate instructor because there is a one-word sign above his formerly-abandoned building that reads: KARATE. Unfortunately for the Tigers, the JP’s have their own “evil Karate instructor”, Tok (Hwang), so THEY are all in training as well. Could the ultimate rumble be at hand? And what does the mysterious Wheelchair Willie (Richardson) have to do with any of this? And what the HECK is going on here?

Street Soldiers is a great example of 90’s Silly. If you go into this expecting a gravely serious treatise on the horrors of gang life, you will be sorely disappointed. However, if you keep your mind open to the fact that a bunch of dudes who look like middle-aged men can caper around while attempting to appear as though they’re still in high school while they get into knife fights whilst wearing funny-looking jackets, then you will be truly ready for Street Soldiers.

Yes, of course, the budget is low, and there is plenty of non-acting/overacting (witness Jeff Rector attempt to out-John Miller John Miller) and the whole thing is a wonton soup of wanton ridiculousness, but it’s not boring. It’s also not quite as unselfconscious as Miami Connection (1987), but it’s heading into that ballpark. Actually, you should probably see it.


The second the viewer sees a bunch of men playing stickball in the streets (with each other; they should probably be playing with their kids) and then get into a “rumble” which should really be a dance-off, followed by a mustachioed Karate instructor taking every last one of them under his wing, he or she realizes they probably shouldn’t be too tough on Street Soldiers.

The most hilarious thing about the movie is the fact that these aforementioned adults were cast as high school kids. Does this exist in the same universe as Beverly Hills, 90210? Because we haven’t seen high-schoolers this elderly since Dylan and Brandon. The cafeteria in Street Soldiers is the only one on record serving not just sloppy joes but Centrum Silver. The gang hideouts for both the JP’s and the Tigers look like sets for a Viagra commercial. They’re getting into gang rumbles when they should be concerned about paying their mortgages.

Anyway, there are some nice editing touches like cool scene transitions, a mid-movie freeze frame (it should have ended the film, but we’ll take it just the same), and a soundtrack with some pretty decent songs on it. There was actually a cassette release of the soundtrack, which features bands such as Lonesome Romeos, The Snakes, Mr. Cosmos, and Benny Mardones – not exactly hip with the kids as they were probably going for, but the adult contemporary set (i.e. the cast) is the perfect audience for it.

The whole “this is really out of touch” vibe is really quite charming. Of course, it all ends with the time-honored Final Warehouse Fight. Throughout the movie thus far, a bunch of seemingly-random things have occurred, such as blues music blaring on the soundtrack out of nowhere, for apparently no reason. Regardless of that, it’s still better than Chains (1989) or Dead End City (1988). Everyone involved gets an A for effort, despite how dippy and, well, naïve it all is.

Released by Academy on VHS in 1991, to find out the true meaning of “Middle-Aged Punks”, look no further than Street Soldiers!

Good movie. The fight scenes were great and I liked the showdown in the end. But the one part when priest was chopping off the limbs of the dummy and his gang cheered him on made me laugh. And the dam cobra! Really enjoyed this movie. Thanks for reviewing this.

Thanks, happy you enjoyed the write-up! Haha agreed, the dummy scene was great.