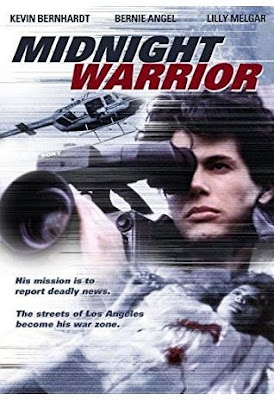 Nick Branca (Bernhardt) is a freelance TV news cameraman who cruises the streets of L.A. at night looking for news events to sell to the networks. Along with his buddy/co-worker/old salt Sam (Brinton), the two, well…nightcrawl as they search for – and flirt with – disaster. However, Nick is going through some changes. He’s putting aside his womanizing ways and ventures to settle down with “neighborhood girl” Angelina Mantucci (Melgar). He also saves someone from a burning car and becomes the hottest news of the day himself.

While Nick wants to downplay the event, unscrupulous and downright evil news producer (aren’t they all?) Buddy Arnstein (Angel) wants to exploit the event for, you guessed it, higher ratings. All of this comes to a head in a shocking act of violence that only Nick Branca has the guts to report on…permanently. Or something like that. Will we all discover the true meaning of fake news? Or will Branca be the ultimate MIDNIGHT WARRIOR? (And what about Sam?)

As we’re always saying, the low-budget independent productions are always ahead of the curve. Because they can’t hide behind bloated budgets and superhero franchises, they actually have to have ideas. These filmmakers are forced to react quickly to the events of the day, as well as think ahead to the events of tomorrow. Case in point, one Midnight Warrior. It predates not just the above-referenced Nightcrawler (2014), but also another video store classic with a similar theme, the much sillier Parole Violators (1994). 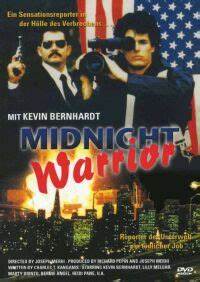 Director Merhi and the whole PM crew apply their signature style to this tale of romance, violence, and media jackals. It’s essentially a drama, but because it’s PM there’s bound to be a blow-up or two. There’s even a “love theme from Midnight Warrior” on the soundtrack. At least that’s what we called it. The main title theme song by Jastereo Coviare and Azelie Corliss is incredibly catchy, and is used well on the soundtrack. You’ll be at work or somewhere else and just randomly start singing “war-ey-or!” because it’s still stuck in your head. Sade should have covered the song.

Other highlights include shady backroom deals, a scene outside a video store called Video Force (presumably they had a big action section), and Kevin Bernhardt’s hair. We last checked in on Bernhardt with Kick or Die (1987), which was quite a while ago. He makes a decent 80’s coolguy. He’s not to be confused with Daniel Bernhardt, however. PM-only actor Bernie Angel wonderfully chews the scenery as the heartless (and ironically-named) Buddy, while Brinton as Sam almost steals the show.

In the end, Midnight Warrior is a decent example of what PM does, and is a good exemplar of how the low-budget independents can be quite ahead of their time. While it leans more on drama and isn’t really a slam-bang action movie, Midnight Warrior – despite some minor pitfalls – is worth checking out.