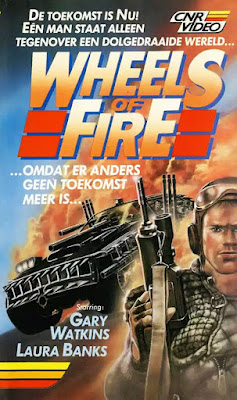 
In, you guessed it, a post-apocalyptic future, a man named Max…er, sorry, I mean Trace (Watkins) drives around in a souped-up car that drives fast. His sister Arlie (Wiesmeier, not to be confused with noted Army man-turned-actor R. Lee Ermey) is in a relationship with Scott Baio lookalike Bo (Parvin), and there’s not much to do for entertainment except watch tournament fights to the death and drive around aimlessly.

All that changes when Arlie is kidnapped by baddies Scourge (Avellana) and Scag (Daniels). Now with a renewed sense of purpose and a mission to carry out, Trace travels the badlands meeting and/or fighting both human and Morlock alike in his quest to rescue Arlie. Along the way he picks up some allies in the form of warrior woman Stinger (Banks) and more subdued woman Spike (Grovenor) but truly Trace’s best weapons are his flamethrower and his stellar jumping abilities. Best notify your next of kin, as this WHEELS OF FIRE shall contain things that explode! 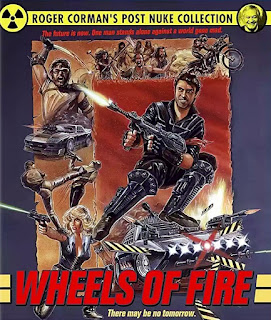 The fact that Mad Max came out in 1979 was fortuitous for low-budget movie producers. The burgeoning home video market was just about to really take over and become ubiquitous. That gave filmmakers a few years to produce countless knockoffs, rip-offs, clones, and carbon copies. Of course, they range in quality. Some are good, others are mediocre, and some are just bad, like any other kind of movie. Thankfully, Wheels of Fire (AKA Desert Warrior, AKA Vindicator, not to be confused with the Canadian Vindicator that came out the following year) is one of the better ones. It’s still very hard to top the Italian ones, but our old buddy Cirio comes darn close.

Wheels of Fire is well-shot, with really good use made of the Philippine locations. Of course, it delivers everything else you expect of post-ap’s, including shooting, blow-ups, car chases, fights, rampant nudity, amusing dialogue, and cars with crazy crap glued to them. The fact that Trace’s main weapon is a flamethrower is also pretty cool and different. Sure, it’s all fairly brainless, but what did you expect? At least it’s from the 80’s and it’s all pretty redolent of that golden, magical time. 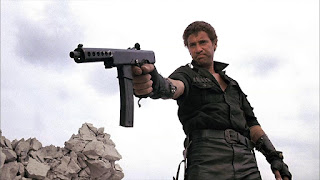 This also completes our Jack S. Daniels collection. Upon the viewing of this movie, we’ve officially seen and reviewed all five of the films he’s appeared in. He’s a charismatic guy who is fun to watch on screen. He’s one of our favorite character actors, and he should have been in more stuff, but we’re happy with what he did do.

As for our main star, Gary Watkins, he should have done more as well; he had a lot of potential as an action star but the market was pretty flooded at that time. Even though the filmmakers – from his clothing to his hair – tried to make him look like Mel Gibson, he still managed to put his own stamp on things.

While Cirio went back to the post-apocalyptic well with Dune Warriors (1990), Raiders of the Sun (1992) – which starred Richard Norton but contains footage from Wheels of Fire (including Jack S. Daniels and Henry Strzalkowski footage, among other Philippines-set movie regulars that was ported over into the new, interpolated material) – and a supposed abomination called Water Wars (2014), Cirio’s last credited work which Jim Wynorski took over and contains footage from all three of the above-mentioned post-ap’s, best to stick with Cirio’s first and best of the three, Wheels of Fire.

While there isn’t a ton of substance on show here, on balance Wheels of Fire is not bad and is pretty entertaining. It retains that “VHS vibe” and manages to be a better and more worthwhile watch than a lot of its post-apocalyptic competitors.

It’s one of Cirio’s best! You forget about two of Cirio’s post-ap movies: Stryker and Equalizer 2000, but anyway, Wheels Of Fire is the best one and the most OTT.

Can't agree more, oh yeah, forgot about those! Wheels Of Fire was a blast, usually they are a slog.