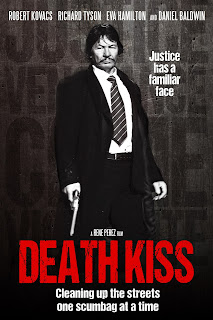 
A mysterious man known only as K (Bronzi) is cleaning up the streets. While he remains a stranger to everyone he comes into contact with, he looks oddly familiar. Maybe it's the face. Maybe it's the hair or the mustache. But something about him rings a bell. After he blows away the criminal scum that are polluting our streets, he gives money in an envelope to a woman named Ana (Hamilton), so she can help raise her wheelchair-bound daughter. While K tries to give them the money in anonymity, Ana tries to forge a relationship with K. But he's not exactly the chatty type.

Meanwhile, an evil baddie named Tyrell (Tyson) and his goons are on the loose. K faces one of his biggest challenges to date as he goes after them. Throughout all of this, a talk radio host, appropriately named Dan Forthright (Baldwin) electrifies the airwaves as he lays down truism after truism (we would definitely listen to the Dan Forthright show if it was in radio or podcast form). Remember, it's not a Death Wish, it's a DEATH KISS...which is, you know, pretty close.

By now, you may have heard of a man named Robert Kovacs (AKA Robert Bronzi) - a man who looks exactly like Charles Bronson. It must be hard for Bronzi to walk down the street, because if there's anyone out there who didn't know that Bronson passed away, you'd really think it was him. If he wasn't doing movies like Death Kiss, he could make a lot of money on the lookalike circuit. Maybe he could do parties with women who look like Marilyn Monroe and such. Just watching Bronzi walk in the movie is incredibly entertaining. Never mind when he starts shooting the baddies. Now, we always say that low-budget filmmakers get actors that resemble other actors (case in point when Counter Measures needed a Christopher Titus lookalike), but this is ridiculous! Ridiculously fun, that is. 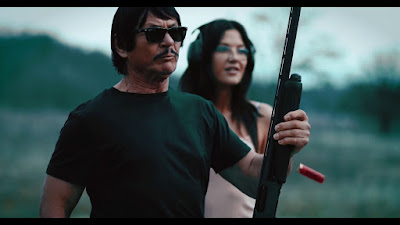 We applaud everyone involved with Death Kiss for making such a labor of love. Their love for the original Bronson (something we have to say now) and the Death Wish series in particular is evident, and infectious. Stylistically, Death Kiss is comparable to recent "throwback" DTV offerings like the similarly-themed Skin Traffik (2015), or Instant Death (2017). Those were also low-budget tributes to the 70's revenge genre. The bullet hits in Death Kiss are certainly over the top and ridiculous, with cascades of Kool-Aid exploding at every turn, which gives the film a certain comic-booky feel. Hopefully that's what they were going for. It's certainly quite unlike the original Death Wish film in that respect.

It was nice to see Baldwin and Tyson reunited for the first time since the underrated The Pandora Project (1998), although they don't share any scenes together. Tyson's look in the movie is quite different from most of his past work that we've seen, with his long dark hair and dark beard. He must have been proud of the project, as he's listed as an associate producer. This is also one of Baldwin's best roles in years; his very well-delivered monologues are very enjoyable and are the glue that holds Death Kiss together.

One of the biggest assets that Death Kiss has on its side is the wholly cool and highly appropriate synth score by The Darkest Machines (AKA director/writer/cinematographer/editor Perez). This is exactly the sort of score a movie like this should have. We were really happy they went in this direction for the score - an old-school style revenge movie with a man who looks uncannily like Charles Bronson topped off with a synth score is what the world needs now, and thankfully Perez and his cohorts gave it to us.

What's not to love about Death Kiss? We absolutely are looking forward to anything Bronzi does in the future. He very well could be one of the brightest stars of modern-day DTV.