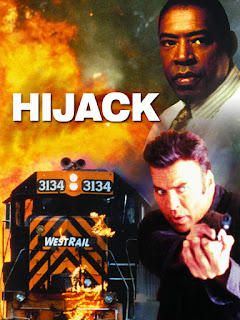 Eddie Lyman (Fahey) is an ATF agent with a burning desire to take down a domestic terrorist organization called the Firebird Action Network, or FAN. He has so much dedication to his job, in fact, that he goes rogue and gets suspended from the force. When his wife (?) Valerie (Toussaint), a PR flack for Senator Douglas Wilson (Hudson the Elder) is called away to accompany him on a train trip through the outskirts of L.A., trouble follows. FAN baddies David Anderson (Huff) and Carl Howard (Kilpatrick) HIJACK the train and arm it with a nuclear bomb and direct it towards a high-population area so it can blow up and do maximum damage.

Thankfully, Lyman is also on board the train. Back at HQ, fellow ATF agents John Gathers (Miano) and Frank Jennings (Hudson the Younger) are holding down the fort. Will Lyman keep things on track? Or will the FAN fan the flames of terror? Will you be interested in finding out?

Another day, another train slog. As if Under Siege 2: Dark Territory (1995), Derailed (2002), and Death Train (2003) weren’t enough, along comes Hijack. To be fair, Hijack is better than those latter two entries in the Train Slog canon, but it’s very similar. It will feel familiar to anyone who watches DTV action movies, theatrical action movies, train movies, TV movies, or pretty much anything. It’s a train-slog-by-numbers that doesn’t offer much new to a well-worn subgenre of Die Hard-esque escapades.

The cast is very good, however, and fan favorites like Fahey, Hudson, Miano, Huff, and Kilpatrick do their best to sustain interest, but it’s hard when there’s nothing to work with. It’s a testament to these professionals that they did what they did with the material. 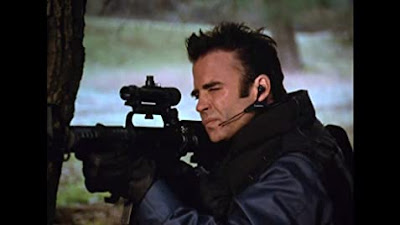 Fahey is always a quality hero (or villain for that matter) and as Lyman, the jigsaw puzzle-loving ATF agent, he doesn’t snap into action nearly quickly enough. He should have been busting heads sooner than he does. Ernie Hudson is typically terrific as the senator (he wouldn’t get to be President until Stealth Fighter), and here we also get two Hudsons for the price of one, as Ernie Hudson, Jr. is also on board. Huff and Kilpatrick, as the baddies, spout a lot of amusing political dialogue which marginally helps to sustain the viewers’ interest. Toussaint looks a lot like fitness star Jillian Michaels.

Michaels should have been the heroine in at least one action movie. Maybe that will happen someday.


In the end, Hijack is not exactly essential viewing…unless you really, really, really like train-set action movies. That’s action movies set on a train. Not a train set like the toys. You know what I mean. Anyway, if you want to see something like Hijack but done much better, check out Militia (2000).