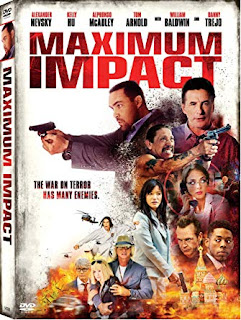 When Secretary of State Robert Jacobs (Roberts) travels to Russia on an important mission, his teenage daughter Brittany (Butorina) tags along. The main reason she does this is so she can run off with a boy band pop star she’s been texting with. This seems like the ideal time for a baddie named Tony Lin (Dacascos) and his sidekick Ian (Hues) to kidnap her.

After a lot of bumbling around, they finally manage to do this, and so an American CIA (?) agent named Kate (Hu) has to team up with a Russian FSB strongman named Maxim Kadurin (Nevsky) to save the girl, and, if time allows, her date. As if that wasn’t enough, a criminal mastermind of some sort named Sanchez (Trejo) and his goons are causing trouble all over Russia. How do Barnes (Arnold), Scanlon (Ling), and, perhaps most enigmatically, “Man In Shadows” (Baldwin) all fit into this picture?

Much like director Bartkowiak’s prior Exit Wounds (2001), Maximum Impact is a mix of action and comedy that features Tom Arnold. The emphasis this time around seems firmly on the side of comedy, even though there are some silly and not entirely serious fight scenes and some car chases, both of which appear to be green screen-enhanced. Stick with Exit Wounds. Or, also featuring Dacascos, Drive (1997).


The jokey tone and childish dialogue start to get tiresome after a while, and expecting the viewer to tolerate this over the course of an inexcusable 109-minute running time is just asking too much. On the plus side, it has a lot of energy and a fast pace, but it just goes on and on too long.

Yes, there are fruit cart chases and a lovely framed Eric Roberts picture on the wall, but on the other end of the spectrum there are green screen missiles and helicopters, teenagers texting, and dialogue that mentions Instagram and Snapchat. Have we really fallen that far from Charles Bronson blowing away the bad guys with a rocket launcher? If this is truly the state of action in 2017, we’ll stick with the old classics, please.


There are too many people in the cast to really break down fully, but let’s just say this is a classic case of Lone Tiger Effect. Hell, it even has Matthias Hues, as if to underline the point that much more. Did all these people know they were signing on for a goofy comedy? It has all the Bartkowiak trademarks, such as putting hip hop beats under the dialogue scenes, and a wacky coda during the credits.

William Baldwin just makes wacky faces into a screen. There’s a place called Grump International Plaza. Tom Arnold’s running gag is about his bladder. We could go on, but we won’t. That being said, Alexander Nevsky somehow manages to come out of all this relatively unscathed. Maybe that’s because he’s credited as a producer on the film.

Comedies and action movies shouldn’t be more than 90 minutes. Don’t filmmakers know this by now? Maximum Impact wears out its welcome quickly and leaves minimal impact on the viewers.

Comeuppance Review by: Brett and Ty
Posted by Ty at 4.8.20