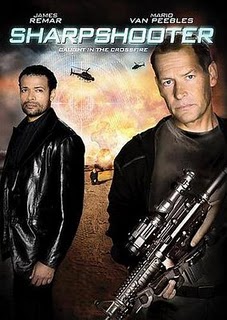 
Dillon (Remar) is a professional assassin. After a lifetime of traveling around the world killing people for the CIA, he finally wants to hang up his sniper rifle and retire. But, wouldn't you just know it, he's convinced to do the classic and time-honored "One Last Job". Flick (Van Peebles), his boss, convinces him to travel to Julian, California, a rural fishing village. It's there he's supposed to pose as a Los Angeles lawyer just out to get some "R n' R". However, his true mission is to assassinate an evil baddie named Richard Phillips (Sapienza).

Of course, Phillips has a large mansion and a respectable amount of goons at his disposal. As Dillon is figuring out his mission, he meets a magazine writer named Amy (Stewart), as well as Sheriff Graham (Boxleitner), the law in that small town. However, as you might expect, after some double-crosses, back-stabs, and general intrigue, the hunter becomes the hunted and now Dillon has to use his lifetime of survival and killing skills to defend himself against the organization that trained him and that he's worked for for years: the U.S. government. Can he do it? Will he live to be the ultimate SHARPSHOOTER?


Sharpshooter is a made-for-cable outing that should have been much better than it is, based on the people involved. Not only does it feature fan favorites Remar - last seen around these parts with Quiet Cool (1986) - and Mario Van Peebles, it also has Boxleitner and two other people with 80's cult pedigrees - Catherine Mary Stewart from The Apple (1980) and Night of the Comet (1984), and it was directed by Armand Mastroianni of He Knows You're Alone (1980) fame. There's even a small part from Lee Reherman as Ziggy (of course his name is Ziggy) - the guy from Champions (1997) who looks like David Letterman and has a similar name. 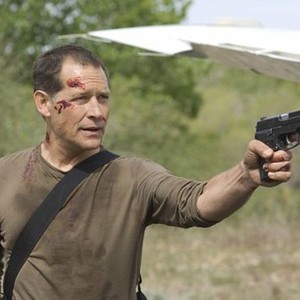 So you'd think, with all that talent involved, the end product would be something other than the standard fare that we get. It has many, many cliches that we're all used to seeing by now: One Last Mission, the baddie mansion, Prerequisite Torture, the double-crosses, etc. Remar is good as always and his narration adds something, but it's not enough. It slows down a lot around the mid-point and never really recovers. There's also some very silly green screen during a chase sequence that did not need to be there. It didn't help matters.


It's not that the movie overall is bad, but it's nothing you haven't seen before, and done better elsewhere. There's not a lot of reason to go out of your way to seek out Sharpshooter. It seems like the brief given to Mastroianni was to make a telefilm version of Sniper (1993) mixed with Shooter (2007), and give it a similar title. As we said before, Remar, Stewart, Van Peebles, and Boxleitner are all fine in the film and none of this is their fault, but there's not a lot for the audience to hang on to. We were never given the red meat that we want. It's just a movie on a screen.


As much as we'd like to, we can't really recommend Sharpshooter. It delivers absolutely nothing new to the One Last Mission genre, which really is a genre unto itself at this point. Unless you're a completist as far as any of the talent involved goes, we can safely say you're not missing out on much if you never see it.

They should rename it “Dullshooter”.
Comeuppance Review by: Brett and Ty
Also check out a write-up from our buddy, The Video Vacuum!