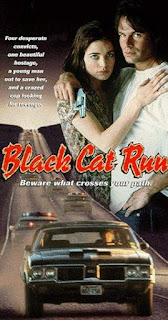 Johnny Del Grissom (Muldoon) is a humble gas station attendant and tow truck driver in a small Texas town. He loves racing his car in his spare time - which will come in handy later - and he loves his girlfriend Sara Jane (Heinle). Johnny's rival on the racing circuit, and for Sara Jane, is Deputy Norm Babbitt (Busey). When an evil gang of criminals breaks out of a chain gang and goes on the run, trouble ensues. When the leader of the baddies, D.J. Wheeler (Greene) kidnaps Sara Jane, Johnny takes off after them. But Norm thinks Johnny went crazy and killed some people in the process, so now the police are after Johnny for the wrong reasons.
As Johnny chases the bad guys, and the cops chase Johnny, a trail of death and destruction follows in their wake. Eventually it leads to a final confrontation in New Mexico. What will be the final outcome of the BLACK CAT RUN?

Because Frank Darabont was involved with the writing and production of Black Cat Run, the quality overall is a couple of notches higher than your typical made-for-cable low-budget chase/action film. It put us in mind of Men of War (1994), the Dolph film that was written by John Sayles. But really, speaking of Dolph, plotwise it's more akin to Army of One (1993). But instead of Dolph on the move, it's Patrick Muldoon. Seems like a natural replacement.

It's certainly arguable, but we think this is the best Muldoon we've seen to date. He plays the "lovable lower-class guy" well and he really gets in on the action. Going back to the Darabont influence, the structure of the film, while quite simple, makes a lot of sense and is executed well.
For example, after the opening scene where the convicts escape and you know they're armed and dangerous, the movie completely shifts to the rather innocent world of Johnny Del Grissom, Sara Jane, and Norm, and we actually spend time getting to know them and like them. That way, when the threat eventually comes around, we care about their plight. You'd think more movies would do this and it would be obvious, but so many miss what's right in front of them: that you have to have likable characters that you come to know, or the audience is going to mentally "check out" of the proceedings. 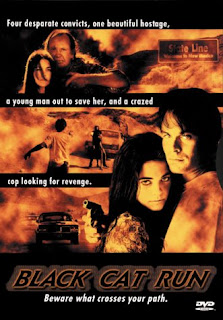 Here, at least, we want Johnny to rescue the girl. It's almost archetypal in its simplicity, but many - if not most - times in life simplicity is called for. Black Cat Run is like a throwback and an homage to 50's B-Movies but updated slightly with more bad language and violence. There's even one standout scene of outright gore. But the core of tribute to retro drive-in movies of yore remains.

As we all remember, Muldoon played Jeff on Saved by the Bell, the guy who stole Kelly away from Zack. Black Cat Run could be an imagining of Jeff's future after he graduates from college. Maybe he isn't the brightest bulb, but he's extremely well-meaning, a hard worker (as we saw with his job at The Maxx), and a good guy at heart. It could be Jeff. We as the audience were continually rooting for Jeff.

Also, a movie like this wouldn't be complete without many scenes of chases, shooting, and at least one moment of walking away from an explosion in slow motion. The credits state "Special Appearance By Jake Busey" but he's really the co-star of the film. Based on that credit alone, you'd think it would be just a cameo or something small. But you get a lot of Busey. Just so you know. That credit was a bit misleading.

In the end, Black Cat Run manages to rise above its lowly station thanks to some good decisions by the cast and crew. It's entertaining, and it's even humble, much like Johnny Del Grissom himself. If you find it, check it out.
Comeuppance Review by Brett and Ty
Posted by Ty at 4.3.22

Man, I want to see this ... Sounds like it hits a sweet spot of top-tier DTV entertainment. This is a blog that informs quite a lot of what I watch .. Good review.

Port: Thanks! We love to hear that. One thing we especially enjoy is turning people on to movies they may not have heard of before. Check it out when you can.