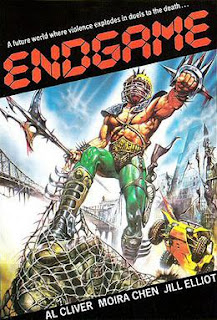 In the year 2025, a reality competition show called Endgame is the hottest thing on TV. It's basically The Running Man (1987), where costumed characters chase and try to kill the reigning champion. In this case, that would be Ron Shannon (Cliver). The baddies out to get him are Kurt Karnak (Eastman), Woody Aldridge (Rhodes), and of course who could forget Gabe Mantrax (Dell'Acqua)? But the game of Endgame is just the beginning of the tale.

It turns out that in 2025, obviously now a post-apocalyptic world, there is a race of telepathic mutants that just want to live in peace. Seeing that he's the toughest guy around, a woman named Lilith (Gemser), hires Ron Shannon to lead a band of the telepathic people to an area of safety. Stormtroopers wearing gas masks with an "SS" logo are on an extermination campaign against them.
This roving caravan now includes such new characters as Martial Arts expert Ninja (Yamanouchi) and Bull (Tinti). Of course, the military higher-ups, led by Col. Morgan (Mitchell), are not happy about Shannon's defection from Endgame so he can help the downtrodden of our society find a better life. Morgan would rather he and the other warriors perform for his amusement. Will there be a better future for Shannon, Lilith, and the gang? Or have we finally reached ENDGAME? 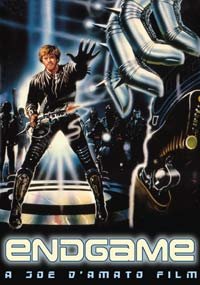 Endgame is one of many Italian Post-Apocalyptic action films (or Post-Ap's, as we call them) that proliferated during the 80's. Coming hot on the heels of Enzo G. Castellari's 1990: The Bronx Warriors (1982) and Escape From the Bronx (1983), Endgame even has a subtitle, Bronx Lotta Finale, which presumably is Italian for 'there is a lot of finale'. They must be talking about the end of the movie. While there are many more examples we can name, such as Sergio Martino's 2019: After the Fall of New York (1983), Endgame is one of two entries in the Post-Ap canon for Aristide Massaccesi (AKA Joe D'Amato), the other one being 2020 Texas Gladiators (1983). D'Amato assembles a stellar B-Movie cast with many names familiar to European exploitation fans.

The fact that Laura Gemser, her husband Gabriele Tinti (both of whom were D'Amato regulars), Al Cliver, George Eastman, Hal Yamanouchi, and Gordon Mitchell, among others, are all here, is cause for celebration. The movie around them, however, can get a bit staid and even boring at times. While the first third is certainly reminiscent of the aforementioned The Running Man - crossed with further Italian versions such as Castellari's Warriors of the Wasteland (1983) and Lucio Fulci's The New Gladiators (1984) (the latter of which also featured Cliver and Yamanouchi) - because of the 'game controlled by sinister overlords' plotline, Endgame dispenses with that after the first third and switches gears entirely to a more traditional Post-Ap scenario.

What's not so traditional is the idea of 'telepathic mutants', especially if the main two are Laura Gemser and a little boy. Some others call them "'mutes", for short (i.e., "let's go get those 'mutes!"). But because this is an Italian Post-Ap from 1983, which seemed to be the golden year for such things, we get the ragtag costumes, absurd makeup, and roughshod-slipshod vehicles driven by the crazy cast of characters. All the ingredients are there if you're a fan of this particular subgenre. Other ideas shine through as well, such as "Life Plus", a sponsor of the Endgame TV show and what would today be called an energy drink. Reality shows? Energy drinks? Mutants? Clearly D'Amato was well ahead of his time in 1983.

While we believe Endgame will satisfy Post-Ap fans, it can get a little slow and the pacing issues are exacerbated by the 97-minute running time. The budget does seem extra-low this time around, which isn't a problem for us but it may be for some people. But the cast and some of the crazier elements more or less paper over most of the flaws.

While it was originally released on the Media label on VHS, today it's streaming on Amazon Prime (as of this writing), so it can't hurt to check out Endgame. But you'd most likely have to already be a fan of the subgenre first before diving in.
Comeuppance Review by: Brett and Ty

Many thanks for continuing your well-written reviews! Both Endgame and 2020 Texas Gladiators are well worth checking out. Lotta finale means final fight (or endgame), but I like your explanation better. One question: When Russia starts WW3, do you think there will be a rush to S&M shops to dress up like in Mad Max?

Roger: One can only hope, haha!