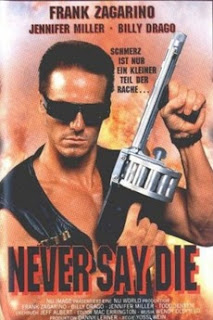 John Blake (Zags) is just a humble boat repairman...or IS he? Living in the swamps and bayous of what is presumably Louisiana (but is in fact South Africa), he keeps to himself, and he's known for being kindly to the local kids, such as Shane (Svorinic). However, trouble is brewing when a nearby cult leader named Reverend James (Drago) starts acting more unhinged than usual. Fearing a Jim Jones-esque incident, FBI man Mike Roper (Jensen) gathers his troops for a raid. A complication arises in the form of disillusioned cult disciple Brooke Hatfield (McShane), who Rev James holds hostage. It just so happens that she is the daughter of General Hatfield (Orlandini).


With Roper on the ropes, only one man can stop the evil that is Reverend James...JOHN BLAKE. Of course, Blake has a personal score to settle with James, as they were former military compatriots before James left Blake for dead in a war zone. With both Blake and James having their old unit tattoo, the "Blood Eagle" (which also could have been a good title for the film), Roper doesn't know if he can trust Blake enough to team up with him to defeat James and save Brooke. But they'll have to keep on fighting together and, you guessed it, NEVER SAY DIE.


Never Say Die gets off to a Teddy Page-like bang and the audience's interest is at full attention. There are many other great (i.e. stupid in a great way, or perhaps great in a stupid way) moments peppered throughout the film, but it can't possibly hang together throughout its 99-minute running time, and it really doesn't. It's not the first - and it surely won't be the last - time we have experienced what might be called Zags Drags.

After the bang-up opening, things naturally settle down as we're introduced to Blake and his young charge Shane. Shane is your classic "90's Kid", complete with an oversized T-shirt and JTT-esque hair. At any moment you think he's going to pump his fist in the air and shout "Yeah!" or "Radical!", and announce that he's going to kick some alien butt.
Then soon after that, we're introduced to Reverend James and his Garden of Eden cult. The audience is still 100 percent with the film at this point, especially when we see that the cult's activities mainly consist of Drago speechifying as its members sway back and forth and do some sort of "cult Tai Chi" in rooms primarily lit with candles. Drago is really and truly in his element as the crazy cult leader. Out of his countless baddie roles, he really seems to fit this one and relish it. 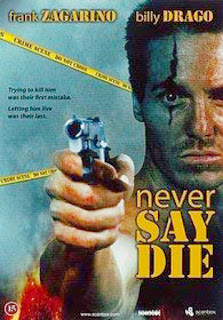 What then happens with Congressman Earl Le Roux (Brunner) is taken right out of the Jim Jones saga. We know Brooke is a cult member because she has crimped hair with beads in it. When she changes out of her flowing white robe and into a denim half-shirt, we know she's mentally out of the cult for good.


While this is some of the best Todd Jensen we've seen to date, the movie slows down considerably after the first third, as it becomes a rather standard chase-the-baddie scenario. The upbeat Jensen and the meatheaded Zagarino make a decent enough team-up, even if the movie wastes time having them be enemies at first, and for a longer period of time than they should be.
Zagarino has some nice Thunder in Paradise-style boats at his disposal, some funny shirtless or ripped-shirt moments, and one of the better and more extended "Noooooo!!!!"'s we've seen in a while. But the simple fact is that it's very hard to beat Striker (1988) and Project Eliminator (1991). Maybe it's unfair to compare every Zagarino film to those two gems. But, for Never Say Die at least, he puts the 'meaty' in 'mediocre'.

Despite the film's main, and rather obvious, problem - its poor pacing - this still remains the best Yossi Wein movie we've seen to date. Wein was a Polish-born Israeli filmmaker who primarily worked for Nu-Image. After Never Say Die, both Zagarino and McShane teamed up again with him for Cyborg Cop III (AKA Terminal Impact). McShane came back for U.S. Seals (2000), and Todd Jensen returned for Operation Delta Force 5: Random Fire (2000), among others. All that being said, it's still better than Death Train (2003).

Watching Never Say Die is like watching someone do a jigsaw puzzle who gets continually more and more frustrated while doing it. Some of the pieces are clearly in place, while others just can't or won't fit. If you really, really concentrate on the positives, it would be worth a watch, but what surrounds those positives is not that hot.


Featuring a title song - which we always love to see (or, rather, hear) - by Wendy Oldfield, which is kind of like the South African version of "You Gotta Be" by Des'ree, and an exploding helicopter (well, it's blown up while on the ground - does that count?), Never Say Die definitely has its good moments and strong points, but they are surrounded by a lot of mush during the unnecessarily-long running time.
Comeuppance Review by: Brett and Ty
Also check out a write-up from our buddy, DTVC!
Posted by Ty at 9.6.22

I thought Death Train was fairly entertaining, it was certainly better then another Die-Hard-On-A-Train movie called "Death Deceit And Destiny Aboard The Orient Express"