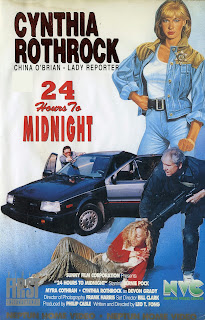 Harry Grady (Chapa) was a former mobster who changed his ways and is now about to testify against infamous crime lord White Powder Chan (Pierce). Before Chan has him whacked, Grady helpfully made a tape describing who Chan's gang consists of and where they can be found. He also includes a picture - a posed group shot of the gang (don't all criminal organizations do this?) and he leaves it for his wife Devon (Rothrock) (Power) (Stevens). Don't worry, we'll explain all those parenthetical names in a minute.

So, like any grieving widow would, Devon dons a black ninja outfit, breaks out a variety of different weaponry, and systematically begins killing off the entire gang. Meanwhile, there have been a rash of unrelated drive-bys going on in the streets. Detectives LeAnn Jackson (Myra) and Lester McQueen (Pock) are trying to clean up the crime, but they are then assigned to the White Powder Chan case. Naturally, it all comes to a head when Chan is last on the list and Devon is out for blood. It must be midnight, because it's now...24 HOURS TO MIDNIGHT.

Ya gotta love Leo Fong. Only he could come up with a jumble like this and make it as entertaining as it is. At film schools across the country (and world) they should show 24 Hours to Midnight to students who want to become editors. There's actually a very interesting user comment on imdb.com by the guy who assembled all the footage together into what we see today.


When you watch the film, you may notice that they had about three minutes of actual Cynthia Rothrock footage, and they just looped what they had over and over again. Meanwhile, they got De'Ann Power to do all the scenes in the ninja suit. On top of that, they got Brinke Stevens to be the voice of Rothrock both in and out of the suit. So it took - count 'em - THREE actresses to play the role of Devon Grady. I think most people will be able to understand the entertainment value of that alone.


As they say in the world of infomercials, but wait! There's more! The great Stack Pierce plays White Powder Chan. As you may know, Pierce is Black/African American. Why is his last name Chan? Hell, why is his first name White Powder? (well, we know it's because of drugs, but no other name is ever given). There are also a handful of funny shootouts, one of which is amongst the repeated footage. We get to see Rothrock crying in a car several times throughout the film, and at one point she goes to Juarez, Mexico to meet with Master Tanaka (which we see more than once).


Then the characters of Jackson and McQueen show up. McQueen is your classic 80's coolguy, and Jackson likes to work out in the weight room while wearing suspenders. Her voice is simultaneously flat and very soothing. This mysterious woman is credited solely as "Myra" and never appeared in anything else. What ever happened to Myra? Anyway, McQueen and Jackson have a classic WYC (White Yelling Chief) that they must answer to.


But even White Powder Chan must answer to someone as well, and in his case it's Mr. Big (Fong). Yes, Leo appears last-minute in an uncredited role as the boss of bosses.


The whole thing is a labor of love: handmade and stitched together like an old quilt. Watching it as viewers in 2020, we found it to be very enjoyable but you have to know what you're getting into. It won't be for everybody. But you can honestly say they don't make 'em like this anymore. We're not even sure they made 'em like this back then, usually.


24 Hours to Midnight is definitely an oddity, and quite rare these days to find. The U.S. VHS states "Look out Seagal! Watch out Van Damme! Here Comes..." over a huge name of Cynthia Rothrock. While her name is completely deserving to be amongst those others, perhaps 24 Hours to Midnight isn't the very best exemplar of her skills? Nevertheless, it shows that the action boom was in full force back then and even a movie like this, with all its quasi-unfinished issues, could get a nationwide VHS release.


In the end, 24 Hours to Midnight is quite unique, and while its appeal to the masses may be limited, fans of underground/weird movies and under-the-radar action will surely appreciate it.

Comeuppance Review by: Brett and Ty
Also check out a write-up from our buddy, DTVC!
Posted by Ty at 6.10.22

Rothrock ended up leaving the film after a disagreement with her boyfriend(who was one of the producers I think)so the filmmakers had to do what they could to disguise her absence.