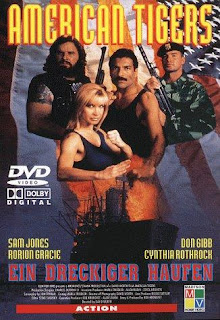 Terrorist Riley Hooker (Curtis) gets the idea to gather all the other terrorist groups from around the world and assemble them on his boat in a Los Angeles harbor. When the military, especially General Clay (Estevez) gets wind of his plan, he gets Sgt. Major Ransom (Jones) to enact an equally crafty response. They gather together a ragtag bunch of death row convicts and train them for three weeks to become a fighting force against the baddies. If they die, well, they were going to die anyway.
If they survive, they can go free. While most of the prisoners are quite obnoxious, thankfully Ransom's buddy Dan Storm (Gibb), a biker and non-prisoner, wants to help as well. Will our heroes defeat the evil lying in wait for them? They do have a special guest star waiting to train them in Martial Arts, so their odds of becoming AMERICAN TIGERS are looking better by the day.


Well, we had to watch American Tigers. We couldn't pass up the opportunity to see something with fan favorites Sam Jones, Cynthia Rothrock, Donald Gibb, and Joe Estevez all together. It also features Paul Logan and Matt McColm in small, uncredited roles. So how could it go so terribly wrong? Stultifyingly stupid dialogue, dull, lifeless, amazingly repetitive training sequences, and just an air of generalized dumbness that is impossible to deny. The endless meatheaded monotony of it all tends to grate on the viewers' nerves.


Now, there are a couple of bright spots that act in sharp contrast to the morass of stupidity that surrounds American Tigers like a cloud. First off is the brief but incredibly welcome presence of Rothrock. Inexplicably, she plays herself as a Martial Arts instructor for the prisoners. Why it had to be her, and not a character, remains unknown. It's very bizarre to have Sam Jones say to his charges things like, "Say hello to Cynthia Rothrock!" in a non-documentary context. It was just very strange. Despite her front-and-center positioning on the box art, it's really a glorified cameo. Still, why Rothrock individually beating up each prisoner in the ring is part of their training is pretty strange too.


Donald Gibb almost saves the movie, because his character is personable and likable. None of the other characters are. American Tigers, if it needed one thing - and it needed a lot of things - it would have been more Gibb. If the filmmakers were really smart, they would have made Gibb and Rothrock partners that were fighting the terrorists, and they dispatch wave after wave of goons, and forget everything else. But no, director David Worth thought it extra-necessary to have a long, drawn out tournament between a group of Navy SEALS and the ragtag misfits. Incidentally, the group is named "Tiger 525 Tiger Team", a name that's as repetitive as the movie itself.


The main terrorist has some entertaining dialogue, and the opening sequence is like a junkier, lower-budget version of Megadeth's Symphony of Destruction video. Then there's a silly chase, and we're off and running into the "no intelligence allowed" zone. If you watch American Tigers, you may have to hold on tight to your brain cells, as depletion is a serious concern here.


Should we be surprised that the director of all this is the aforementioned Worth, director of Kickboxer (1989), a movie with a lot of training sequences? The man must really think audiences want to watch men train and train for things.


The release history for American Tigers is spotty, perhaps unsurprisingly, but it did receive VHS and DVD releases in Germany, and was put out here by York Entertainment. That release is now rare. Whatever you do, don't confuse this with American Tiger (1989) AKA American Rickshaw. That's a great movie that's well worth watching. American Tigers, sadly, is not.

Comeuppance Review by: Brett and Ty
Also check out a write-up from our buddy, DTVC!

A very bellow average film that somehow has a charm to it.

I think this film is worth watching.