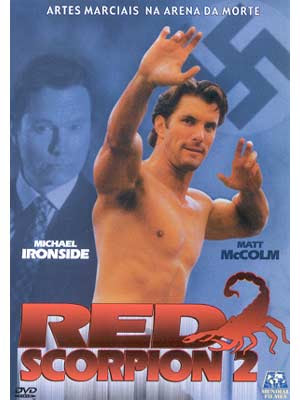 From the mind of the notorious Jack Abramoff comes...

To stop the evil neo-Nazi Andrew Kendrick (Savage) from taking over the world with the stolen artifact the "Spear Of Destiny", Col. West (Ironside) and Sam Guinness (Rubin) assemble a ragtag team to infiltrate their compound. The leader, a "roguish superagent", is Ben Affleck dead-ringer Nick Stone (McColm). Other team members include:
1. Good ol' boy Billy Ryan (Michael Covert), the sharpshooter,
2. The token computer nerd Vince D'Angelo (Ben-Victor), the irritating "George Costanza" of the group,
3. Token Asian Joe Nakamura,
4. And token black man Winston "Mad Dog" Powell (Andrews). If this were the show "Criminal Minds", he would be the Shemar Moore character. He gets to call the evil skinheads "eggs with legs" and screams loudly every time he fires a machine gun.

They are all under the command of Gregori (Touliatos). They don't need to be, but the movie needed a connection, no matter how tenuous, to the first film. Gregori claims to have trained Nikolai, as played by Dolph Lundgren. Dolph is not in this film. So now they are all in the "Red Scorpion Brigade" and have small scorpion tattoos on their arms. It all Matt McColminates with some shooting and explosions (which they should have just done from minute 1 of the movie, but then there would be no movie). 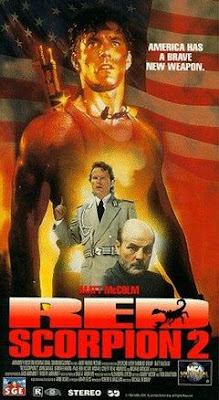 Will this team be able to work together and infiltrate and dismantle Kendrick's nefarious operation? Could Matt McColm look any MORE like Ben Affleck? Will it be "Armageddon" all over again for our heroes? And what is "Kendrick's Roulette" exactly? Find out today!

Silly fun that is brain-numbingly dumb, Red Scorpion 2 has quite possibly every cliche in action movie history. Stone is going on "one last mission", he jumps from an explosion in slow motion, the unnecessary training sequences (which primarily consist of the team endlessly rock climbing), the old abandoned warehouses, the old, dying master and much much more. 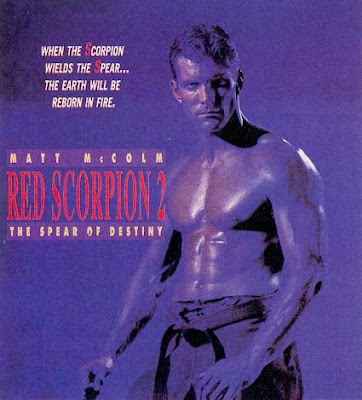 John Savage as Kendrick makes a great bad guy. When he first sees the "Spear Of Destiny" he keeps saying "Ohhhhh" over and over again. He's such an evil Nazi, he has a glove drawer. He has a command center with film of Hitler running on a continuous loop. He also has some great underlings. Mr. Benjamin's only talent is counting in an extremely ominous and strained tone. Hans (of course that's his name), is a weird cross between Dolph Lundgren, Kelsey Grammer as Frasier and David Hyde Pierce as Niles. If you've ever wanted to see a cast member of "Frasier" execute a spin kick, this is the movie for you.

By contrast, McColm as the appropriately-named Stone is about as animated and lively as petrified wood. His "martial arts" consists of clumsily slapping his opponents. Michael Ironside looks really bored and unchallenged by his pat role.

It is insulting to the audience. When we see bad guys getting away, someone says "they're getting away!" When an oil drum with the gigantic letters "GAS" rolls toward our heroes, one of them yells "it's gas!" This can also be seen in Street Fighter (1994) E. Honda says that line and Matt McColm performs a "1000 hand slap" just like Honda and both movies came out the same year. Coincidence? I think not.

Despite the fact that the movie is silly, dumb and cliche-ridden, we loved how funny Red Scorpion 2 is and we had a lot of fun watching it.

Discover the "Spear Of Destiny" tonight with this classic!

It seems as if this is very inspired by the computer game Wolfenstein 3D. The sequel to that game was called "Spear of destiny" and the boss in the first episode is called Hans.

Great point! That is really funny. Thanks for your comment.

I thought Hans was just another tired Die Hard reference for when they run out of any other Russian/German sounding name (i.e. Boris, Pavel, Chekov, Natasha, Karl, Protrovsky, blah blah blah).

We always say that too! They'll never tire of calling people Hans. Haha.