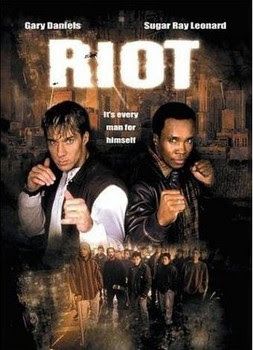 
We here at Comeuppance Reviews would just like to say Merry Christmas and happy holidays to all of our readers. Thank you so much for your support, it means so much to us.

Keeping with the theme of Christmas, today we have the PM gem Riot - a film that takes place during the "Christmas Eve Riots". Shane Alcott (Daniels) is a former SAS soldier in America to train U.S. forces. All he wants to do on Christmas eve is do a little training, rescue the neighbor kids Sue and Johnny after Johnny stupidly puts a microwave pizza in the oven while still in the box, and have a beer at the local hangout with his buddy Maj. Williams (Leonard). But OH no, Shane can't get a moment's peace. During the riots ravaging the city, an evil gang of Crips, working in conjunction with the IRA (bet you never thought you'd see that combination) kidnaps Anna Lisa Gray (Rowland), the daughter of Ambassador Gray (Ron Barker), and love interest of Shane. So, Shane ventures into this urban war zone to rescue the girl. With some help from his compatriot Williams, Shane must battle an army of street thugs, Crips and IRA, led by the sinister Bryan O'Flaherty (Kilpatrick). Will Shane prevail? 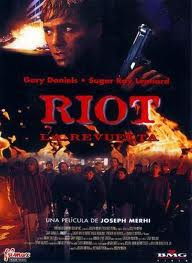 Riot's plot is as standard as they come - action hero must rescue the girl - but it is cloaked in the device of the "Riot". PM, staying attuned to the times, was obviously trying to capitalize on the L.A. Riots, Rodney King riots, and the riots that occur every time the Lakers win or lose any of their games. Throw in some elements from The Warriors (1979), Escape From New York (1981), and Jungleground (1995) with Roddy Piper,  add Gary Daniels and Voila - you have a movie perfect for the direct to video market.

Additionally, the solid B-movie cast helps things a lot. Patrick Kilpatrick is dependable in anything we've seen him in, and the puzzling, but successful casting of Sugar Ray Leonard of all people works because he's a great counterpart to Daniels in the fight scenes. Daniels' style is more Asian-influenced, while Leonard brings the boxing flair. Dex Elliott Sanders as the evil Leon "Shy Boy" Hughes is also worth mentioning . And let's not forget Charles Napier cast once again in a nothing role as a commander, this time named Devaney. The cast tries to bring as much emotion as possible to the proceedings. But really, the film is non-stop action. The desolate urban landscape with its burnt-out cars provides a great obstacle course for our hero. Some of the stunt scenes are absolutely amazing and the people that worked on them deserve all the accolades in the world. Special mention goes to the scene towards the end where a bunch of baddies on motorbikes attack Shane. PM outdid themselves on that one. 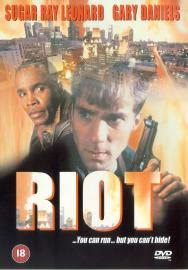 Another thing PM was trying to do here is explore the so-called "urban" markets (this also includes the Master P-helmed No Tomorrow and Hot Boyz - both 1999).  Racial tensions are played up in the film, but what the audience really wants to see is Gary Daniels do what he does best. In this case, it's decimating entire baseball and hockey teams with his awesome moves. Also the audience wants to watch Sugar Ray Leonard pilot a helicopter. And speaking of giving the audience what they want, it is worth noting that the kid from the beginning, Johnny, has a framed picture of a hamburger on his wall. If you can explain this, please write in today.

For a CHRISTMAS-themed action-packed thrill ride, look no further than Riot.

I wasn't a big fan of this one. I mean, it had it's moments, but overall, it kinda didn't do it for me. Plus, it was very politically charged in favor of the Brits vs. the Irish, and didn't give a very accurate portrayal of that struggle. For me, politics and action movies almost never mix.

Hmm. Interesting take on it. There's always some political agenda that PM puts in their movies. Last Man Standing and Rage have a leftist bias.

We just got swept up in the cool Gary Daniels action. A lot of great stunts in this one.

Been an on & off fan of Gary Daniels for a while now after Fist of the north star and Tekken, and decided to finally check out more of his work.

As usual with direct to video releases, you kinda can't help but go in expecting mediocrity. Afterall without the hollywood buzz one would think filmmakers kinda lack the incentive to put on a quality effort. However, i was pretty impressed with this release. They went above & beyond the call of duty here with lots of nice action through-out.

3.2 out of 5 from me. Its not fantastic but still a pretty decent action flick.

Can't agree more. This was solid Gary Daniels flick. If you liked Riot, check out Recoil and Rage. They are just as good.