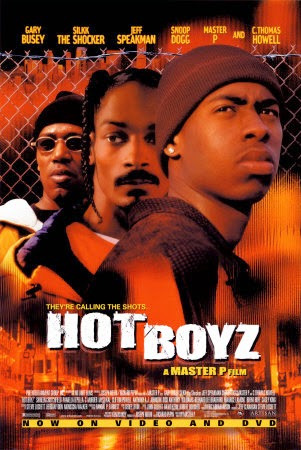 Hot Boyz is the sad and tragic tale of Kool (Tha Shocker) and his homies (not something gay as you might reasonably expect). Kool is an aspiring rapper who is probably still aspiring because he can’t come up with a better name for himself than Kool. He and girlfriend LaShawna (Crutchfield) are in love, despite the protestations of her mother, who disapproves of Kool’s homie-ing ways. One night while walking down a dark alley (always a bad idea, especially in the ‘hood), LaShawna witnesses a murder and is then accused of it and thrown in jail. It turns out she stumbled into a network of fully corrupt cops like Officer Mack (Huff) to pretty corrupt cops like Det. Tully (Busey) to not-that-corrupt cops like Officer Roberts (Howell).

While fighting for LaShawna’s release, Tully convinces Kool to infiltrate the criminal organization run by Saint (Powell).  But when things take a turn for the worst, Kool and his homeboys C-Dawg (Snoop Dogg, stretching), Moe (Master P), Remo (C-Murder), Tyrel (Mystikal), and Pee Wee (Johnson) suddenly become crime lords in their own right. Will all this gangsta-ism lead to a bad end for Kool and/or the gang? Also Jeff Speakman is Kool’s Kenpo teacher. Kool takes Kenpo lessons. 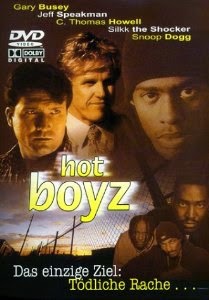 Here is your classic example of what we call the “homie movie”, but because it’s also a PM movie, it has C. Thomas Howell, Gary Busey, Brent Huff and Jeff Speakman in non-homie roles. And also a bunch of shooting, car chases, and other PM hallmarks. In between most scenes there is an aerial shot of L.A. while some No Limit rapper lays down his poppin’ fresh rhymes.

And behind scenes of C. Thomas Howell or Gary Busey talking, there are yet more rap beats. And of course, during any chase scenes, more rapping can be heard. Pretty much every homie movie cliche is out in force: barbecue parties (where Snoop doles out potato salad), bouncing cars, basketball games, evil whiteys (especially cops), and young ghetto-dwellers dreaming of escaping using the time-honored methods of drugs and violence. I guess it’s what you’d call “Master P’s Theatre”(groan).

Sure, you feel every aspect of its low-budget, but certain personalities shine through. Clifton Powell and Shireen Crutchfield stand out as the baddie and Kool’s inexplicably devoted girlfriend, respectively.

And you’ve got to respect Snoop - he remains one mellow cat at ALL times, whether hangin’ with his homeboys or shooting a bunch of people in a (wildly extended) shootout. For this reason, he comes off as highly naturalistic, especially compared to his screen-mates such as Mr. Tha Shocker, who is clearly trying, but in a way that suggests a child trying to fit their little feet into their parents’ shoes.  As for the fan favorites, Howell doesn’t do all that much, Huff is one-dimensionally evil, Speakman’s role is largely unnecessary to the plot (although it was welcome and we wished there was more of him) and Busey is Busey. Busey is no stranger to the ‘hood, having also been in Down ‘n Dirty (2001) and On the Edge (2002). 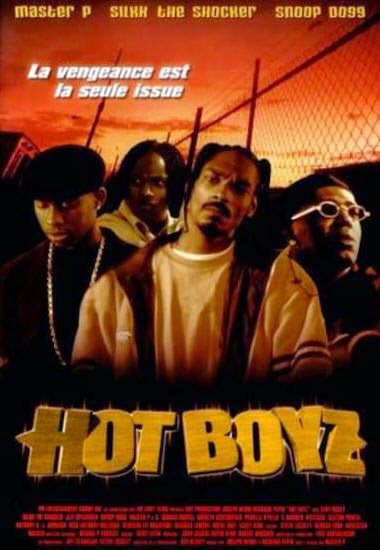 It almost goes without saying, but Scarface (1983) seems to be a natural jumping-off point, at least for the second half of the movie, where the “Hot Boyz” are born and form their own criminal empire. When Kool earns his black belt, Master Keaton (Speakman) says to him “now you’re a man”, and later, Saint congratulates him on going from a boy to a man. The movie also could have been called “Bar MitzvahZ”.

But we don’t think you’re supposed to think about it all that much, just get your own group of “Hot Boyz” together, pour out a 40 for your dead homiez, and pop in the DVD. If this is your thing at all, you’ll be in homie heaven.

Also check out write-ups from our buddies, DTVC, The Video Vacuum, and The Unknown Movies!

I thought this film was pretty decent, one complaint I had is that certain scenes would've been better had they been placed in a different order, for example the opening car chase, while really well done, would've fit much better at the end of the film, since by that point we actually know who the character driving is, that would've added more tension and been more effective.

Also it seems like two unrelated scripts were combined together, one about the whole "get revenge on a dirty cop" thing, and the other on the whole "gang-bangers rise to power" story.

As far as PM Entertainment's "hood" films go, No Tomorrow was superior overall.

of PM and some wellknown genre actors. Watched it one time and then dumped it in the abyss of my collection.

Harry: Can't agree more. This was a weak PM.

This was one in a series of rappers-turned-actors action movies that appeared in the late 90s/early 00s. What was it that made rappers think they could act and direct action movies? Hubris? Delusion? Tax write-off? Money laundering? Hell, they were probably high at the time. Anyway, the results were Prerequisite Torture of the viewer. Hot Boyz was slightly better than most of its ilk.

All of your theories are correct. Especially hubris and delusion. Haha! We needed quick and cheap video store product.

Disagree there, I don't think they were torture and I think rappers have actually made some pretty good films and some are pretty good actors.