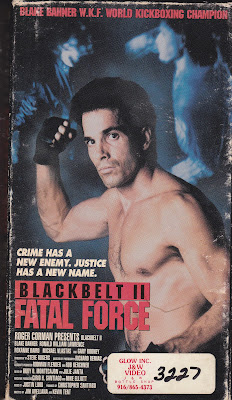 
Brad Spyder (Bahner) is an L.A. cop with an attitude problem. He must travel to Hawaii to investigate the death of a partner. His “punch first and ask questions later and then punch them again” style means he encounters resistance from the local cops, led by Akida (Diaz). There’s also some nonsensical mumbo-jumbo about Vietnam and POW’s that was only put in because of the piecemeal patchwork that this is...

Technically speaking, we’re not entirely sure this is even a movie. By any rational standard, editing, splicing, and re-ordering film footage doesn’t necessarily make a film, much less a coherent piece of entertainment. The editors here get an A for effort, as they try desperately to make disparate footage fit together, but it’s like trying to join two puzzle pieces together that clearly don’t fit.

Going from L.A. to Hawaii to Vietnam, to a Vietnam that’s supposed to be Hawaii, we get some narration about Vietnam, then some urban cop action with Bahner, then it reverts back to an Exploding Hut jungle movie, and on and on. There’s zero character development along the way, so you cannot become invested at all in what’s going on. Rather than introduce the slightest bit of character for Brad Spyder (aside from his awesome name), the movie just jumps into an overly-long, protracted punching sequence on top of a building. Then there’s the amazingly cliched Irish police chief O’Donnel (Dulaney) - actually a lot of this movie could be a parody. 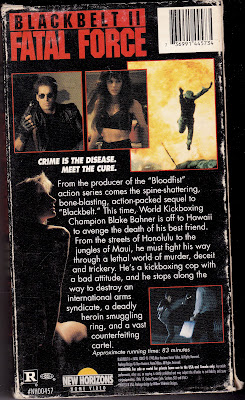 Bahner yells all his lines, and resembles Andrew Dice Clay (who had a brief action movie career of his own). Presumably Roger Corman felt he could put out this mishmash as some sort of “sequel” to the Don the Dragon movie Blackbelt (1992), seeing as it follows the formula of being 80 minutes and having at least Bahner’s credit also include his kickboxing title underneath it. Firstly, Bahner is no Don the Dragon, but perhaps he’s not supposed to be.

Corman caught lightning in a bottle with one action star, and he tried again and basically failed. Secondly, releasing this hodgepodge to the public is actually insulting to our intelligence. Did he, or anyone else, not think we would notice all the glaring Frankenstein-like parts to this?

Blackbelt 2 could have used another B-movie name in the cast (aside from the ubiquitous Vic Diaz), or a rockin’ song, or a scintilla of coherence or cohesion - anything except falling back on references to the First Blood series, which it does. But on the bright side it does have a rich businessman named Roderick Pendleton (Holme) and a character named Weasel (Louie Del Castillo), whose hair and mustache out-Oates-es Oates. His entire film career consists of this, the “movie” Spyder, from which the footage for this was taken, and Saigon Commandos (1988). Now that’s a career to be proud of.

Now might also be an opportune time to mention that there’s always an annoying character named Squid, Spud, Baby, Weasel, or what-have-you. Feel free to write a comment if you can think of another example.

Seeing as this footage (is it really a movie?) consists of nothing, you can’t help but regard it as a waste of time. Sad really, as the name Brad Spyder deserves more.

Was this movie actually filmed after Blackbelt? Or was it the 1988 movie Spyder, released as Blackbelt II to cash in on the name? I have been thinking about buying this one for some time. I have a tendency to like cut-and-paste movies with random scenes as long as they have plenty of action. On the other hand, you were not impressed. So many low-budget action movies, so little time.

I think it was filmed before...you're right, it's just Spyder with some new Corman footage. Cut and paste movies are usually fun...especially Godfrey Ho movies. Haha.

We were disappointed because it should have been like Blackbelt 1. More martial arts...less jungle...this time around.

Oh dear. I just bought this along with the first film from Corman's webstore. Didn't realise it was cannibalised from Spyder, of which I just got the VHS. Saigon Commandos is a fairly boring jungle film too, with atrocious sound.

I didn't think this film was a waste of time, it was sporadically entertaining though not all that memorable, I agree that Bahner wasn't much of an action star, he can fight but can't really act.

Explosive Action: Oh no! Saigon Commandos is a disappointment too...Should have been so much better.

Venom: Bahner should have been in more movies, maybe a punchfighter so he can show off his martial arts better.