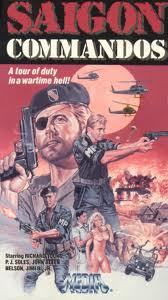 A murderer known as the “Hollow Point Killer” is running around the streets of Saigon in 1970. Sgt. Mark Stryker (Young) is a member of the 716th MP Battalion, and he and his fellow MP’s are tasked with stopping the seemingly-senseless killings. Along for the ride is AP reporter Jean Lassiter (Soles). As all of this is going on, there is political revolution in the streets. A group called The Association For Good Government (which seems to be a pretty reasonable name) is headed by the revolutionary Tri (Gamboa). However, Tri just happens to be in cahoots with the evil drug lord/gangster Quy (Medina). Why would they try to make the USA look bad and pin the murders on an American? Why would they depend on each other for their own ends? All questions will be answered by the SAIGON COMMANDOS...

By this point in our movie-watching careers, we’ve probably spent more time watching Vietnam movies than some active-duty soldiers actually spent in Vietnam. But this one is a little different as it’s not strictly a jungle slog, it’s more a story about the MP’s and their police work, on the city streets of Saigon. So in that sense it’s a different take on the subject matter. However, Saigon Commandos still comes out as a standard-issue Corman ‘Nam movie that easily could have been directed by Cirio Santiago.

Even though Richard Young was in the far-superior Final Mission (1984), and of course the movie at hand today, we still don’t know what he looks like. Such are his undistinguished features and lack of personality. But he does team up with his great Final Mission co-star Jack S. Daniels. Also onboard is mainstay Joe Mari Avellana (who co-wrote Final Mission), Willie Williams (again of Final Mission, as well as Savage Justice), as well as Cris Aguilar and Louie Del Castillo, who both have been in plenty of movies of this type. On the other hand, it’s nice to see P.J. Soles, who doesn’t often appear in this style of  film, but we felt wasn’t used to her full potential here, playing the cliched reporter role. Unfortunately, we’re a long way from “Always On My Mind”.

The movie has unnecessary narration, but still lacks character development. The action on show is pretty minimal, there are some standard machine-gun shooting scenes and a few chases. This is nothing a better pace and less talking, not to mention more (and better) action scenes wouldn’t solve. Plus the main hero needs to be stronger, and the main villain needs to be more delineated as well. Those are major sins in an action movie. Putting a few rockin’ guitar solos behind what action there is, while welcome, can’t paint over the movie’s deeper deficiencies. So as it stands now, Saigon Commandos is not engaging and falls under the heading of “Box Art Is Better Than The Movie”. (Thank you to Jack J from When The Vietnam Raged In The Philippines for the box art below) 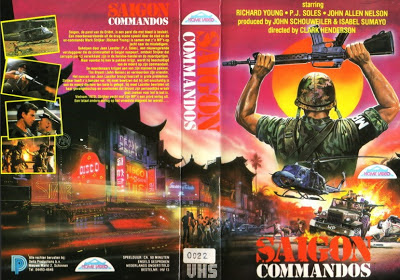 As far as this being yet another movie where the hero is named “Stryker”, we thought that would be a recipe for success. Sadly, it was a disappointment. But we had an idea for a movie called “SuperStryker” (or maybe “Striker” with an I, we haven’t decided yet), where all the action stars who have ever portrayed a character named “Stryker” get together and raise hell in the jungle. We imagine it would star Wings Hauser, Richard Norton, Richard Young, and maybe even Frank Zagarino. (Sure, no one actually called him “Striker” in “Striker”, but hey, he's clearly Striker in all of our hearts. Plus we’ll get that little kid from Hostage who uttered the immortal line “Mommy, where’s Striker?”). Don’t you wish your name was Stryker?

As far as the political scenes, people have homemade banners that say “Our country is a sewer”. This doesn’t exactly help people who read the sign know what they WANT, but they do seem to love statements of fact concerning their destitute situation. The plotline closely follows the “El Presidente” model we’ve discussed many times. But instead of a South America-set actioner, this might be the first Asian “El Presidente” we’ve yet come across. But there is a band in the movie called the “Eurasia Band” who do covers of “House of the Rising Sun” and “Midnight Special”, so that’s a bridge between cultures.

Released by the great Media label, sadly, despite all it has going for it, Saigon Commandos was a letdown.

Comeuppance Review by Brett and Ty
Posted by Ty at 25.3.13

Yeah, this film was a little slow moving for me, not bad, but Clark Henderson's other films(Warlords From Hell, Circle Of Fear, and Primary Target) were better made and more entertaining.

We haven't seen the ones you mentioned yet, but we are glad to know that these are better. Thanks for the suggestions.

Thanks for the link, and that's a cool review (one that I'm certainly not going to argue with).

I haven't seen any of those other films Venom mentioned but will put them on the endless list of films to seek out. ^_^

You're welcome! We haven't seen them either, and there's always so many more.

I've got the Australian VHS of this and agree, it could have been better. The sound on my edition was appalling, too.

That is unfortunate about the sound! We are in agreement...this movie was disappointing.

This film was based on Jonathan Cain's 12 book series, "Saigon Commandos," which were stories from the veteran MP sergeant Nick Uhernik, who himself wrote the 4 book series "War Dogs." Some say he also penned the delicious "Chopper-1" series - all literary licorice for diehard lovers of the pulp paperback adventure novels of the 80's. I read somewhere this guy went on to become a PI and was killed in a shoot-out in Little Saigon in the early 90's. What a waste. He had such potential...