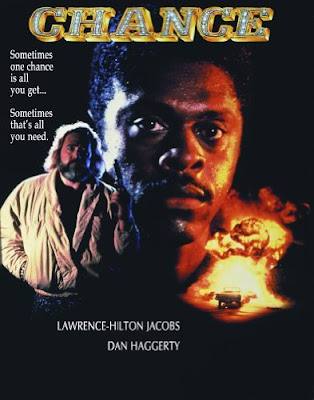 
Det. Jon Leroy Chance (LHJ) is an L.A. Cop On The Edge. After he is put on suspension by your classic WYC (or White Yelling Chief), who tells Chance that he’s “made a lot of enemies because of your freewheeling style!”, he reconnects with old partner Zachary “Zack” Chamberlain (Haggerty). Zack is an alcoholic who’s fooling the world that he’s now sober. He now works for a repo company for a living. After a diamond heist orchestrated by arch-baddie Kingsley (Rodd), the loot is hidden inside a Plymouth Barracuda. Zack, unaware of the connection to the diamond heist, repo’s said Barracuda. Now Kingsley is angry and is willing to send his entire army of goons after whoever has the diamonds, and he believes it is Zack, and by association, Chance. So now Zack, Chance and mysterious Indian Bear (Coviare) must fight for their lives and to clear their good names. Can they do it?

If you’ve been following the Chance series - and if you care at all about good movies, you are - those of course being today’s movie at hand, plus L.A. Vice (1989), L.A. Heat (1989) or the similar but non-Chance outing Quietfire (1991), clearly you will want to check out this final installment of the cinematic works of one Jon Chance. If you happened to have seen any of the aforementioned movies, you will know what to expect, it’s more of the same (in a good way). If you haven’t, let’s just say they have a unique cinematic style. The acting, action, and technical aspects will transport you to a more innocent time. That being the early-90’s video store, of course. PM always provides entertainment in one form or another, and they don’t disappoint with Chance. 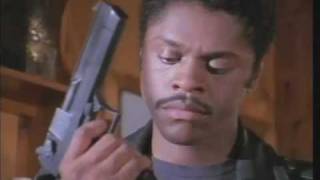 Chance features two powerhouses teaming up. LHJ has a lot of great quips and one-liners (he even gets a credit for “Additional Dialogue”), and his all-black “NOW I’m ready for action” outfit makes a reappearance. He really seems to care about Chance and how he portrays him, after all. Dan Haggerty plays the bearded, long-haired, chunky action hero who hides his Jack Daniels in the toilet tank. We applaud whoever thought it was a good idea to take a man who looks like a young Santa Claus and put him in physically demanding situations like running, climbing hills, punching, chasing, gun-shooting and more. Haggerty proves he can still hack it with the skinnier action stars of today.  You might even say his team-up with LHJ makes them the Laurel and Hardy or Chris Farley and David Spade of action.

It should also be mentioned that Zack has his own nickname for Chance, “BuddyPal”. Just simply “Buddy” or “Pal” can’t truly convey the man-to-man love he has for him, so he combined the words for maximum effectiveness. While we haven’t, at the time of this writing, seen Repo Jake (1990), it seems Chance is an extension of the Repo Jake storyline or characters. But here Haggerty is “Repo Zack” instead.  LHJ has his own dialogue inventions, as every time he answers the phone, instead of saying “Hello” like some kind of nerd, he coolly intones “You’re On.” It’s a shame the Chance trilogy had to end here. 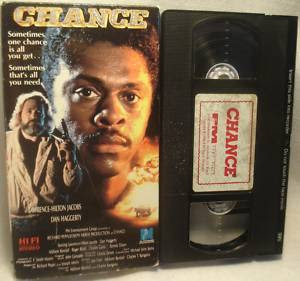 Jastereo Coviare returns as a rural Indian, this time named Bear. Not to be confused with the Bear from fellow PM movie Maximum Force (1992). I guess if PM is going to introduce a foreigner of some kind, they’re only allowed to use one animal name. While we don’t know who he is, a man named simply Gold plays a character in the movie called “Red”. If anyone out there knows who the enigmatic Gold is, please write in today. Speaking of classic names, Roger Rodd plays the ponytailed baddie Kingsley. You can tell he’s evil because of the ponytail and some kind of faux-British accent.

After this, co-director Addison Randall went on to work with Malibu in The Killing Zone (1991), which is on DVD and worth checking out. The other director on this project, Charles Kanganis, went on to work with Traci Lords on A Time To Die (1991) and Intent To Kill (1992). So Chance was a springboard for their careers and they both ended up giving us more choices in our local video stores. It truly was a golden time.

While it’s probably been said before, we encourage those with a sense of humor to take a chance on Chance.

Yeah LHJ is a great actor, too bad nowadays he mostly stars in crap like Sublime, the last good film he did was Killer Drag Queens On Dope, you should check out that one and Tuesday Never Comes.

That is unfortunate. He needs to make a comeback.

Turns out my copy actually has a different cover then the one posted here, this is the version I have:http://www.ebay.com/itm/Chance-Crime-Action-Thriller-VHS-1990-PM-Lawrence-Hilton-Jacobs-Dan-Haggerty-/302373204093?_trksid=p2047675.l2557&ssPageName=STRK%3AMEBIDX%3AIT&nma=true&si=iI5a1jlbaaeT2Af0X%252FApualxSnE%253D&orig_cvip=true&rt=nc