Ed Cooper (Connors) is a former Vietnam vet who had a son many years ago with a Cambodian woman. Now, Sam (Eaton) has come home to the Cooper family in Los Angeles. He’s welcomed to the U.S.A. by the Coopers’ biological son Matt (Zagarino), family friend Cotton (O’Neal) and Matt’s girlfriend Jessie (Aliff of Damned River fame). However, spoiling all this newfound family bliss is a gang of baddies, the head of which is the slick Ace Duran (Silva).

Dispatching his best heavies, Felix (Teague), Loc Syn (Diamond), and Majyk (Z’Dar) to the Cooper household after breaking out of prison, they aim to get revenge on Ed for putting them behind bars. They were running heroin back from Vietnam, and Cooper simply reported them. After attacking Ed and Martha (Golonka) Cooper, Sam, Matt, Cotton and Jessie decide to forgo the police and get revenge themselves. Will they do it?

Mindless, nonsensical and brain-numbing, Trained To Kill gives new meaning to the word “stupid” - and we mean that in a good way! Fan favorite and personal hero Chuck Connors is back once again with his Brooklyn Dodgers jacket, and thankfully this is Frank Zags’ least annoying major role that we’ve seen to date. There’s a triumphant training sequence, Eaton puts in a lot of much-needed energy, and it features Robert Z’Dar with a flamethrower. His name in the movie, Majyk (pronounced as “Magic”) isn’t the most intimidating name for a bad guy, however. There’s the prerequisite torture, and Harold Diamond is a top-notch meathead. 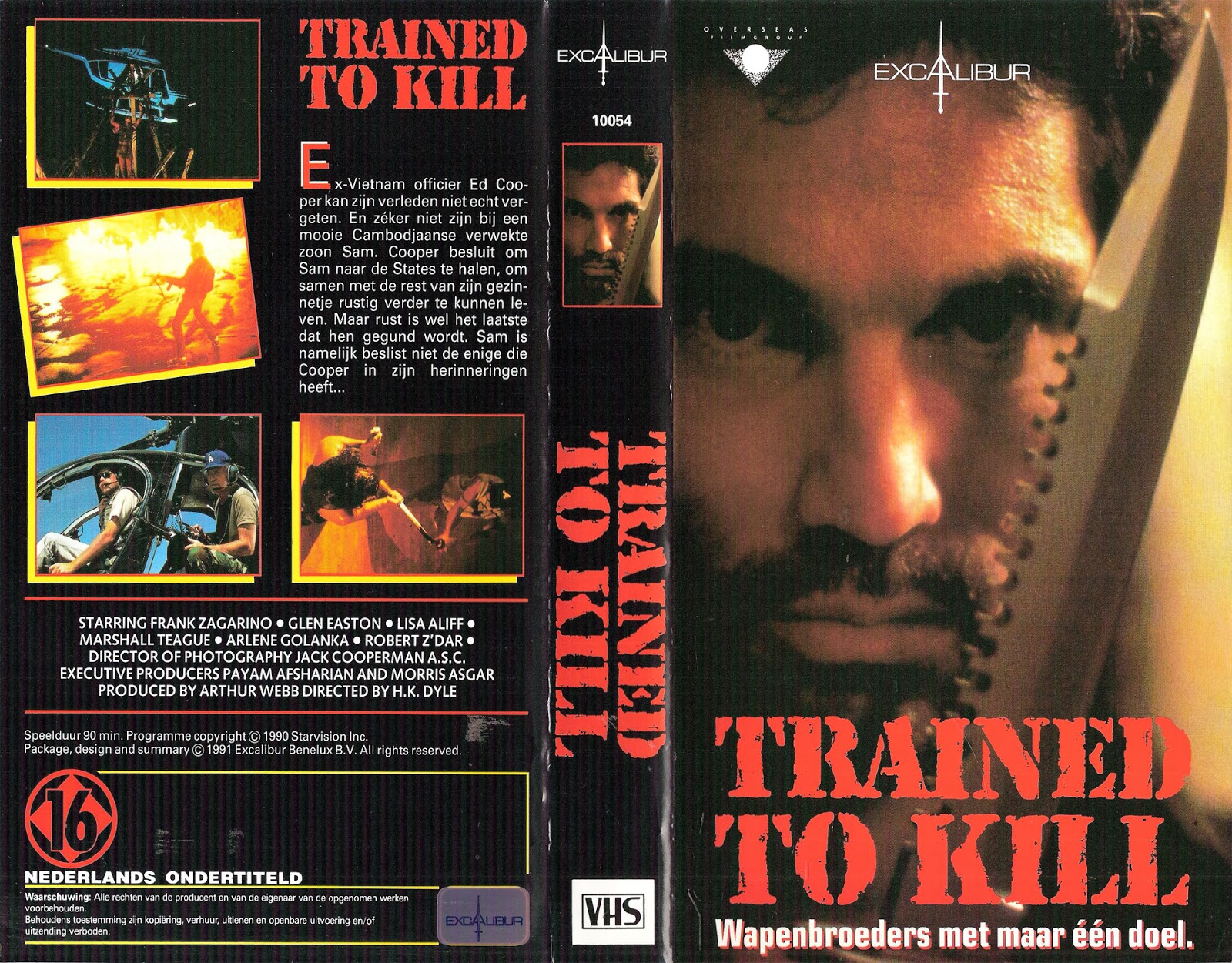 The fact that the movie starts in Cambodia with some guy with the most obvious piece of cotton glued to his chin as some sort of facial hair, then moves to the U.S. with Chuck Connors as a guy who takes in foster children and decorates his home solely with travel posters should give you a hint of the ridiculous nature of this movie.

Ron O’Neal gets into a swordfight, there’s at least one exploding helicopter, and Frank Zagarino sets a new standard in ripped shirt technology by the end of the film. This is a movie that, by all rights, SHOULD have been simply shelf-filler, but, by its sheer silliness, rises above its station to become an entertaining movie.

Released on VHS by Malofilm, a company we’re not familiar with, on EP mode, the quality is not the best. But if you ever see Trained To Kill anywhere, pick it up. For the star-power alone, it’s worth having.

This film was also released on VHS by Prisms entertainment, that version is better quality then the Malofilm release.

Great review! H. Kaye Dyal-ed up a great cast for this solid movie. Zags' performance and the OTT-ness of the action make it above average. My copy is a US VHS in SP mode released by Prism. On the back cover, it says that the movie has been rated EM-Extremely Mature by the F.A.B.-Film Advisory Board.

It is a must see/buy. Got the VHS.

Venom: Interesting. Didn't know it was on two different labels.

Roger: Thanks! Haha about Dyaled-up. Frank at his best. Got to love the FAB board. lol

Harry: It definitely is! Fun movie. Same here...also own it.

Malofilm was a Canadian video label, so you guys somehow got a copy that was intended for the Canadian market. That's probably why you never heard of this company before.

Bought the tape on Amazon...i guess the seller had the Canadian VHS. Haha.

Found this on tape a while ago! Just watching it now!

Nice! Definitely tell us what you think