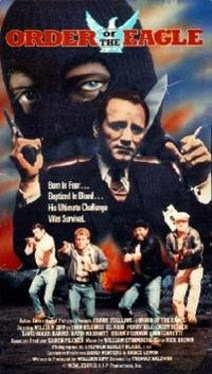 When an awkwardly dorky boy scout named Greg (Casey Hirsch), during the course of his normal wilderness-based activities, finds some secret government computer discs (of course) related to the Star Wars program, all of a sudden he becomes the target for trigger-happy goons under the command of the mysterious Mr. Quill (Stallone). Quill’s head yahoo in the field is Joe Piscopo doppelganger Leo (Harris).

Thankfully, Greg isn’t alone during his trials and tribulations. Country folk such as the kindly Monica (Foors), the seemingly-confused Freddie (Hill), and the awesomely mustached n’ mulleted John Billings (Zipp) are here to help the aging boy(?) scout as he nears adulthood. Who is Mr. Quill and what are his true intentions? Will Monica, Freddie, John and Greg survive to tell the tale? Why are there ninjas in the first scene but never again - and what is the true meaning of the ORDER OF THE EAGLE? Dare you find out?

Order of the Eagle is standard-issue AIP stupidity, and is quite enjoyable for that reason for about the first half. It has that funny-dumb nonsensicality we all love and enjoy, starting with the fleetingly and incomprehensibly-seen ninjas as they see the greatest Newsweek cover of all time, to the hilarious dubbing, and finally to our hero, William Zipp (who is all over the movie, acting as star, stuntman, producer and writer) - seemingly a more-built version of our beloved Zap Rowsdower. With his award-winning mustache-mullet combo, truly he is a classic hero for the 80’s. 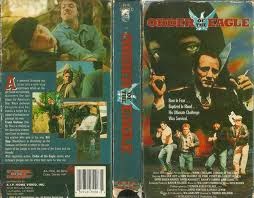 After some initial scenes of brilliance, such as when Freddie inexplicably changes hats (from what can only be described as a “corncob hat” to a more standard fedora) for no known reason human beings can comprehend, sadly the movie slows down to a more run-of-the-mill wilderness jaunt. This sort of thing was evidently huge from the mid-80’s on, as Hunter’s Blood (1986), Trapper County War (1989), Skinheads (1989) and Endangered (1994), among others, prove. Perhaps the most apt comparison is to Edge of Honor (1991), because of the boy scout connection. But Skinheads is apt as well because the box art makes it seem like something other than a wilderness slog.

This is director Baldwin’s sole directorial effort, though he did work in other capacities on various AIP movies. It seems he was trying to revive the glory days of Deadly Prey (1987) - which was only two years previous - but to no avail.

It hurt the movie that there was such a minimal amount of Frank Stallone, but the final nail in the coffin was the absurd score of the film. It’s this bombastic Bugs Bunny music that would be way more at home in a Looney Tunes cartoon. At any moment you think William Zipp is going to say “meep meep”. Other times the music would be more at home on a show like Matlock or The Andy Griffith Show - something with Andy Griffith anyway. And the end credits music is an overt Danny Elfman knockoff, to the point where you can pretty much add your own vocals from The Nightmare Before Christmas (1993), should you so choose. It’s all just TOO scored, and inappropriately so.

The thickness and fullness of William Zipp’s mustache fluctuates throughout the movie, which dictates the greater or lesser scenes. When the mustache is in full bloom, the movie is better. Once it’s shaved down, the movie slows down. The two things are intimately interconnected. So what you’re seeing all depends on that.

I thought this film was fun, though I agree that the score was utterly ridiculous, I longed for some classic 80s synth music that's practically become a stable for action movies.

Totally agree, this needed a cool score. It would've helped so much.