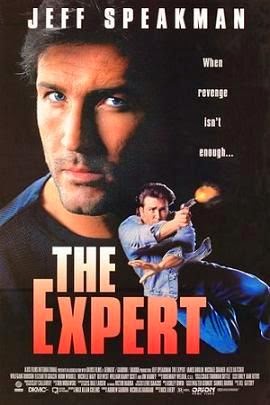 John Lomax (Speakman) is a civilian military CQB, or, “Close Quarter Battle” instructor. When his beloved sister Jenny (Nagy) is tragically murdered by a serial killer named Martin Kagan (Shaner), initially Lomax is satisfied when Kagan is sentenced to die by going to the electric chair.

When an inexplicably sympathetic doctor, Alice Barnes (Datcher) insists that Kagan is schizophrenic and that any and all murders were committed by his alter ego Martin Mirman, the dangerous psychopath is granted a stay of execution. But not for long, as an incensed Lomax decides to put his CQB skills to work to finally erase Kagan from the planet. But first he needs to get weaponry from his old buddy Snake (Varney) and find time for romance with reporter Liz Pierce (Gracen). Will Lomax’s Expertise be enough to get the proper revenge?

The Expert starts off in classic Martial Arts movie style, with a shadowy figure displaying his moves as the opening credits roll. Unfortunately, the rest of the film doesn’t live up to this promising intro. The actual action scenes are minimal, and Speakman only Kenpo’s it up on the baddies a scant few times. The first major action scene feels strangely slow and confused. A lot of the running time is spent as a Prison Slog, with no action whatsoever. Despite the presence of James Brolin as the warden, these scenes are ultimately pointless. We liked the moment when Brolin becomes unhinged, but overall neither he, Speakman, or the rest of the cast can overcome the mediocrity within. 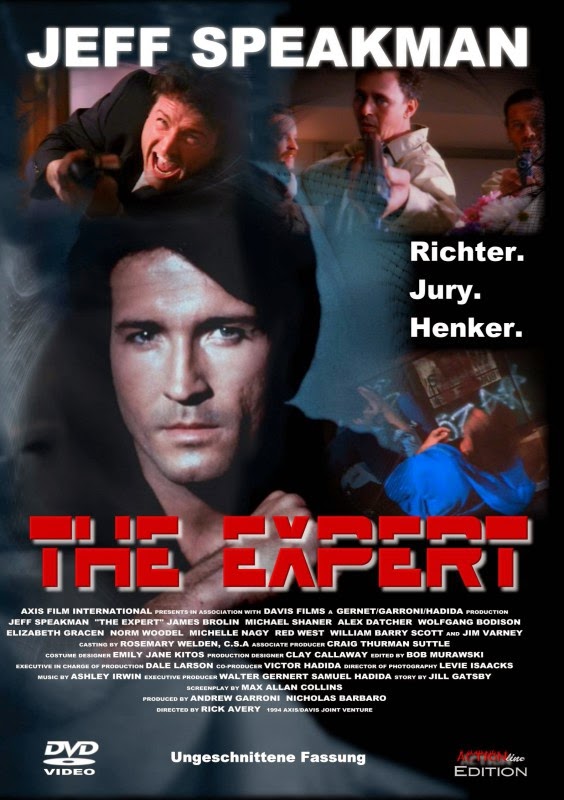 Michael Shaner, who we remembered from Bloodfist (1989) where he played the infamous “Baby”, and Angelfist (1993), or possibly other movies with the word “fist” in the title, portrays the main baddie in a  boo-hiss hateable style. His resemblance to a young Robert Davi made us believe fan favorite Davi also could have assayed the role.

Because of the fact that when we first see Martin Kagan he’s fixing a copying machine and has ink on his face (and because the camera keeps cutting closer and closer on to his leering face with each successive loud musical stab), we were prepared for a first, an evil copying machine repairman. Sadly, despite the hilariously ham-fisted telegraphing of his evilness, he was just your standard baddie.

Let’s not forget that Jim Varney is also onboard as a Vietnam vet who works at a store called Gun City USA. Now that’s what I call shop ‘til you drop. Even though it’s a glorified cameo, it was nice to see Ernest himself call Speakman “The Best” and act as this movie’s Machine Gun Joe.

Elizabeth Gracen played the typical female reporter, this time resembling Teri Hatcher, not to be confused with fellow cast member Alex Datcher. The main problem with The Expert is that it ceases to be an action movie for vast portions of the running time.

And anyone renting or buying a Jeff Speakman movie called The Expert isn’t expecting that, and it’s a disappointment. Supposedly the great Larry Cohen and the equally-great William Lustig had something to do with this production, but went uncredited. We can see why.

A prime example of 1995 video store shelf-filler, regrettably, we were not impressed with The Expert.

You're absolutely right about this movie. We came to watch a martial-arts expert, not Speaking with Speakman.

Yeah as far as Speakman films go, this one isn't that great, you're better off with Street Knight, Memorial Day, Deadly Outbreak, Land of the Free, Timelock, Plato's Run, Striking Range, Scorpio One and Running Red.

Roger: Haha. If Speaking With Speakman was on a news channel like CNN or Fox, would totally watch that. Haha.

Venom: We are in total agreement. Deadly Outbreak and Perfect Weapon are coming up this week.

I quite like this movie, but it could have done with a few more fight scenes.

I think so, but the script got changed to a Jeff Speakman vechicle and i think he left the project.