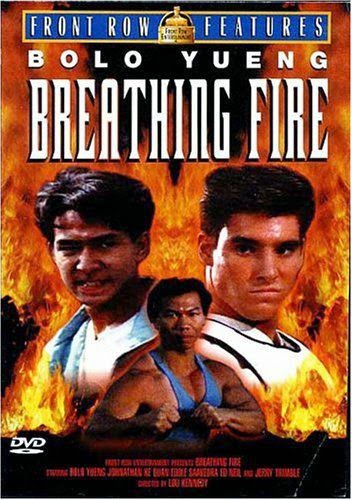 
Breathing Fire is the family saga of the Moore clan. Michael Moore (Trimble), who is the original Michael Moore and not to be confused with the noted unappealing and unpleasant blowhard who stole his name, masterminded a bank heist and stole plenty of gold bars.

He has one White son, Tony (Eddie Saavedra in unfortunately his only movie role) and one Vietnamese son that he brought back from ‘Nam when he was serving there, somewhat distastefully named Charlie (Ke Quan). Both sons are Martial Arts enthusiasts and compete in local tournaments.

When a young girl named Annie (Hamilton)’s parents are killed by Michael Moore, she goes on the run with Michael’s brother David (Neil), who also served in Vietnam. They end up at Michael Moore’s house, where David reluctantly trains them in his fighting style, and many baddies, including Thunder (Yeung) are fought against in the quest to unravel the truth about a highly-valuable piece of plastic pizza. You’re just going to have to watch to understand, which you should do today...

Usually when a movie is credited to three directors, that spells trouble. Just look at Slaughter High (1986). But in this case, it means silly fun for everyone. With its wacky and youth-oriented spirit, Breathing Fire wouldn’t be out of place in the canon of Ted Jan Roberts. Instead of Ted Jan, we get Mark-Paul Gosselaar lookalike Saavedra, who gives us his own personal vision of what a Zack Attack should be. The movie also strikes a blow for the Americans with Disabilities Act, because it features a boy with a speech impediment (Ke Quan) in a fight scene with multiple midgets (excuse me, “little people”), and doesn’t dwell on or exploit the fact. And any movie with a cross-dressing Bolo Yeung simply demands to be seen. 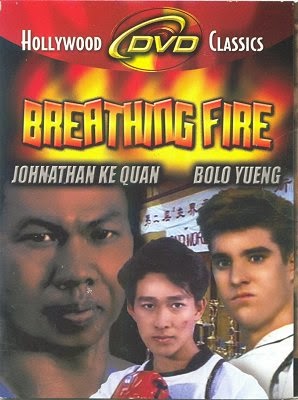 The movie is chock full of great line readings, fascinating T-shirts, training sequences (a lot of which could easily be mistaken for torture), Vietnam flashbacks, and much more. There’s a killer disco sequence, the token female baddie of the gang is of course here, and it all concludes in - you guessed it - an abandoned warehouse.

And let’s not forget the time honored “young person/people have to prove they’re worthy to the great master before he’ll work with them” subplot involving Ed Neil, not to be confused with Ed O’Neill (though both are Martial Arts masters - O’Neill is a practitioner of Brazilian Jiu-Jitsu. Why Al Bundy himself hasn’t been cast in any Breathing Fire-type movies remains an open question). Ed Neil should have done more as well. A team-up with Ed O’Neill as Karate-kicking cops would have been amazing. It’s never too late. 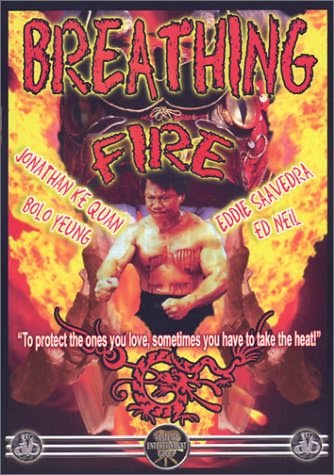 Despite, or perhaps because of, the three directors, there are plenty of humorously abrupt cuts, and other...what look like shortcuts, on display. It all adds to the entertainment value, and the fight scenes have that Hong Kong-style fast energy. While that style of fight scene is more than welcome, it almost seems out of place in this kinda-sorta-quasi-almost kids movie.

The whole “brothers in ‘Nam” idea was an interesting concept, and could have been developed into a movie in its own right. But in the end, Breathing Fire is a wacky good time, with both Bolo and Trimble at their absolute best. (Side note: watch out for the Code of Silence (1985) poster at Tank (Wendell C. Whitaker in unfortunately his only movie role)’s house. )

Breathing Fire has got the fights you want, the silliness you need, and the “totally 90’s” vibe you can’t get enough of. And the DVD is dirt cheap. What’s not to love?

Also check out write-ups from our buddies, 10k Bullets, DTVC, and Fist Of B-List !

I agree. This is a classic bait-and-switch movie. The sleeve says all Bolo, but in reality, the movie has a lo Bolo quota. On the plus side, the lack of Bolo is evened out by the movie supplying lots of crazy 90s fashion and action. One might even say we end up with a Bolo tie.

On a side note, I'm sure the real Michael Moore has been hunting pizza also. "Get that damn pizza!" How's that for life imitating art?

Thanks for the kind words. Seeing as you put so much effort, thought and love for the genre into your reviews, I try to write good comments.

We noticed and we thank you.