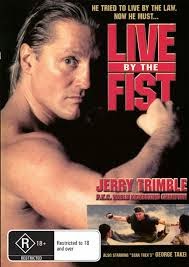 
John Merill (Trimble) is a former Navy SEAL who winds up in the Philippines while looking for work. Impeding his job search is the fact that he is framed for the murder of a young girl by a gang of thugs. Sent to Bolera Island, sort of the Alcatraz of the Philippines, things take a downturn for the mighty Merill. The prison is ruled under the iron fist of corrupt warden Acosta (Diaz), but did you think it would be any other way? Acosta’s days may be numbered, because a pushy human rights crusader, Helen Ferris (Albert) is investigating the place.

While Acosta cares not for human rights, Uncle (Takei) does, and he happens to be Merill’s cell mate. So Merill gets into various fights with various factions during his prison stay, and he must survive long enough to alert the world of his innocence. Will he die in prison, or LIVE BY THE FIST?

The presence of fan favorite Jerry Trimble is really the only noteworthy thing about the otherwise-mediocre Live By the Fist. It’s a typical Cirio movie, shot in the Philippines of course, and features every prison movie cliché there is. You’d think the fact that the movie is only 79 minutes would be enticing, but because it all feels like stuff you’ve seen a million times before, time actually goes by pretty slow here. And because it’s a Corman production, it’s all just a rehash of Bloodfist II (1990) and Bloodfist III (1992). Instead of Richard Roundtree, they got George Takei for the same part. Seems like a natural conclusion. 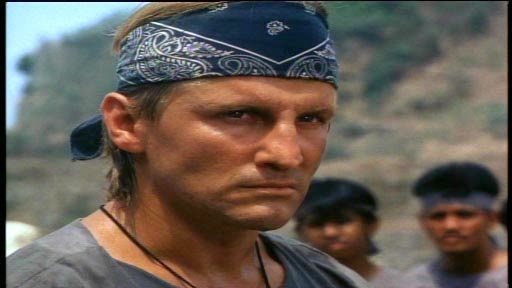 George “oh MY!” Takei (he doesn’t actually say his trademark line in this movie, but he does have some Oh My-esque moments) and Jerry Trimble truly are the ultimate cinematic team-up, Trimble of course resembling a more ripped cross between Sean Penn and Emilio Estevez. Vic Diaz, who has been in every Filipino movie ever made, is particularly hard to understand this time around, but Trimble makes up for it because he yells most of his lines. The “human rights chick” is basically a token character and does almost nothing.

Because it’s a prison slog with all the expected things that would entail, it’s hard to really get invested. It’s all very simplistic, and even a completely gratuitous exploding helicopter can’t save the day from the lackluster overall feel. But, as we said, Trimble is good, it’s not his fault. And the setups for the fight scenes are hilariously flimsy, which is a plus.

There’s the sax on the soundtrack, when there’s not a squealing electric guitar riff (we were hoping for an end credit that read “Guitar riff played by Jerry Trimble”. Sadly it did not come. We’re assuming it’s out of modesty, not a more logical reason.)

Lest we forget Philippine-shot movie regular Nick Nicholson (as “Greasemonkey”), Live By the Fist is the weakest Jerry Trimble movie we’ve seen to date. Featuring the song (which was also uncredited but we’re assuming it’s called) “You’ve Got To Fight” (which we’re also hoping was sung by Trimble), the movie is typical Corman Crud, saved from utter worthlessness by Jerry’s Trimblings.

Also check out a write-up by our buddy, DTVC!

This was an average Cirio movie. It seemed to have a lower budget than other Cirios, resulting in dull cinematography. I agree that this was the worst Trimble movie. Sadly, Trimble has yet to release any music, but according to IMDB, he did work as dog wrangler on The Last Sentinel. A dog whistle riff maybe...?

Funny stuff! We agree, this was dull and not up the usual Trimble par. We wish he was a rocker way too much. We are looking for ways to make the movie better.

This is the least of Trimble's films, One Man Army and Stranglehold are much more entertaining overall.