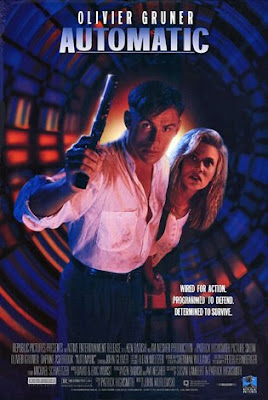 In a future where stylish Cardigan sweaters are the norm, so are human-defending robots. When the latest-model android, J269 (the perfectly-cast Gruner) stops an attempted rape of Robgen company employee Nora Rochester (Ashbrook), and accidentally kills one of the bosses in the process, the CEO, Goddard Marx (Glover) calls in a bunch of mercenaries to put an end to J269, such as Major West (Kober) and Epsilon Leader (Holden - they didn’t even give her a proper name, sadly). So now Nora and J269 have to fend off their attackers, all while INN (groan) news reporter Gloria Takamatsu (Gurwitch) reports on things. Will Nora grow to love J269? Will he live to be robotic another day?  Find out, or something...

Oh, The Terminator (1984) and Robocop (1987), what hath you wrought? If the makers of those movies could have predicted the slipstream of DTV crud left in their wake, would they have made them at all? Well, probably yes, but here we go with another run-through of a bunch of stuff we’ve seen before collated into a new package and now called Automatic. Of course, the melange wouldn’t be complete without a healthy dose of Die Hard (1988), and we also have a pinch of Blade Runner (1982), a dash of Universal Soldier (1992), and it’s reminiscent of competitors like Class of 1999 II (1994), American Cyborg: Steel Warrior (1993) and Fortress (1992), but Fortress is better. And Fortress (not to mention Robocop, of course) actually have Kurtwood Smith, rather than the Kurtwood Smith lookalike on display here. 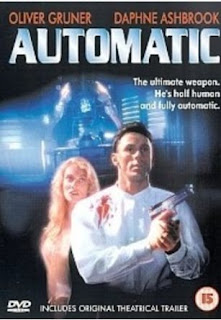 Let’s not kid ourselves here: this is a sci-fi slog. Yes, Olivier does some Gruner-Fu on the baddies, and that does help, and there’s some gun-shooting, but it all could have been so much better. Jeff Kober is wasted in what is a glorified sit-down role, and Marjean Holden is a far cry from the butt-kicking of Ballistic. Even Annabelle Gurwitch has nothing to do. The whole mercenaries versus robots thing could have worked, if only the filmmakers didn’t cling to tried and true cliches like a desperate man to a life raft. Go nuts! Break free! That’s what we were hoping for with Automatic. It doesn’t even have a Timebomb-era Michael Biehn to power things along. Instead, it all takes place in one building, for the most part, and they never turn any lights on.

That, perhaps, is the most infuriating thing about this and other movies of its ilk. It’s not hard to turn the lights on. This is the basics - it’s a movie. We’re supposed to SEE it. How are they not grasping this? Children’s movies and comedies are always well-lit. There’s no excuse. Maybe they’re trying to obfuscate its low budget, but that backfires because the whole no-lights thing screams “low budget”. Who cares if it’s low budget? Own it, don’t try to vainly hide it. And while the outing, as a whole, is overly talky, it’s good to see they predicted the rise of the Roomba by several years.

Automatic is typical 90’s product, which we’re usually in favor of, but there’s so much missed potential. Consequently, it holds a very loose grip on the audience, and surely was just another tape collecting dust on a video store shelf. And not entirely unjustifiably.

This is my favorite Gruner. Gruner is perfect for playing a robot, and I think the movie has good effects and an interesting plot. This type of futuristic Terminator/Robocop rip-offs were highly popular in Scandinavian video stores. Is this Gru-some Gruner month then?

Definitely have to disagree with you on this one, for me this film was a total fucking blast, it didn't feel like a "slog" at all and I had no problems at all seeing what was going on.

Roger: Gruner is the perfect robot actor. What else was popular in Scandinavian video stores? We are doing a two-week 4 film Gruner fest. Mercenary is the last one...for now.

Venom: Have to disagree. This was a tough sit most of the time. Biggest waste of Marjean Holden and Kober.

Like a few others have said, I have no problem with this movie. Not as good as NEMESIS (but slightly better than ANGEL TOWN) I think the movie would play as a great double bill with PROJECT SHADOWCHASER.

Thanks for asking, Ty! We had all the mainstream movies and most of the DTV stuff. The big difference was that many movies were cut, except for in Denmark. The censors were especially hard on martial arts, vigilante movies and slashers. Some movies were outright banned.

Lee: Never seen Angel Town or Nemesis. Always saw the Nemesis sequels at the video store in the 90s. Will have to check those out one day.

Roger: You're welcome! Love talking about video stores and what they had. The censors censored the best type of movies! Haha. We shouldn't have cut movies anywhere.

Nemesis is definitely one both Pyun's and Gruner's best films, Angel Town was OK-ish but not that memorable.

Interestingly I heard Denmark does sometimes get uncut versions of films that are censored elsewhere, like the case of the Mark Dacascos film "Sabotage", which had a particularly graphic shot of someone's head getting blown off censored in many countries.

Thankfully the U.S. has that bloody head shot in Sabotage. It's 2015, it's really time to end censorship on movies.