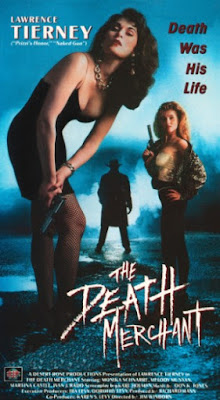 “History has shown us that death merchants have always attempted to close the “ultimate deal”. Let us hope that their evil endeavors continue to fail.” – Closing words of The Death Merchant

Ivan Yates (Tierney) is some sort of death merchant. What is a death merchant, you ask? Well, in the case of Yates, the answer appears to be an elderly and ailing black marketer who wants a special microchip so he can control the world’s nuclear arsenal. In addition to that, he wants a priceless urn containing the ashes of the ancient Egyptian Shohamen. Also he talks to his pet fish named Seymour.


When an archaeologist, Dr. Farraday (Rado), and his daughter Amanda (Schnarre, of Peacekeeper fame) get tangled in the web of Ivan Yates, only one man can help them out of their predicament: one David McKinley (Singleton), from the Cultural Affairs Department of the U.S. Government. Realizing he needs more power because he is somewhat of a nerd, McKinley turns to 1991-era coolguy Jason Cardwell (Viharo). So now McKinley, Cardwell, Farraday and Amanda have to come up against the conniving and duplicitous Death Merchant, who also has as backup baddie-esses Martina (Castle) and Natasha (Munyon). Who will come out victorious in the battle between the Death Merchant and the entire U.S. Navy?


James Winburn is known primarily as a stuntman, but he has directed three movies in his career: One is The Death Merchant, another is Evil Altar (1988) starring Robert Z’Dar, and the final movie in his trifecta is Miami Beach Cops (1992). While, taken together, that is impressive, if you must see one Winburn movie, see Miami Beach Cops. The Death Merchant appears to suffer from some technical problems, as the sound is horrendously shoddy, and the picture isn’t so hot either. The fact that the movie has audio issues is especially egregious because the movie stars the late, great Lawrence Tierney. Tierney’s inimitable voice CARRIES this movie. If it wasn’t for Tierney and his voice, this movie would be nothing. 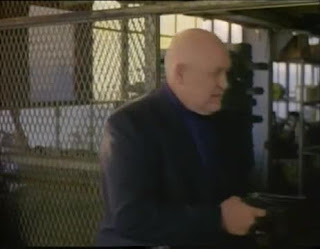 We were worried that, though the movie features Tierney, it would be a mere sit-down role. Thankfully, it’s not. Tierney gets a lot of great screen time, and in not all of it is he sitting. Winburn used the man to his full potential, as far as rock-bottom budget AIP movies shot towards the end of his life would allow. Tierney is truly “America’s Angry Grandpa” as he barks and growls his way through the muddy and muddled proceedings. This ‘Merchant must think it’s “Of Venice” because of all the highfalutin and pseudo-Shakespearean dialogue. It’s a clumsily written film, and the lines are delivered awkwardly by a cast of inexperienced actors (except Tierney and Rado, of course).


Our main “hero”, McKinley, is played by Andrew Singleton, and, oddly, this is his one and only movie role to date. He has a penchant for skinny ties and he has a curly mullet. So, obviously he’s the hero. Martina, on the other side of the Death Merchant/anti-Death Merchant divide, was last seen in Total Exposure (1991), released the same year as ‘Merchant. What a year it must have been for her.


There’s a car blow-up and some very weak gun-shooting, but despite its release on ACTION International Pictures, there’s not really any action here to speak of. Most of what we see is a lot of nonsensical “intrigue” that the limited means of the production didn’t really have the wherewithal to support. Perhaps that is best evidenced by the fact that the opening of the film is the exactly the same as the climax. Literally it’s the same footage we already saw. Granted, there’s some McKinley footage spliced in during the second go-around, but come on. In general, though, we give the filmmakers points for trying, and Tierney is fantastic, but The Death Merchant is a no-sale.