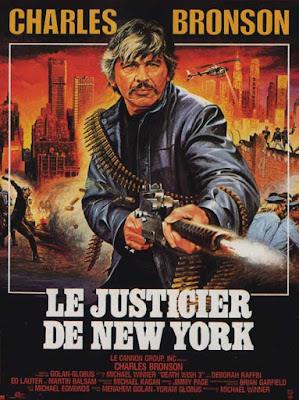 Paul Kersey (Bronson, of course) is back in action and back in New York City in this classic Cannon outing. When Kersey arrives, ostensibly to visit his old buddy, he immediately gets into a whole heap o’trouble, as you might expect. When a devious cop named Shriker (Lauter) unleashes Kersey into a crime-ridden East New York neighborhood, all he asks is that Kersey occasionally reports back to him, because he knows crime stats will drop dramatically.

But Kersey is more interested in helping the poor inhabitants of an apartment tower that’s plagued with the rampant crime in the neighborhood. He makes fast friends with Bennett (Balsam), and even finds time for romance with public defender Kathryn Davis (Raffin). But the main order of the day is to take down gang leader Fraker (O’Herlihy) and his rampaging underlings. Soon enough, Kersey wages his one-man war against the baddies and ne’er-do-wells of New York…who will survive the onslaught?


Did Judas Priest write the song “Delivering the Goods” about this movie? Well, probably not, as it’s from 1978, but they easily could have. Death Wish III is when the franchise went from being serious-minded and 70’s to being ridiculous, over the top, and 80’s. On the one hand, it lost some of its “serious points”. But on the other hand, it gained a lot in terms of the fun quotient. And this movie is a ton of fun. 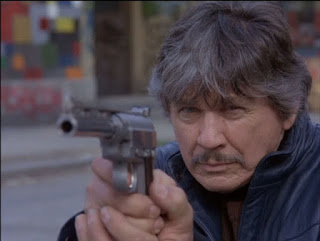 The 80’s was the golden age of movies where punks take over the streets. Tenement (1985), Exterminator 2 (1984), Enemy Territory (1987), and Chains (1989) just to name a few. It’s a joy to watch Bronson blow the baddies away with a wide variety of weaponry. And set all that to a stellar Jimmy Page soundtrack, and you have a classic winner all around (and that’s not a pun based on the director’s name).


Martin Balsam is the classic old salt and he and Bronson make a stellar pairing. When Balsam first appears on screen, you expect to see a credit like “And Martin Balsam as Charles Durning in The Hal Holbrook Story, featuring Burgess Meredith and Ernest Borgnine, and with a special appearance by George Kennedy”. Needless to say, it’s awesome to watch the triumph of the older gentlemen over the disrespectful young whippersnappers. 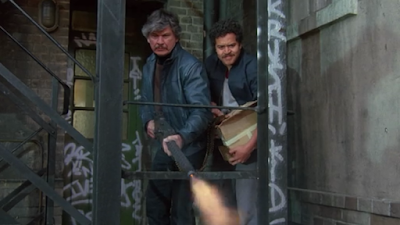 While wags may describe the movie as “stupid” or perhaps “mindless”, we say that anyone that levels those charges has no sense of fun and mirth. And if it is stupid, it’s the good stupid we’re always talking about. Honestly, ask yourself: is there anything better than Charles Bronson in the 80’s with a rocket launcher? After some deep soul searching, you will find the answer is no. Trust us, we’ve been there, man.

Don’t get us wrong, we love the first two Death Wish movies. But the bleak, dour tone is gone here. Death Wish III marks the moment when the gray, overcast clouds broke and the sunlight flooded in. Our credo: Charles Bronson now, Charles Bronson forever!

During the Dark Ages of film censorship in Finland, movies of ”bad quality” could be punished by the government with a tax of 30% on the ticket price instead of the usual 10%. It was an official five-star-review seal of disapproval, and the opposite of an action movie getting a PG-13 rating. Movies that earned this badge were e.g. Dirty Harry, Nighthawks, An Eye For An Eye (1981), Terminator, American Ninja, and yes, Death Wish II and 3. The last movie to get the award was Hard Target, seemingly in a move to condemn Van Damme’s entire career just before the extra tax was discontinued in 1995. Film censorship finally disappeared in 2000.

In my opinion, this was the best Bronson movie, with 1985 in general being the peak of the Cannon canon.

When it comes to pure action movie rudeness on an unmatched scale, Death Wish 3 is without peer. Some come close (Deadly Prey, Rambo 2), but I cannot fathom how it gets more ludicrous or better than this. I must have seen it about 200 times since 1986 and I’m still not tired of it. The sight of Bronson blowing away the scum with the huge machine gun has to be seen to be believed. Were they laughing as they made this? How could they not? Nothing beats this film. It truly is the epitome of the 80s action genre.

Roger: Those are some amazing facts about Finland censorship! It's insane to think that the government could increase prices bases on their personal taste. Thankfully it's been over for 20 years now. It is the best Bronson movie, but part 5 does have an exploding soccer ball. But part 3 all around is the best.

Force Field: It's impossible to get sick of DW3! It's just a pure action blast of fun from beginning to end.

You know, even though I just commented on this yesterday, I’ve been watching it tonight on Encore and I don’t think anyone could deny the final 20 minutes of DW3 are the greatest in film history. The non-stop, rampaging violence can’t accurately be put into words. Combined with the melodic guitar work of Page, it’s too much, an overload. How many people are killed in this battle? Who cleans up the bodies and total carnage? This would be one of the biggest news stories of all time. I don’t think any review or summary can do this film justice. In fact I find it incomprehensible films like this were once made.

I completely agree that the Finnish movie censorship was insane. Movies could also be banned due to violent content having negative effect on the viewer. Additionally, violent movies were banned on home video from 1988 to 1999. The banned movies included Cyborg, Fist Of Fury, Future Kick, The Man From Hong Kong, Rapid Fire (1992), Steele Justice and Way Of The Dragon. Other action movies were cut, e.g. the three first Dirty Harry movies, Stone Killer, all the Death Wish movies, The Gauntlet, Lionheart and Out For Justice. The last banned movie was Expect No Mercy in 1995; perhaps the floating Merhi head was too much...?

Force Field: We agree, no review or any write-up can really do it justice, we did our best, but we it has to be seen to be believed. Haha about being the biggest news story ever.

Roger: That's a fascinating list and an insight into drew the ire of the censors. Haha about the Merhi head, it scared us all. You can almost see why that was censored.