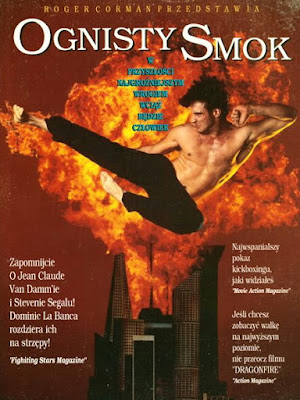 
Los Angeles in 2032 is, wouldn’t you just know it, a hellhole. A man travels from another planet (which is apparently a common occurrence in the future) to earth in order to find out who killed his brother. Laker Powers (LaBanca), whose name was obviously concocted by a huge basketball fan, has to compete in underground Punchfighting matches which somehow get him closer to finding his beloved brother’s murderer. Slick (Kisu) becomes his trainer and he works his way through all his opponents in tournament-style bouts. Will he get to the truth about his brother? Or will DRAGON FIRE set his dreams of glory ablaze?


Dragon Fire is a typical Corman-style Punchfighter that, instead of starring Jerry Trimble or Blake Bahner, features one Dominick LaBanca in the lead role. By now, even Don the Dragon was on to better things. In the good old video store days, someone could be plucked from obscurity to be the main star in a movie – see Jay Roberts, Jr., Matt Hannon or Kely McClung for just three examples. LaBanca looks like a cross between Scott Baio and Ken Wahl. He should have been on a 90’s sitcom like Blossom, but instead he’s punching, punching, and punching some more, as are his many opponents.

As in other Corman actioners, the stars have their fighting credits underneath their names during the opening credits. Strangely, LaBanca doesn’t have any specifics under his name, so how are we to know his pedigree and qualifications to appear in Dragon Fire? Nevertheless, the settings are “futurism on a budget” and comparable to the likes of Shredder Orpheus (1990) and Neon City (1991). It’s comforting to know that in the future, with all the many entertainment options available, grown men punching each other still remains extremely popular. As do mullets. They always say fashions come back around.

Kisu, not to be confused with Kimo or Beano, is the Van Peebles-esque trainer who quotes Sun Tzu without crediting him. Laker Powers is such a meathead that he doesn’t question why Slick is able to continually come up with all these nuggets of philosophy. But all of that pales in comparison to the constant fights. If it’s punching – and occasional kicking – you’re after, look no further.

One thing about Dragon Fire, it doesn’t skimp on the beatings-up. And the steady stream of opponents feature characters that are very Street Fighter II-esque, which makes sense for the time. At least they have unique, individual personalities, unlike some tournament movies. Even though dumbness is readily apparent, and it does get a bit boring despite the modest running time because of the repetition, it’s still better than big-budget versions of this type of material like The Quest (1996).

Sure, the acting is stodgy, but who cares? Most of the guys aren’t actors, they’re fighters. But what’s Pamela Pond’s excuse? Well, presumably it’s all part of the fun. Just like all the screaming, sweating, punching, kicking, and unabashed stupidity. Yet, we wouldn’t have it any other way.

So, for yet another Corman outing (which combines numerous strip club scenes which Corman also seemed to like around this time) and the unassailable charisma of a certain Dominick LaBanca, look no further than Dragon Fire.

This was one of Corman’s several remakes of Bloodfist, see also Angelfist, Full Contact and Bloodfist 2050. It’s a good, classic story, but this was the most mediocre version of all the filmizations. Still worth a watch, though.

Corman loves to recycle! Haha. Angelfist was a blast. We have a write-up of Bloodfist 2050 coming soon.