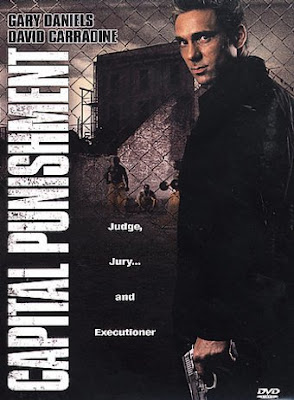 
Trust me, you never want to do "Kick". Evidently, Kick is the most addictive drug in Asia. It was originally given to meat farmers (pretty sure that's a thing) to make sure their cows and chickens grow faster and, presumably, meatier. Now Asia is hooked, and one man is poised to bring this scourge to the U.S. of A. His name is Nakata (Yamashita), and he is also a Martial Arts master and he's evil. So the DEA enlists a professional kickboxer to take down the Kick dealers (as you do). James Thayer (Daniels) sports a sweet ponytail and high-waisted jeans, which makes it easier for him to kick people. Which comes in handy when you're battling Kick dealers. See, it all comes together.

With his wife Anna (Fabian) in danger, his kickboxing opponent Lozano (Jacklin) angry, and a potential crimefighting partner named Holt (Lightfoot) trying to catch up, Thayer has yet another problem. It turns out (and this isn't a spoiler; we know this pretty much from the jump) that Nakata is Thayer's sensei and he taught him everything he knows. Isn't that always the way? Will Thayer finally KICK the habit? Find out today!

David Carradine is on the phone. And he wants to talk to you. That's right, Carradine is in Capital Punishment also, as a man named Michael Maltin. Well, "in" is such a relative term. He really does let his fingers do the walking. I haven't seen this much phone shilling since 1-800-COLLECT. 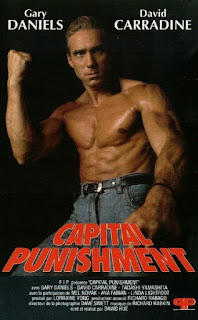 Anyway, when we first saw that Capital Punishment was directed by David Hue, we thought, "uh oh". After all, that's the guy behind Bloodfight 3 (AKA Karate Wars), which was pretty weak. Well, color us tickled pink, because 'Punishment was a total surprise. Yes, it's very low budget, of course, but it's hilariously funny and entertaining. It couldn't be more different from Karate Wars. It's a winner. Trust us. Ignore any hate you may have read towards this movie online. Anyone with a sense of humor will love it.

The plot is nonsensical, the dialogue is childish, the line deliveries are on par with a middle school play, the reaction shots are priceless, the grunting is plentiful, the incidental characters are colorful, and the fight scenes are gems. It's all very, very, VERY silly. You can't help but love it. There's something infectious about it. The time flies by while you're watching it and it's just so much fun.

The aforementioned fight scenes are almost non-stop. The great and mighty Gary Daniels is continually punching or kicking someone. It rarely lets up. Clearly a lot of time and attention went into these scenes, far more than any of the others. Some notable moments include when Daniels is fighting with two flashlights in a darkened room, and the whole scene in the ice factory. It was interesting to see a younger Gary Daniels kind of feeling his way through things. Obviously better things were to come for him, but this was a nice early role for one of our action idols. 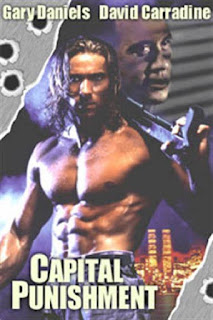 The whole thing starts in a sort of "Kickboxing Dinner Theatre" where Gary and some other dude - both of whom are wearing shorts that say "Kickboxing USA" on them - are battling it out in front of classy people who are sitting at dinner tables. Not long after that, we're informed that "nine out of ten" children in Asia have birth defects because their parents took Kick. Seems like a lot. Of course, there's a barfight, a warehouse fight, and a Final Rooftop Fight, but there's a fight pretty much everywhere. Further adding to the ridiculous fun, every time something blows up, it's from another movie. Then it ends and a great time was had by all.

We should also add that while the film's alternate title, Kickbox Terminator, is a cool one, it's not related at all to what we see in any way, shape or form. It's not like there's some sort of cybernetic guy in a ring with boxing gloves punching people. Of course, we would watch that if it's ever made.

In the end, we really loved Capital Punishment. You have to really have a heart of stone if you can't get any enjoyment out of it. Yes, visually it has that "junky" look to it but if you can get past that, a diamond in the rough will emerge. Oh, and next time your phone rings, just think...there's a really good chance it may be Michael Maltin.

Comeuppance Review by: Brett and Ty
Also check out write-ups from our buddies, The Video Vacuum and DTVC!
Posted by Ty at 27.5.21

The imagined movie you mention, with cybernetic kickoboxers duking it out in the ring, actually has been made: Heatseeker (1995), directed by Albert Pyun. It’s one of Pyun’s best, so do check it out. And surprise: Gary Daniels plays the evil ”kickbox terminator.”

Never seen Heatseeker, heard of it though. but will keep an eye out for it!