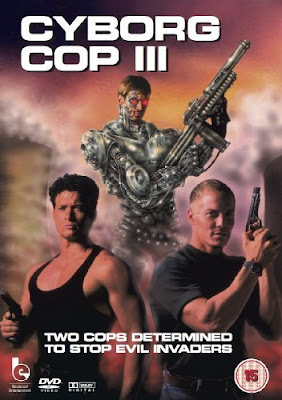 
Saint (Zags) and Max (Genesse) are Federal Marshals and also roommates (?) who get more than they bargain for when they cross paths with a newscaster named Evelyn Reed. While investigating a shady robotics company called Delta Tech, she takes a valuable microchip and the Delta boys want it back.

Fortunately for them, they're in the business of creating unkillable killbots that kill. So Saint, Max, and Evelyn go on the run, and meanwhile there is a lot of shooting and blowing-up of things as our trio of heroes fight the evil cyborgs. Or androids. Or whatever they are. It all comes to a head in a junkyard where man and machine meet in the ultimate test...and that's just Frank Zagarino! We kid, but...who will be feeling the TERMINAL IMPACT?

You might be surprised at how enjoyable Terminal Impact actually is. I know we were. That's because this film seems to get a lot of negativity online, and the first 35 minutes really aren't all that great. But once you get past that rocky first third, things change for the better - fast.
Miraculously, there's an almost complete turnaround from stupid and dumb to wonderfully stupid and dumb. We love to see that, as it almost never happens. We give the filmmakers a lot of credit for righting the ship like that.

At said 35-minute mark, this is what heralds the sea change: a shirtless Frank Zagarino is cooking in his kitchen while atonally and tunelessly crooning along to the radio while using an upside-down baseball bat as a microphone. It's unquestionably the movie's highlight. 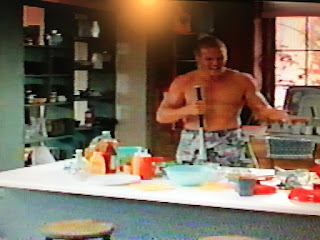 In addition to that, we get a career-best (at least from what we've seen) performance from Genesse. He's got energy and sass, and, of course, a leather vest. The two guys have good chemistry together. Miller, as the third part of their trifecta, is nice to look at but her line deliveries are somewhere between Leo Fong and Don "The Dragon" Wilson in the "it sounds like I'm not just reading - but flatly reading - my dialogue" department. But it's all in good fun.
It's a buddy action/comedy with some light sci-fi elements. It's almost a bizarre cross between Robowar (1988) and Drive (1997), but is nowhere near the class of those two. I wonder where the screenwriters got the idea for a human-like super-robot that's searching for a woman? We haven't seen anything that blatant since Termination Man (1998).

Like the movie itself, the score is not very good until it reaches a certain point - in this case, the car chase. Overall, the blow-ups are of good quality and the stuntwork is especially notable, highlighted best during a showstopper during the parking lot battle. You'll know what we mean when you see it. 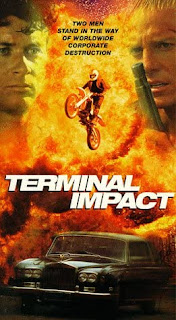 While it takes place in Iowa, but was shot in South Africa (as many Nu Image movies were at that time), we couldn't help but notice that the headquarters of Delta Tech in the film was at Fairfield University - which is the name of a real college in Connecticut. We know, it gets a little confusing, but other things to note are the healing powers of the robots are pretty cool and the main baddie has a great voice and he looks like Anthony Michael Hall. That, and Zagarino's singing voice, of course.

We can only surmise that anything negative said about the film is based on its first third, which is, admittedly, not great. Sure, it's not the most intelligent movie in the world overall, but you don't go to a Frank Zagarino-Brian Genesse film made by Nu Image if you're looking for cutting intelligence.

If you can get past the rather uninspiring beginning, you will get into the spirit of Terminal Impact.

IMPORTANT ADDENDUM: While one of the alternate titles is Cyborg Cop III, there are no cyborg cops in the film.

Comeuppance Review by: Brett and Ty
Also check out write-ups from our buddies, DTVC and Cool Target!

The best of the Cyborg Cop trilogy. Since Neill Blomkamp didn’t get to make the new Robocop, perhaps he could reboot Cyborg Cop?

The thing about Cyborg Cop Triple is that it features no fanny packs. It's pretty good otherwise, but let me tell you, the first 15 minutes of Cyborg Cop 2 put the entire rest of the series to shame. Seek it out to experience increased testosterone and feel like you're 20 again. You may wish to turn it off after those 15 minutes though, choice is yours.

Anonymous: Yes, there's no fanny packs, but no movie is perfect. Haha