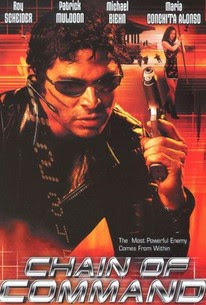 Special Agent Michael Connelly (Muldoon) is not the guy who writes the Bosch series of novels. He's a Secret Service agent tasked with protecting President Jack Cahill (Scheider). But the upright Connelly doesn't approve of Cahill's Clintonesque philandering, so he's transferred to a squad that helps protect the Nuclear Football.
His boss, Thornton (Biehn) explains that said football is not actually a football. It's a briefcase. This is starting to get a little confusing. Especially for Connelly, who is a dedicated public servant but not the brightest tool in the shed. When evil Taiwanese businessmen start killing everyone and then kidnap "The Prez" so they can take control of the football and aim it towards China, it's up to Connelly, and, by extension, Vice President Gloria Valdez (Alonso) to save the day. Will it be Connelly or the baddies who spike the football in the end zone? And who will run that up the CHAIN OF COMMAND?

It's Die Hard on a Taiwanese boat! At least that's a relatively novel place to have a "DieHardInA" movie, and not the usual building, hockey arena, or missile silo (although silos are repeatedly mentioned. Thankfully not as many times as in Terminal Countdown). It must be said that Chain of Command - not to be confused with the Dudikoff film of the same name - may seem a little familiar to anyone who has seen The Peacekeeper (1997) or Executive Target (1997).
Chain of Command is a sort of mash-up of the two; it has all the briefcase action of The Peacekeeper (along with Roy Scheider), mixed with the presidential kidnapping of Executive Target (along with Roy Scheider). It seems Scheider never tired of working on all of these variations of the same theme. Hey, the guy liked to work, and we respect that. 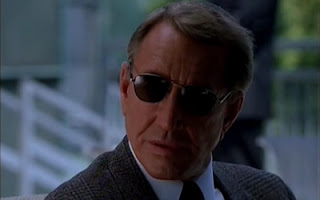 The problem is that the film gets off to a slow start, and it's a long time until we as viewers see any action. It seems director Terlesky was concentrating on the political drama of the situation, although, let's face it, this isn't All the President's Men (1976). A little more self-awareness and consideration for the viewership of DTV action movies would have gone a long way.
Compounding that is a lack of competent lighting, one of our least favorite low-budget pitfalls. You've got to have lights, people. Underlighting is the scourge of filmmaking. Whether you're Chain of Command or Boardwalk Empire, you have to at least make a cursory attempt to turn on a few lights. It won't kill you.

During all this yak-yak, somehow they couldn't find time for any meaningful character development. Michael Biehn (who is almost unrecognizable here) does describe the nuclear football as "armageddon in a box" - which is convenient and saves time - and President Jack Cahill does use a rowing machine, predating House of Cards' Frank Underwood by a good many years.

We had to wait until almost an hour in until we got to Maria Conchita Alonso, who was interestingly cast as the Vice President. Will we ever see the day when a Latina with a thick-ish accent is the VP? Nevertheless, we like Alonso and it was nice to see her in that sort of role.
A better movie would have been Muldoon and Alonso as partners who beat up goons and bust heads together and shoot drug dealers or something like that. That would have been awesome. Instead we get what we get, which is just mediocre. But what else do you expect from a DTV movie from 2000? It wasn't the best year for DTV films. 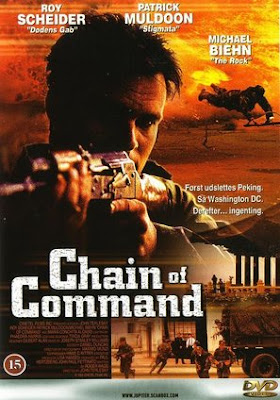 During one of the many discussions of the nukes and launch codes and such, more than one reference is made to something which sounds like "Merv Warheads". The DVD has no captions, so we don't know for sure. But that doesn't sound very threatening. Unless that's what the upper-management brass on ABC back in the 70's called their programming lineup designed by Merv Griffin. Then it makes more sense.


In the end, Chain of Command is your typical year-2000 DTV fare. It's not great, and it's not offensively awful. It's just a movie on a screen. It offers no surprises or curveballs of any kind. It could have been much better, which is a shame, especially considering its better-than-average cast, but ultimately this is what you might call video store shelf filler.
Comeuppance Review by: Ty and Brett
Posted by Ty at 24.6.21

I was surprised by how dark this film got and the film did surprise me as I genuinely didn't see some of the plot twists in the second half coming.

Happy you enjoyed the movie!