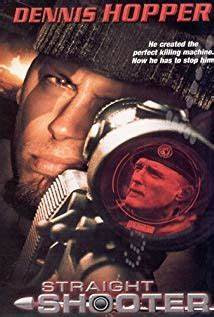 There's a sniper with a high-tech rifle who is picking off the citizens of Germany one by one. Why is he doing it? Frank Hector (Hopper) is flown in from England to find out. The shooter is code-named, reasonably enough, Straight Shooter (Ferch), and Hector is working with the German authorities to track him down and stop him. Hector was his commanding officer in the French Foreign Legion, and he trained him to be a ruthless killing machine. Only Hector knows how Shooter thinks, and while Hector now runs sleazy brothels and nightclubs, the Germans don't care because the race is on to stop Shooter from shooting. At all costs. What secrets from the past will be revealed? Will we learn the true motives of the...STRAIGHT SHOOTER?

Imagine if Sniper (1993) was about a bad guy, cross that with if there was ever a Trautman spinoff movie told from his perspective of the incidents in First Blood (1982), and that mixture was a low-budget film made in Germany with Dennis Hopper, you'd have Straight Shooter. 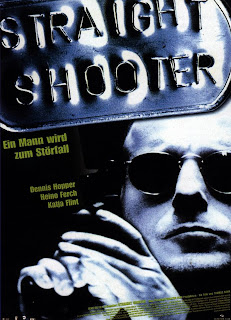 While the intro to the film in the first minute makes it seem like what we're about to see will be that mixture of stupid and silly that we're all used to, it turns out that the tone of the film is actually quite serious, and even dour at times. However, there is some unintentional humor whenever anyone refers to the sniper, whose real name is Volker Bretz in the film, as just "Shooter". This leads to lots of lines such as "Shooter has made contact" and a classic from Hopper, "Shooter is not my friend!" They do this a lot throughout the course of the movie, almost to Brakus-levels. The only way it could've been better is if the shooter's real name was Phil Shooter. Or Larry Shooterman. Or something like that.

Straight Shooter overall concentrates on the more serious-minded aspects of the drama and it probably didn't see itself as a slam-bang actioner loaded to the gills with thrills. If you go in expecting that, you most likely will be disappointed, although there are some cool blow-ups (especially the missile launched at the police car), and some other action-esque scenes. But if you see it for what it is, and not what you think it should be, it's worth a watch.

Why director Bohn went with some computer-generated morphing effects for some scenes, and why he did a CGI explosive device flying through the air, we don't really know. They're a bit out of place with everything else. As you might expect, fan favorite Dennis Hopper more or less carries the film on his shoulders, and his charisma helps things immensely. That being said, Heino Ferch had his moments as Shooter. He's no Gotz Otto, but who can be?


Straight Shooter is a worthwhile movie, but for the most part it lacks much-needed energy. Certainly a little more pep would've helped (and the plot is something that you might see on an episode of Criminal Minds or some such show) but it's not bad at all and we say check it out if you find it somewhere cheap.
Comeuppance Review by: Brett and Ty
Posted by Ty at 14.7.21

Im so intrigued by this film, despite getting a low rating here and middling reviews elsewhere, Iv ordered the Japanese DVD of it .. I like Sniper films.

Then you'll love straight shooter! It's not like the Sniper series, but as long as you don't go in expecting it to be, then you'll enjoy it.