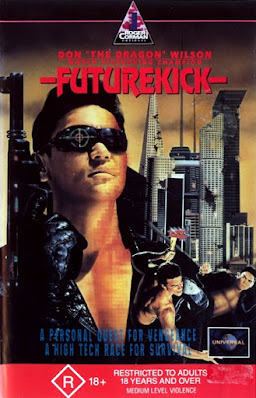 A lot is going on in New Los Angeles in 2025. These things called Cyberons were invented, for one thing. They're androids with both human and robot characteristics. For whatever reason, the companies that created them sought out to destroy them all, but there's one left, a kickboxing Cyberon named Walker (Don). Because it's the future, you see, VR is huge so a VR developer named Howard (Pomerantz) leaves his home on the moon to travel to earth to sell his wares. While there, he runs afoul of a baddie named Hynes (Lottimer). Apparently Hynes works for a place that sells black market organs. He has a special tool that plucks the organs out of living victims. Hynes then answers to his boss Kraner (Ruscio).

After not hearing from her husband for a while, Howard's wife Nancy (Foster) follows him to earth. She consults with a tarot card reader named Tye (Dona), but after witnessing Hynes doing his evil business, she is forced to go on the run. She then teams up with Walker, as they are the two most harassed people in New Los Angeles. Also Hynes is looking for "the disc". Then Walker has a Final Factory Fight with Bang (Penn).

Oh, and the latest, hottest game in New L.A. is something called Laserblade, the rules of which are so unclear and incomprehensible (remember those words) that it seems like it was developed by Mitchell and Webb after they finished with Numberwang. Of course, the loser of Laserblade dies horribly from some sort of flash of light. Does any of what you just read have any kind of flow, continuity or coherence? Does it just seem like a bunch of random ingredients thrown together? Apparently the filmmakers didn't notice or care, but that's FUTURE KICK for ya!

For a film with so many elements, there's a lot missing from Future Kick. Namely, relatable, sympathetic, or interesting characters or situations the audience can care about. There's no human element. It's just a jumble. In many cases, movies with a tangled web of ideas without a lot of coherence can be a lot of fun and enjoyable to watch. But there's something almost depressing about Future Kick. Maybe it's the lack of lighting or the fact that most scenes look like they were shot in studio-created alleyways. 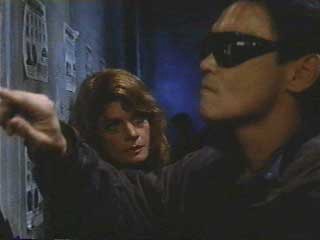 We realize they did that to cover up for the lack of budget, but the problem with that is that it's a dead giveaway for a...lack of budget. As viewers, we don't care about what the budget is. Just give us something we can sink our teeth into. But the whole dark alleyway thing becomes bleak very quickly and it all feels quite dingy.
We realize this was Corman's version of Blade Runner (1982) crossed with The Terminator (1984). But really it's the same old formula he used for Dragon Fire (1993), Bloodfist 2050 (2005) and others. Just throw in some "futuristic" sets (just turn off the lights in any room in your house and it's about as futuristic as Future Kick), then garnish with a few strippers and there you have it.

Fan favorite Don "The Dragon" Wilson is perfectly cast as a robot, however. It gives his - as we call them - 'wonderfully wooden' line readings a reason to exist. While we were more than happy to see a kickboxing fight between The Dragon and Chris Penn, it really came out of nowhere. Forget character development, there's no fight development! But where else will you see a fight like that? Only in Future Kick, we suppose.

For the Laserblade matches - which are sort of like mental arm wrestling matches where the loser is killed by a deadly camera flash - the audience is clutching some futuristic form of cash and is yelling. It's not exactly Punchfighting, but it's close. Sort of. Laserblade would be a cool name for a movie in its own right, but apparently it was decided the idea wasn't strong enough to support a full movie on its own. We won't tell David Cronenberg that it's Scanners (1981) meets the arm wrestling scene from The Fly (1986).

Future Kick was the one and only directorial or writing credit for a mysterious man named Damian Klaus. If that is his real name. Clearly he felt he said everything he needed to say and that he completed his mission as a filmmaker. I know I would if I had created Laserblade.
But it must be said that one of the reasons that Future Kick feels like it's missing something is the fact that the running time is just over 69 minutes before the end credits. Maybe the secret keys that tie everything together are on the cutting room floor. But why would that be? Maybe one day there will be a "Director's Cut" of Future Kick that restores everything. Except our sanity and the minutes back into our lives.


But, as it stands, the 69-minute running time is one of the best things about Future Kick. There's nothing for viewers to latch on to, but you don't have to suffer very long. Future Kick remains one of the lesser Don The Dragon movies.
Comeuppance Review by: Brett and Ty
Posted by Ty at 17.9.21