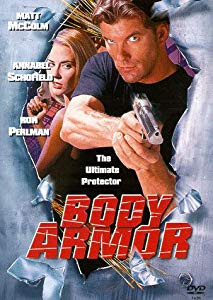 Ken Conway (McColm) is The Best. What is he the best at, you ask? Apparently, Conway is a highly-trained professional toughguy, a sort of likable soldier of fortune, and if you have the money, you can hire him to protect you, beat people up, shoot them, or whatever you may want. Tiring of his latest assignment, protecting a bad guy named Rasheed (Rhys-Davies), Conway decides to do something more positive with his life and his skills. His accountant/sidekick 'Hutch' Hutcherson (Howard) wants him to help guard a Red Cross convoy in Sri Lanka, but Conway demurs, saying he "doesn't know what diseases he'll get". Conway doesn't realize how prescient his words are, as he then quickly goes on the case of a missing scientist, which leads to a sinister virologist named Ramsey Krago (Perlman).

Ostensibly, Krago and his partner Sloane Matthews (Brittany) are looking into the cure for a deadly, Ebola-like new disease inexplicably named Ferris. But something evil is going on, and Conway is going to find out what it is. But time is of the essence, because Conway becomes infected with Ferris and only has 48 hours to live. Joined on his mission by old flame Marisa (Schofield) and Agent Monica McBride (Alt), CONWAY is going to have to act quickly or the evil Krago will get away. Can he do it?

Body Armor is comic-booky good fun. It features exaggerated, larger-than-life heroes and villains, and the women that accompany them. If you're looking for something realistic and gritty, this isn't it. Similar to what The Adventures of Buckaroo Banzai Across the 8th Dimension (1984) is to the Sci-Fi genre, Body Armor is comparable to that in the realm of low-budget action. It's all done with a rather silly sense of humor. Clint Howard is the comic relief character, but a vein of humor goes throughout the whole film, including during some of the fight scenes. Of course, Howard and McColm are the Original Odd Couple. One of them looks a lot like Ben Affleck, and the other...doesn't.

The director, Jack Gill, has mainly worked in the field of stunts for his whole career, and Body Armor is nothing if not a stunt-fest. That would make sense, as it's Gill's only directorial credit to date. He pulls out the stops in that department, as you would think he would, as it's what he knows best. Besides the high-quality stunt work, Body Armor also has a noteworthy cast. 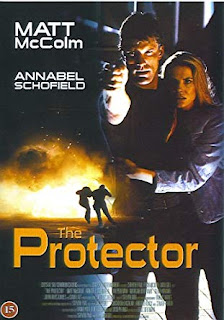 Besides the aforementioned Howard and McColm, we also have Carol Alt, star of one of our favorites, Crackerjack 2 AKA Hostage Train (1997). With Body Armor, you really get the Alt you want. As much as we love it, in Crackerjack 2 she's a hostage of the baddies. Here, she gets in on the action and continually shoots people throughout the film. Finally, Carol Alt shooting people! It's what we've always wanted to see. Annabel Schofield and Shauna O'Brien provide even more backup in the beautiful woman department. John Rhys-Davies and Michael Paul Chan provide small but memorable supporting roles, and Ron Perlman and Morgan Brittany are an amusing team of baddies. As good as Perlman was in the role, it's also the type of thing Ron Silver excelled at during that time period.

As an antagonist named Krago - which is sort of hard to take seriously because other characters pronounce it like 'Eggo', but then again that was probably on purpose because of the goofy tone of the film - he has virologist goons. That's right, virologist goons. Even though, to the public at least, he is a venerable, white-coated doctor, when Conway starts going after him, he sends his goons to beat/kill him. You don't see that every day. 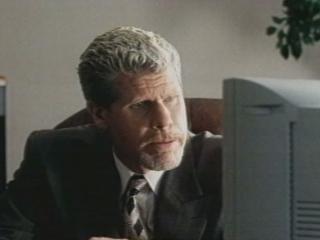 Naturally, lots and lots of stunt people worked on the film, notably Kane Hodder and a guy named Mike Justus. Could he have been the inspiration behind the man of the same name from Street Corner Justice (1996)? We may never know, but it is comforting to know that there is a real guy out there named Mike Justus.

Before its final release on A-Pix VHS as Body Armor, the film was known variously as The Protector, Krago's Island, and simply Conway. We can see why they went with Body Armor, as there are a lot of other movies called The Protector, and you really don't want to mess with Ed Marinaro. Krago's Island was bound to be confused with The Secret of King Mahi's Island (1988) and/or McCinsey's Island (1998) - plus that's not a very accurate title to begin with. Conway is a bit plain and doesn't exactly scream "stunt-filled action!", so ultimately they went with the best choice.

While the tone is a bit goofball, and the pacing could perhaps have been a bit more ironed-out, the action, stunts, and lovable B-Movie cast raise Body Armor above many of its competitors.

Thanks, Buddybaba! It is, it's silly fun and you got to love it.