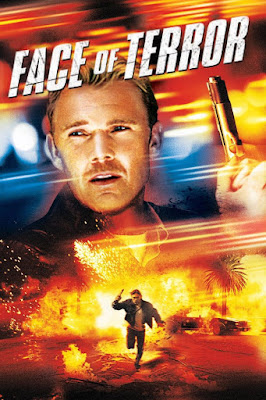 Nick Harper (Schroder) and his partner Jefferson (Hardison) are tough cops who are attempting to clean up the streets from drug dealers and hoodlums. However, Nick must take a break from doing that because he cottons on to the fact that his sister Faith (Stevens) has gone missing. She was last seen working as a model in Barcelona, so Nick flies there to get answers. As he's turning Barcelona upside down trying to find his sister, he stumbles on to a terrorist plot. There have been numerous bombings in Spain of late because a terrorist cell including the evil Saleem Haddad (Balfour). Teaming up with Ana Palacios (Galvez), they now must simultaneously keep the local cops off their back, find Faith, and stop the next bombing! Can they do it? Or will the beautiful face of Barcelona become the ugly FACE OF TERROR?

We all wanted it, and now we got it: Ricky Schroder as an action star! Sorry, Rick Schroder. Indeed, this is a performance worthy of a Rick and not a Ricky, because he has a mustache, his voice is gruffer than usual, he bosses people around, and he beats up and shoots baddies as well. It's the Rick Schroder we've all been waiting years to see! Regardless of his past, Schroder has screen presence and it's enjoyable to watch him. He should have done more tough-guy roles like this. But we are thankful he did this one.

Much like how TIG went to Poland in Beyond Forgiveness (1994), Schroder goes to Spain here with Face of Terror. It all plays out like a much more sane version of Gunblast Vodka (2000) - a cop goes to a foreign European city and more or less has to infiltrate the world of modeling. Of course, Gotz Otto is nowhere in sight but that's okay because we've got Rick. I know we make this comparison a lot, but in this case it is really apt - Face of Terror has a similar plot to Taken (2008), and of course it predated Taken by four years. DTV movies are always ahead of the curve. We say that often as well. 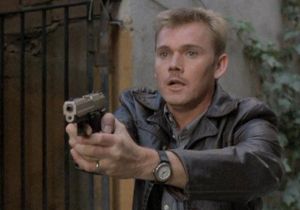 Kadeem Hardison's role was mostly on the phone and fairly thankless. Rachael Stevens as the missing sister was only in two other movies and is something of a mystery. All the other cast members acquit themselves well, and the Spanish locations are picturesque. The whole thing is shot clearly, bright, and well. You never miss a chase or Ricky Schroder beating up Eurotrash photographers.

In the early 00's, director Bryan Goeres was on a roll. Starting with the underrated and hugely enjoyable Phase IV (2002), he then made Face of Terror and Art Heist in the same year (2004), then did Crusader (2005). This time around, he wisely chose unorthodox actors for the roles - Rick Schroder as a fish-out-of-water cop in Spain and Eric Balfour as an Islamic terrorist - and he kept the pace snappy. Consequently, Face of Terror has a lot of positives and a lot to recommend it.

So, if you want to see Ricky Schroder punching and shooting people - as we know you do - please check out Face of Terror.

Bryan Goers has a pretty good track record, he also did "The Deal" with Penelope Ann Miller which was pretty good.

Phase IV is an underrated gem for sure!