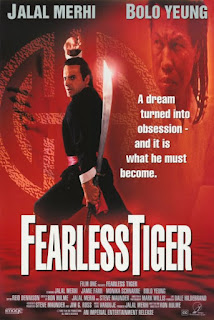 Lyle Camille (Merhi) seems to have it all in life: he's engaged to the beautiful Ashley (Schnarre), and is poised to take an important position in the family business, which is led by his father Sam (Farr). His charmed life is about to be derailed when his brother overdoses on a new drug called Nirvana, which clearly was the only thing with that name to become popular in 1991. (The drug also seems to have a code name on the streets: Fish Food).


Naturally, as any good brother would do after such a tragedy, Lyle flies to Hong Kong, studies with Martial Arts Master Do Man (Yip), meets the mysterious Master on Mountain (Bolo), and enters a King of the Kickboxers-esque fighting tournament. Lyle then returns to his native Canada after an undisclosed amount of time, and proceeds to use his newfound skills to get revenge on the baddies, and his main target is the dastardly Saalamar (Rockwood, not to be confused with the Jody Watley and Soul Train-affiliated singing group with a similar name). Will Lyle Camille reach his newfound lifelong goal of becoming a FEARLESS TIGER?


Fearless Tiger is probably one of the better Jalal Merhi movies we've seen to date, because it's full of enough silly and amusing moments to keep the whole thing afloat. Some scenes are genuinely well-shot and lit, and there's usually a fight or an explosion coming soon. 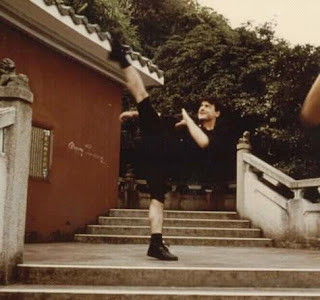 Because Merhi's real accent is so thick, Jamie Farr probably thought he needed to keep up with that, so his accent seems to get thicker as time goes on. The rise of Lyle Camille (how do they come up with these names?) was a bit like if Latka from Taxi trained hard to beat people up. What they should have done back in '91 - though it's not too late still today - is have Jalal Merhi and Bronson Pinchot play twin brothers who team up to get revenge on a drug cartel. Perhaps the cartel could operate out of the island of Mypos and their last name could be Bartokomous. It's too good of an idea. We'll keep waiting.

Anyway, Bloodsport (1988) and Kickboxer (1989) were very popular at the time, so here comes Fearless Tiger. What those classics don't have, however, is the hero fighting an overweight man wearing rainbow suspenders while on the back of a moving dumptruck. Lazar Rockwood, who plays the main baddie, looks like an Asian Billy Drago. We were happy to see Monika Schnarre here, in her first cinematic role. She later went on to be in The Death Merchant (1991). Like a lot of similar outings, a lot of time is taken up by the baddies looking for "the disk". It's a classic cliche we all know and love.


Co-writer J. Stephen Maunder went on to direct Tiger Claws II (1996) and Tiger Claws III (2000), as well as Shadows in Paradise (2010). He also wrote a lot of other titles we're all familiar with, such as Expect No Mercy (1995). With Fearless Tiger, we have something with enough absurd or entertaining moments to keep it all moving forward.


Featuring a quality end credits song, Face of Fear by Britton, Fearless Tiger is indeed recommended if you like those early-90's video store actioners, and we all can't get enough of those.
Comeuppance Review by Brett and Ty
Also check out a write-up from our buddy, DTVC!
Posted by Ty at 27.10.22