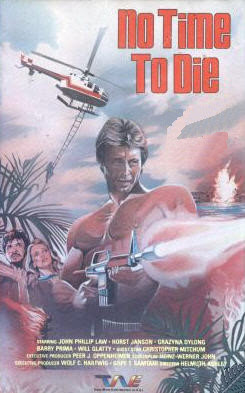 MIC (or "Multi-Industrial Corporation") has developed a super-laser. It must be transported to a mine to cut through the rock to save the trapped miners within. The best man for this dangerous job is one Ted Barner (Law). Of course, he is a motorbike-riding rogue who always has a snappy retort at the ready. It usually involves calling someone a "turkey". He takes his friend Ratno Lesmana (Prima) and also Martin Forster (Janson) along through the treacherous jungles of Jakarta with the giant laser on a flatbed truck. As if this wasn't enough of a challenge, a competitor to MIC, Protex, headed by the diabolical Mr. Gull (Mitchum) has hired Jan Von Clef (Glatzeder) to go after our heroes with all his goons and steal the laser. Von Clef wants to get revenge on Barner for a perceived betrayal in the past. Add to that the presence of Judy Staufer (Dylong), a reporter for "World News Agency" and romantic rival with Barner, and we have a chase through the jungle in a race against time. Will Barner and his crew make it and save the miners, or will Gull and Van Clef prevail?

Not to be confused with A Time To Die (1991), try to imagine some sort of cross between Fugitive Champion (1997) and Shaker Run (1985), and add JPL (John Phillip Law), and you may get some sort of idea of what's going on here. There's a lot of talking and minimal action. There's a lot of corporate intrigue over this laser, which we have to wait for the entire movie to see, and when we finally do, it's pretty lame. For a good laser movie, please see Light Blast (1985). Heck, even Night of the Kickfighters (1988) had more laser action than this half-baked dud.

99% of the movie is a talky setup for this laser, and it doesn't pay off. What could? On the plus side, we have a barfight with absolutely no setup, funny dubbing, scenic Jakarta locations, and a pretty cool score. And it ends on a freeze frame. Towards the end, there are a lot of wacky sound effects and Benny Hill-style fast motion. That would be fine if this was supposed to be a comedy, but we were promised a laser, not hijinks and antics.

Law is fairly charismatic, but both Mitchum and Prima are underused, and this "JPL: Dangerous Roads" should have been named "No Time To Waste".

Released by TransWorld, No Time To Die is a misfire.

What a shame that a movie with a cover like that doesn't pay off.

Like you said, there's not too many laser movies out there (didn't Brandon Lee make one?) Although i have got LIGHTBLAST on VHS (love those melting faces)

Sutekh: I know! What a disappointment! We wished it was better. Good B-movie cast and plot, awful execution.

Lee: Never heard of Angel Eyes (except the somewhat bad Jennifer Lopez movie) I will have to look that up. That's weird you mention Light Blast. That is our next review!

BTW, is LIGHTBLAST available on DVD?

Light Blast is on dvd. It really is an awesome flick!