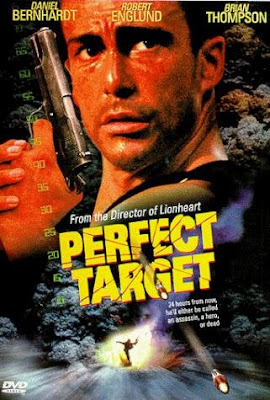 David Benson (Bernhardt) is a former CIA official who is down in the small, sleepy South American town of Santa Brava. All he wants to do is sit and drink his beer and enjoy a good cockfight, but oh no. He is recruited by Maj. Oxnard (Thompson) and Col. Shakwell (Englund) as part of a ragtag team of mercenaries to help protect an idealistic politician, President Casillas (Martinez) from potential assassins as he gives an address in the town square. Naturally, Casillas is shot - and Benson and his associate Ramirez (Pirri) are blamed. Now on the run, they end up in the jungle. They end up training a team of rebels to help overthrow the corrupt government, led by Casillas’ wife, Isabella (Rosen). Will Benson get out of this mess alive?

What’s so funny about this movie is how much Bernhardt resembles and sounds like Van Damme. Perfect Target was directed by Sheldon Lettich, the director of Lionheart (1990) and Double Impact (1991). Supposedly Bernhardt was discovered by the same guy that discovered Van Damme, and Bernhardt appeared in some of the Bloodsport sequels. For all intents and purposes, he IS Van Damme...yet he’s not. Every few minutes while watching this movie, you have to ask yourself, “is that Van Damme?” But, even though some wags might say Bernhardt is a low-rent JCVD, Perfect Target is actually a better movie than some Van Damme vehicles.

Bernhardt, from such movies as The Cutter (2005) and Strike Force (2003) (and even the Mystery Science Theater 3000-mocked Future War), appears more like JCVD here than ever before. Everything from his hair to his voice will remind you of the man. The role of David Benson also could have gone to Mark Dacascos or Olivier Gruner.

Interestingly, David Benson  smokes and drinks. This would never happen today. It’s pretty surprising this movie came out in 1997, it seems like it could have come out in ‘88 or earlier. It has that kind of feel. Brian Thompson, last seen as the baddie from Cobra (1986), enhances that fact. He is solid as the baddie here, as is Robert Englund, who gets to sneer away to his hearts’ content. He was probably relieved to not be doing a pigeonholed horror role. Plus, since their names are the mildly silly Oxnard and Shakwell, you can say, “Oh no! Oxnard and Shakwell are coming after you!”  The only one missing from the potential trifecta is Patrick Kilpatrick. 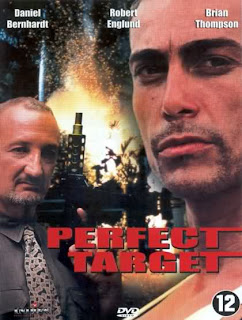 There’s plenty of shooting and hand-to-hand combat, and even one fight that recalls Operation Warzone (1988) of all things. The classic barfight is also here, and Benson is, of course, “the best” at what he does. But it seems an attempt was made to put in some decent dialogue and put in some plot twists. But it just may be too little too late.

This is the type of movie you feel you’ve seen before even if you haven’t. The whole “South American-corrupt government-rebels” formula has been seen in everything from Cocaine Wars (1985) to One Man Out (1989) to The Expendables (2010). The movie, shot in various parts of Mexico, has an appropriately hot and sweaty atmosphere, which is conveyed well.

Perfect Target, while sporting a nice, professional look and feel, is, sadly, standard fare and underwhelming.

Comeuppance Review by: Brett and Ty
Posted by Ty at 9.5.11

that mst3k future war is great.

It's a shame that with Daniel "Bloodsport: The Dark Kumite" Bernhardt and Brian Thompson they couldn't make this work. Robert Englund looks pretty bored on that last cover...

Playingthedevil: Agreed. The MST3K Future War is a classic!

Sutekh: It was unfortunate that this is a disappointment. Love Bernhardt's nickname and Englund looked very bored in the movie too!

I thought this film was pretty entertaining, it's too bad Bernhardt hasn't done more films, speaking of which, you should definitely check out the other film he did in 97-"True Vengeance" I think you'd like that film more then this one.

Cool! Thanks for the suggestion! Will definitely pick up a copy.

I had to back deep into the archives to see what I thought of this one, and it turns out I had fun with it. Bernhardt is definitely the poor man's Van Damme, though so is Olivier Gruner to some extent. Bernhardt is funnier though.

Definitely agree with you: Bernhardt is funnier than Gruner!

I like this movie...and a few others he did...if he gets a director who knows what to do with him, it ends up a good movie...or at least one i enjoy for the one or other reason.

Happy you enjoyed Perfect Target! You're absolutely right: Daniel Bernhardt just needs a good director and then he can shine.