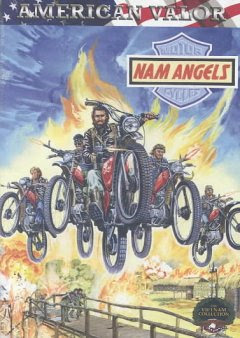 During the Vietnam war, Lt. Calhoun’s (Johnson) men are taken prisoner by a tribal group run by “A mysterious white man” who is also a “round-eye”, named, oddly, Chard (Wells). The top brass considers the trapped men “expendable” but Johnson does the only logical thing: he recruits four Hell’s Angels for a five-day mission and bribes them with millions of dollars of gold dust hidden in the hills of ‘Nam. All they have to do is help Calhoun rescue his men. The ‘Angels reluctantly agree, and there is some trouble and strife along the way, but a badass from West Texas who fights with a lasso and sawed-off shotgun (that would be Calhoun), teaming up with some tough biker dudes is going to be a double-team that will prove tough to beat. Will Calhoun’s gamble work?

At first, this Cirio movie seems to be yet another Vietnam/jungle slog that seems very familiar. But once the bikers come into the equation, things change for the better and you realize that you should be giving the filmmakers points for originality. It was only natural: take two exploitation genres - the (Vietnam) War movie and the Biker movie, and simply find a way to mash them together and make it work. Thankfully, it does, and Roger Corman can put this one in his win column. 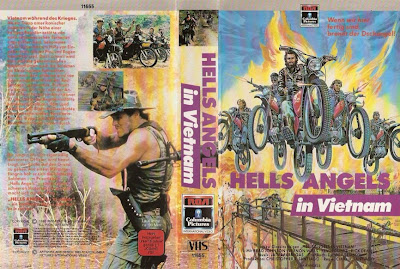 Brad Johnson looks like a young Tom Berenger, but this isn’t exactly Platoon (1986). Vernon G. Wells is properly evil, especially with his ponytail. Amidst the classic barfights and “pew-pew!” shooting scenes, at least on the Corman-released DVD we saw, we noticed some odd editing. It looked like the opening credits and perhaps some other scenes were re-edited for this DVD release. We can’t confirm this, and it’s doubtful they cut out anything good, but it would be interesting to see a different print.

If you read our Operation Warzone (1988) review, you’ll remember how we discussed that movie’s highly inappropriate soundtrack, with 80’s synthesizers blaring in ‘Nam. Well, Nam Angels falls into that same trap. But if you’re looking for logic, why are you watching this movie in the first place?  There are a lot of nonsensical things going on here, from the plot itself to the John Milton quote at the end. But bikers poppin’ wheelies in the jungles of ‘Nam is cool enough to make up for it.

Nam Angels is worth checking out.

Comeuppance Review by: Brett and Ty
Posted by Ty at 8.3.12

Nice one Ty, this is a Santiago I've yet to see!

Thanks! It is pretty fun, would be interested in your take on it, buddy!

Ty, I love this stuff. As someone who foolishly claims to 'know' movies, I am routinely astounded at some of the flicks you dig up and review.

Thanks, buddy! Really appreciate that.

We got some more weird action films coming up this month and definitely in April for AIP April.

Fast Gun, Riders Of The Sun, Stranglehold, The Silk films, Equalizer 2000, Dune Warriors, Devastator, Future Hunters, and Final Mission were my favorite Santiago films, though this one is pretty good in it's own right.

We loved Final Mission too! Will have to check those out. Cirio made a lot of fun flicks.

I love that you tagged "exploding huts". A definite one on my radar, and I'm glad it got three stars from you, makes me more excited to finally check it out.

Exploding huts are the best! We just watched Mannigan's Force (review coming soon) and there were a ton of exploding huts in the 1st 10 minutes.

If you have a chance to see Nam Angels, definitely check it out.

Great work Ty, I had forgotten all about this film but you're right it's inevitable that two great subgenres in Exploitation would come together and it's done so well in Nam Angels. I really liked this review, brought back good memories.

Thanks! We love when people say this brings back memories for them! We really appreciate that.

I'm nuts about Exploding Huts, so I just might have to check this out!

Awesome! Exploding huts are the best. Can never get sick of them!

You sold me! I'm all over this one!

We have a bunch more of Cirio coming up too including the original "The Expendables" and "Kill Zone".