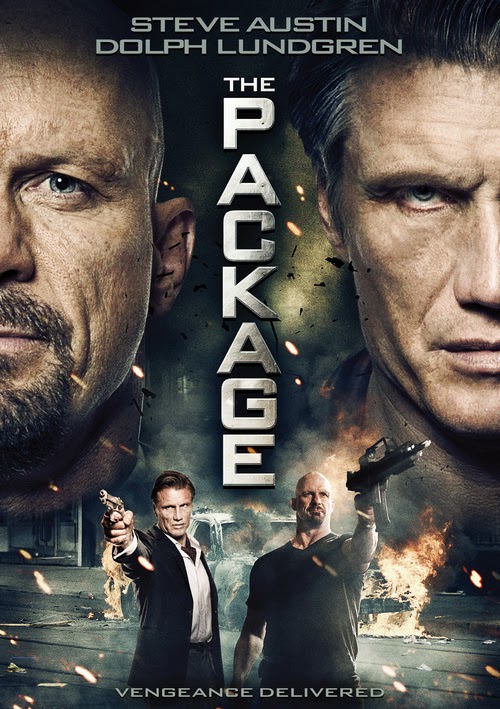 Tommy (Austin) and his partner Julio (Dopud) are Iraq and Afghanistan veterans who work for big shot mob boss Big Doug (Keenleyside). They go around collecting debts for Mr. Big and everything seems peachy keen. One day, Tommy is entrusted to deliver THE PACKAGE to rival crime lord The German (Dolph). Seems simple enough, but Tommy’s life is about to get a lot more stressful, because hordes of baddies start chasing him because they want what he’s supposed to deliver.

Devon (Shahlavi) commands a gang of highly-trained assassins, including token female gang member Monique (Ganderton), and others, such as Carl (Trimble) fight Tommy every step of the way. Tommy just wants to get back to his wife Darla (Kerr) but it’s going to be a battle to get there. Will Tommy survive, or will The Package be marked Return to Sender? Find out today...

We enjoyed The Package. It had an old-school vibe that we could really get into. All the movie really consists of is a series of fights between Stone Cold and various other characters. For us, the highlights naturally were the fight with Darren Shahlavi, who was so memorable as the baddie from Bloodmoon (1997), the fight with none other than Jerry Trimble, who we thought looked and sounded great, time has been very kind to him and we hope this revives his movie career, and of course the Dolph-Stone Cold battle that the whole film leads up to. Dolph is known only as “The German” - it seems he plays a lot of Russian, American, and now German characters, never any Swedish ones it seems - and it was nice to see him as a baddie after a long string of hero roles. It seems his last bad guy role, or at least the only one that comes to mind, was way back as Ivan Drago. 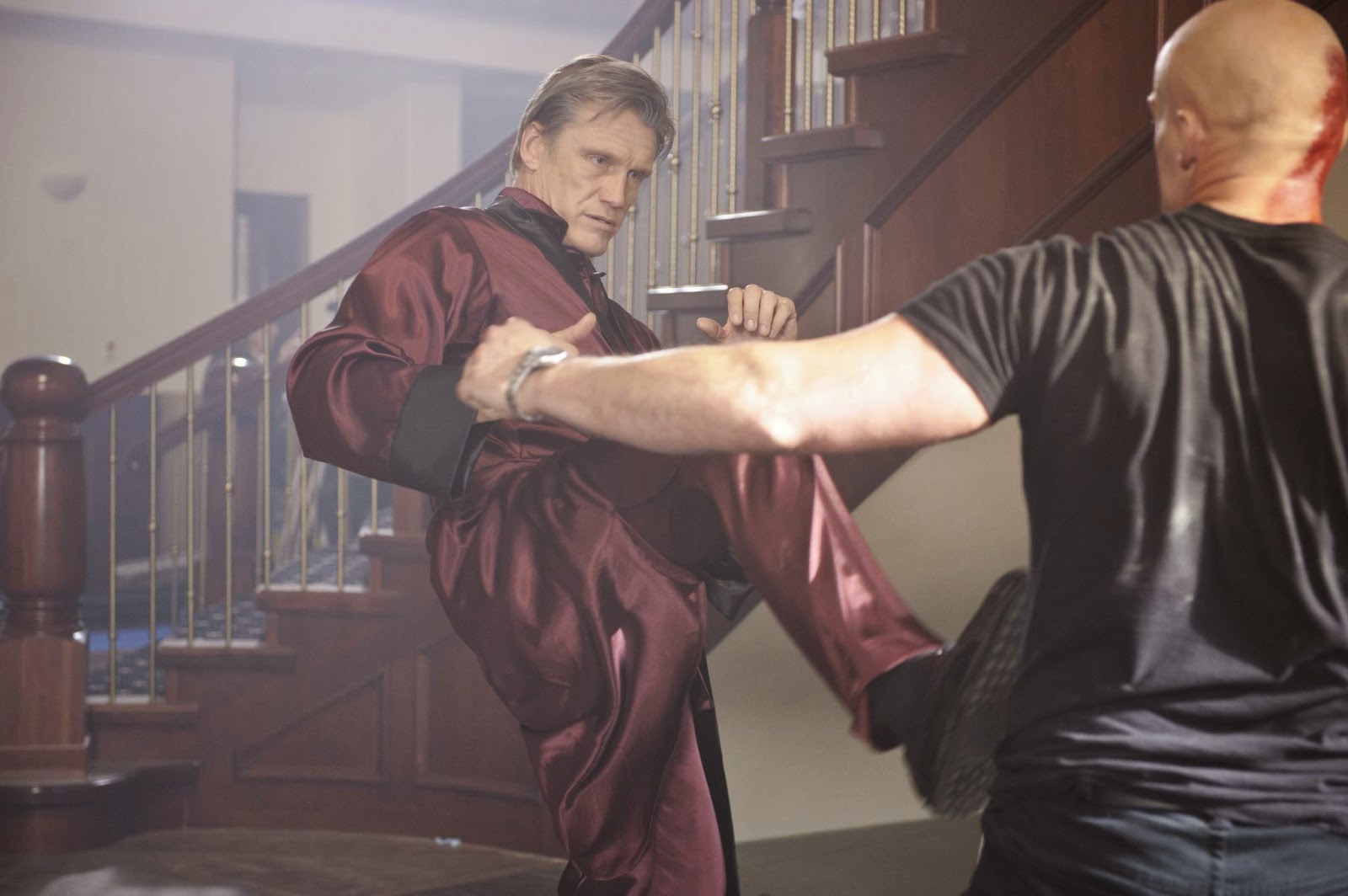 Not to be confused with the Gene Hackman vehicle The Package (1989), this particular The Package makes for entertaining and pleasant DTV action viewing, and has a different look and feel than another Anchor Bay-released Dolph outing, The Killing Machine (2010) (which interestingly also featured actress Monique Ganderton) - so if you’re worried that Anchor Bay is just pumping out a mindless, samey stream of Dolph movies, have no fear, that’s not the case. Besides, where else will you see Dolph extolling the virtues of a good fruit salad? That alone makes The Package worth at least one viewing.

Of course, the classic cliches are also delivered (pun intended?) - the Prerequisite Torture of the hero, the wife of the hero who wants him to quit his dangerous job/lifestyle, and a favorite of ours, when the baddies find a place where they know the hero is, then break out at least one machine gun and proceed to shoot up the place from outside, in an extended shooting scene, rather than go inside, giving the hero ample time to survive. 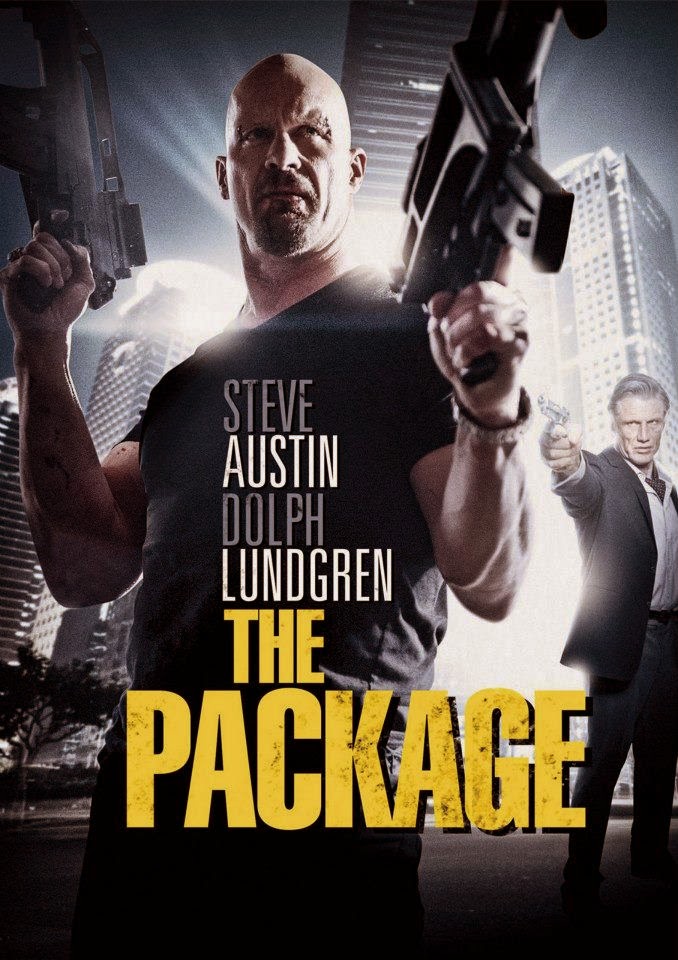 It was comforting to watch a solidly-made modern-day actioner - it always helps to know you’re in capable hands (speaking about the writing and direction, and all the other technical aspects, which were all pretty much right on target). Director Johnson had previously made Pit Fighter (2005), so we were familiar with him from that. The Package gets our stamp of approval.

Comeuppance Review by: Ty and Brett
Posted by Ty at 9.6.14

Dolph played a Swede in MEN OF WAR as Nick 'The Swede' Gunar, and allegedly in SWEEPERS as Christian Eriksson and THE EXPENDABLES as Gunnar Jensen.

yeah totally agree: this was good stuff and had a cool old school vibe to it. Jesse Johnson has made some decent DTV action flicks in recent years: this, Charlie Valentine, The Butcher with Eric Roberts. All good stuff.

Anonymous: It's always fun to see Dolph as a bad guy. He always delivers.

Agreed, I really dug this movie.

Another modern-actioner I would highly recommend is "In The Blood" which stars MMA fighter Gina Carano.

Definitely want to see that. Waiting for it to come from Netflix.

In the US-Version Dolph is "The German".
In the German Version he is "The Swede".

Haha. That is cool.