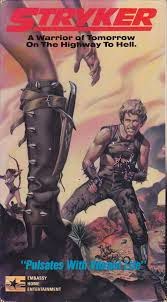 
In a post-apocalyptic world, water is scarce and is the most sought-after commodity in the new desert-like earth. When a woman appears who knows where to get a large supply of water, an evil, Sid Haig-like baddie kidnaps and tortures her for the information. However, only one man can rescue the girl and help spread the agua to the masses – Stryker (Sandor), of course. So because it’s post-apocalypse, everyone puts on their wackiest getup and gets in their junkiest car, and the battle is on. During the “Quest For Water”, which isn’t a sequel to Quest for Fire (1981), Stryker and his babes have to contend with many obstacles, including some Jawa-like pygmies. Will they live to hydrate again?

Out of all the many post-apocalyptic movies that hit video store shelves in the 1980’s, our personal favorites tend to be the Italian ones, such as 1990: The Bronx Warriors (1982) and Escape From the Bronx (1983). Italian Post-Ap’s (as we call them) (not really) seem to, generally speaking, have the most verve and pizazz. This doesn’t leave a lot of room for snoozers like Stryker, which doesn’t bring a lot to the table.

We’ve probably seen more Cirio movies than anyone, and this ranks towards the bottom as far as what we’ve seen of his to date. He even repeated the formula again with Raiders of the Sun (1992), another Post-Ap slog, but that one at least has Richard Norton (Norton also played Straker – pronounced “striker”- in Crossfire, so they have that in common). Though on the bright side, here we have Steve Sandor. 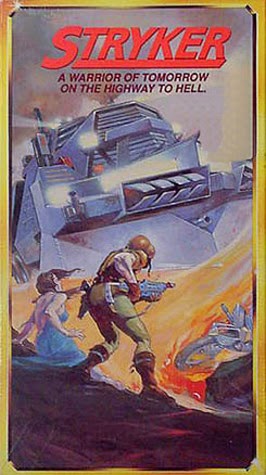 While Sandor was unforgettable as Ollie Hand in Trained To Kill, U.S.A. (1973), here the character of Stryker has no real definition. We really get no sense of Stryker as a man or as a hero. On a scale for character development that we just invented, for the entire cast, not just Stryker, on a scale of 0-10, the CD scale for Stryker, the movie, is -5. That’s right, negative character development. There’s such a deficit, you end up owing the movie by the time the end credits roll. So in this particular wasteland, Stryker is just a generic dude with a beard.

Or perhaps more accurately, he’s just another supposed action hero in the 80’s named Stryker. Let us remember the aforementioned Richard Norton, as well as Lance Henriksen and Wings Hauser, among others. So you don’t really rally behind Stryker, as much as you might do with, say, Steve Rally.

So with the movie as a whole, we’ve really seen it all before, so it’s not very engaging. And that’s certainly true in this case, as Stryker the movie is especially Mad Max (1979)-y. The filmmakers really didn’t even try to hide the fact that it’s a blatant knockoff. But that’s the problem: the lack of window dressing in that sense really hurts, and then boredom sets in. But in the positives column we have a cool score, and some neat violent bits, but those two things aren’t enough to keep it all afloat, unfortunately. The movie is as dry as the climate it takes place in.

So pray the “nuc-u-lar” (as the narrator in the intro part clearly pronounces it) bomb never hits, if for no other reason than it would mean we would be LIVING inside the world of Stryker. And that would be the real catastrophe.

Also check out a write-up from our buddies The Unknown Movies and The Video Vacuum!

This was a slightly average, but still good, post-apoc, and it was an important step in Cirio's career. He started to copy a blockbuster in almost every movie: from Mad Max to First Blood to Platoon and back again. One could even argue that he was the 1980s version of The Asylum and a mockbuster pioneer. If this movie had been made by The Asylum, it would probably have been called Maxxter, but Stryker is infinitely cooler.

My apologies if you've read this before, but great review, as always. The lead was stellar!

No mention of Airplane's Ted Striker? You really could have culled some jokes from that well.

It amazes me that if water was so scarce, why did the woman leave it to traverse the nuclear wasteland? Why didn't she just stay there and drink, bathe and do laundry? These are the things my buddies and I would have brought up. I suppose it's a MacGuffin, but still.

Joe: Totally forgot about Ted Striker from Airplane. Haha. That was a great movie. You make a good point. Just stay where you are.

So, I Googled "Cirio" at work to research what the First Blood knock-off was like. The first image was rather interesting.

Haha, what was the picture?

I thought this one was pretty good.

BTW speaking of Mad Max, are you excited for the upcoming Fury Road?

Don't forget Hands of Steel and Raiders of Atlantis! Those are my favorite Italian Trash flicks.

Excellent review! Always wondered about this one. Now I know not to bother. LOL

Agree on Raiders and Hands. Got to love Paco Queruak. He is a national treasure.