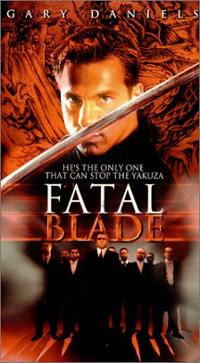 
LAPD cop Richard Fox (Daniels) finds himself caught in the middle of a Yakuza war as he tries to get to the truth about the death of his partner. While crime boss Bronson (Rivers) is able to run wild with his drug business because he has some dirty cops on the take, Japanese swordmaster Domoto (Nakajo) comes to town for his own reasons. At a certain point, those reasons intersect with Fox’s, and the two men from different worlds suddenly find they have more in common than they originally thought. Caught in the middle of all this are the women - Saemi (Matsuda) and Fox’s wife Linda (Messuri). Will Fox come out victorious - or will he end up on the wrong end of Domoto’s FATAL BLADE?

Fatal Blade is trying to be like a PM movie. This isn’t a criticism, necessarily; we wish more productions would at least try to hit the heights of the Gary Daniels three R’s of awesome: Rage (1995), Riot (1996), and Recoil (1998). The only problem is, PM doesn’t do “FM” - fast motion - and this movie does. So while it tries to do some car chases/car blow-ups in classic PM fashion, it commits the no-no of speeding up what fight scenes there are. You don’t NEED to speed up Gary Daniels. This was really annoying. There should have been more un-sped-up Martial Arts fights and less gun-shooting. Daniels even disappears for decent chunks of the running time. But when he is on screen, he has classic 90’s hair which we all love and enjoy.

While the movie is competently made, it doesn’t really reach the heights of other “East meets West” actioners like Red Sun Rising (1994), Sword of Honor (1996), American Dragons (1998), and especially all-time classic Showdown in Little Tokyo (1991). That’s because this came out in 2000, a death-time for DTV product. It even brings to mind the dud Double Deception (2001) at times. Things were just better earlier on in our nation’s history. Sure, it has a classic “Final Warehouse Fight”, some casual racism, a conspiracy that goes all the way to the top, and a guy screaming his head off as he shoots a machine gun, but we were somehow hoping for something that tied it all together a bit more. 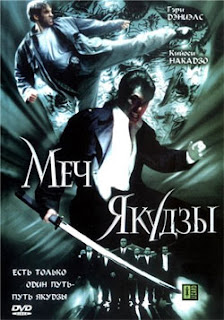 We do give the movie credit for the good amount of scenes that are spoken in Japanese and have subtitles. This showed to us that they were serious and it helped things along. However, most of the English dialogue consists of people shouting “what am I paying you for!??!” The Gary Daniels revenge plot should have been streamlined and more hardcore. Just a few years on from The Quest (1996), we have a very different-looking Jack McGee doing not very much  and not being used properly...and is that Cuba Gooding SENIOR in a nothing role as a pawn shop owner? Not that we’re not happy to see him, but...WHY?

It also should be mentioned that a common phenomena in low-budget DTV product happens here: smaller-time actors are hired that look/behave like other actors (or should have BEEN other actors). For example, the guy that played Bronson also could have been Robert Patrick, Judd Nelson, Dean Cain, Frank Stallone, or Charlie Sheen during his “Charles Sheen” period.  And the guy that played Mitchell, the police Lieutenant, could have been James Russo, Ed Lauter, or...or maybe we just watch way too many movies.

But we’re clearly addicted and can’t get enough - and we do it all for YOU, our lovely readers. We live to inform you about movies like Fatal Blade. If that’s a crime, then call Richard Fox and have us arrested. (See, the fact that we think Richard Fox is a real person pretty well proves our initial point).

Gary Daniels is credited as Associate Producer, as is frequent Daniels collaborator George Cheung, and it features the West Coast gangsta rap track “187” by a rapper known as G-Sleep. Despite all this, Fatal Blade really should have been better. To be fair, there are some threads of the movie that stand out, but it was lacking in other areas. This Blade should have been sharpened to a finer point.

Also check out a write-up from our buddy Cool Target!

I quite liked this one. Okay, compared to Rage, Riot, Recoil it's a bit disappointing but on it's own terms it's decent. Gary definitely got the less interesting character. The actor that played Domoto was awesome. I think the issue is that the film doesn't put the two protagonists together until the last 10 minutes. Fox and Domoto should have been teaming up around the 30 minute mark.

This was the first Gary Daniels film I saw back in 2000 so it has sentimental value to me.

I thought this one was pretty fun, I didn't mind the occasional fast motion. I also liked Double Deception.

Another great "East meets West" film is Last To Surrender with Roddy Piper.

Jack: Totally agree. You're right about the team-up occurring earlier. It is a bit unfair to compare every Daniels movie to the "Three R's" but, we wanted to give some perspective.

Anonymous: This site is all about sentimental value so we appreciate your input. :-)

Venom: We reviewed and enjoyed Last To Surrender. They are similarities between Double Deception and Fatal Blade but we prefer Fatal Blade.

I do like this and some of the other mentioned East meets West scenario films. In fact I'll take them over War and the Rush Hour films.

Enjoyed War, solid action film. One of the best is Showdown in Little Tokyo. Dolph and Lee rock in it. Haha.