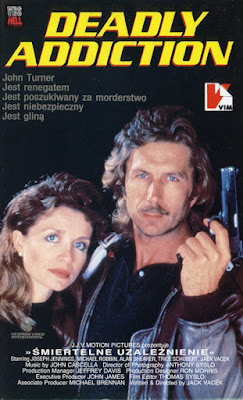 John Turner (Vacek) is a COTE (Cop On The Edge, for those that may not know) in L.A. After some drug gangs murdered his wife at some point in the past, he made it his personal mission to clean up the streets and get rid of all the drug pushers. It's not going to be easy, especially when Turner comes up against the evil and seemingly indestructible baddie Turko (Cummins). Meanwhile, he finds time for romance with Sara (Schubert) and to mentor a young boy, Hector (Munoz). Is there anything Jack Vacek - or John Turner - can't do? We urge you to find out today!


A blast of 80's awesomeness, Deadly Addiction (AKA Rock House) is a true gem waiting to be rediscovered. Comparisons to some of our favorites such as L.A. Wars (1994), "Geteven" (1993), and Death Flash (1986) - and, yes, even Samurai Cop (1991) and the almighty Stickfighter (1994) - are completely warranted. We're proud to add this fun and enjoyable film to that vaunted roster.


Jack Vacek is our new hero. He is very, very cool. He has a cool mustache, cool sunglasses, a cool jacket, rides a variety of cool automobiles, and has a wide variety of stylin' shirts. And while he plays by his own rules, his COTE-ness can only be described as happy-go-lucky. His amiable charm comes out whether he's battling a picture-perfect BYC (Washington), shooting and killing baddies, or adopting injured dogs and troubled children. He always knows just what to do and say. He may have just replaced Steve Rally in all of our hearts. And that's not an easy thing to do. 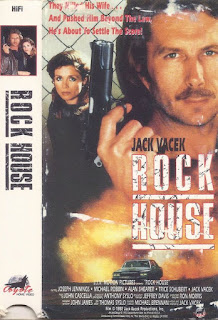 On top of being likable, and even having something of a childlike quality, John Turner (or is it Jack Vacek? It's hard to tell when one ends and the other starts) seems to have modeled his life after Sonny Crockett. He has the same job, a similar attitude, and a similar wardrobe. He even lives on a houseboat like Crockett. But instead of a Ferrari, Turner drives a Shelby Cobra with the license plate BEER RUN. Sure, it may be an odd choice for a policeman, but it's so slick it's hard to deny the charm. Welcome to Miami Vacek. But in L.A.

There's a classic 80's dance club (could it be the same one from Party Line?), and the whole film has a fantastic soundtrack, alternating between the classic sax, the wailing-guitar 'Chase Music', and to a heavy metal tune during a raid on a gang called The Rockers. Much like in the cartoons when it gets so hot the mercury bursts through the top of the thermometer, the awesomeness quotient is getting out of control!

The baddies hang out at a restaurant called Degusta, named for the head crime boss. Would you eat at a place with a name so close to 'disgusting'? Was this on purpose? Who knows? Who cares? Especially since Turner's hangout is a bar/restaurant called The Poopdeck. Apparently it is/was a real place in Hermosa Beach, California. And Vacek trumped Tom Hanks by a year with the 'Turner and Pooch' subplot. Naturally, the whole thing comes to a head at an abandoned factory of some sort. It's hard to tell what they would have made, so we called it the Shootout Factory. We've all seen them before. Get ready to hear that phrase again in future reviews.

Deadly Addiction hammers home all the right notes we love to hear again and again. It's a movie that says "subtlety is for suckers; it's party time". We can get on board with that. It is just so much fun and it's so entertaining, anyone who fails to get any enjoyment out of it should probably be thrown into a volcano.


Schedule your "Vacek-tomy" as soon as possible.

NOTE: As of this writing, the stream of this film on YouTube is not the best. Still, it’s worth seeing because the VHS is so rare.

This one was pretty good. I have to rewatch at some point. No one seems to have heard about it.

Agreed. It's definitely a hidden gem for sure. Should be more well known in the cult movie circles. It can be the next Miami Connection or Samurai Cop.

Thanks for reviewing this hidden gem. Never heard of it. Really enjoyed it all the way through. And I even anticipated the angry police captain and there he was! I even looked up the poop deck and found it is a real place. It's over an hour from where I live which is pretty cool. Great review.

Thanks for the kind comments. Maybe one day you can a take a drive to The Poop Deck! Glad you enjoyed it. :-)