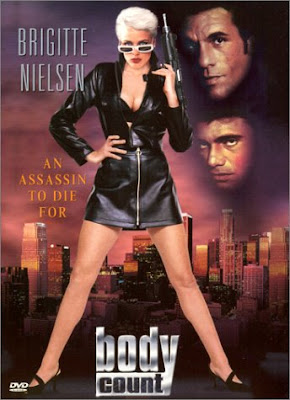 AKA: Codename: The Silencer

Eddie Cook (Davi) and Vinnie Rizzo (Bauer) are not just two of New Orleans’s finest, they’re also best buddies. But their jobs are about to get a heck of a lot more challenging now that Makato (Chiba) and his partner Sybil (Nielsen) have come to wreak havoc in the Big Easy. Makato is a sly and crafty hitman and expert marksman. We as viewers know this because he has a special assassin hat. Further complicating the lives of Cook and Rizzo is the entrance of their new supervisor, Special Agent Janet Hood (Ambuehl). Will Makoto and Sybil’s killing spree ever end?

Body Count is yet another victim of what we call the Lone Tiger Effect. For those who don’t know, this is when a movie gets a great cast of B-movie faces together and you think you can’t lose as a viewer – and then you do. Perhaps it’s a classic case of “too many cooks”, but despite the stellar cast, Body Count just doesn’t deliver the goods. 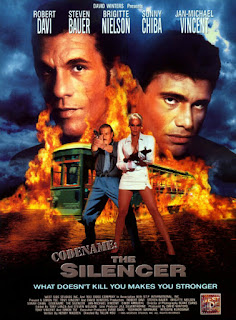 That’s not to say there aren’t some high points – someone walks away from an explosion in slow motion, Davi and Bauer have good chemistry together, and there’s a very impressive PM-style car flip/explosion. There should have been more moments like these. Additionally on the plus side we have a competent, classic-90’s video store look and some nice New Orleans locations. This includes, almost apropos of nothing, a stereotype Southern Sheriff. But the movie doesn’t really hook you in, and the pacing seems off. The police station has a poster for The Terminator (1984) right there in the squad room, so it shows the local cops have a nice sense of décor.

As for the cast (besides the aforementioned fan favorites Davi and Bauer), we have Brigitte Nielsen, who was given a much meatier role in Mission of Justice (1992). It was nice to see that Sonny Chiba was all over the movie and not just in a small role. He got to show off his physical prowess and had a bunch of great outfits to boot. Jan-Michael Vincent had a glorified cameo, and even in a small role appeared a little tipsy. Ambuehl, last seen in Dark Breed (1996) was primarily eye candy despite the fact that the scriptwriters attempted vainly to make her more than that.

The problem is that the movie isn’t wacky enough or different enough – it’s just kind of standard fare. You’d think the cast could make more out of the material, but even they can’t really pull that off. Comparable movies about a Japanese-American crime-ridden culture clash include Red Sun Rising (1994) (better than Body Count) and Double Deception (2001) (actually worse than Body Count).

Featuring the song “All Woman” by Mark Ferrari, Body Count left something to be desired.

This movie had mediocrity written all over it. In Europe, it went by its original title, Codename: Silencer. After the Streetfighters, Chiba always seemed to wind up in disappointing movies.

You're definitely right about Chiba. His Japanese movies are better.