Kat Lang (Sassoon) is a no-nonsense L.A. cop with an attitude. When her sister is murdered after taking clandestine photos of a political assassination in the Philippines, Kat travels to Manila to get answers. While there, she gets caught up in the female kickboxing circuit and meets the charismatic Alcatraz (Shaner) who helps her out and becomes her love interest. She also meets fellow fighters Lorda (Moore) and Sulu (Lintan - not George Takei in a wig) and decides if she wants to find who was responsible for her sister’s death, she’s going to have to enter the ring herself and fight in the popular tournament called The Kubate. This is clearly the female version of The Kumite devised by the same guy, who had a cold that day.

So she hires Bayani (Dantes) to train her. When an underground terrorist group called The Black Brigade (made up of angry Filipinos) rears its ugly head, Kat truly snaps into action. Predating that band by many years, now we see the true meaning of Cat Power!

The prolific Cirio Santiago strikes again with this outing which is classic 90’s, an entertaining mixture of mindless shooting, Martial Arts fights, and shower scene-based nudity. Cat Sassoon, who we were familiar with because of Bloodfist IV (1992) and Bloodfist VI (1995), wears some amazing outfits, and it was nice to see her as the main hero.

Melissa Moore, who we were also fans of, not least for appearing in the immortal classic Samurai Cop (1989), provides a worthy foil for Cat (or Kat, depending on which letter/person you prefer), and gets to do plenty of Melissa Moore-Fu. The movie as a whole is a pioneer in the genre of leotard-fighting, and there’s some diversions into “Arnis”, or stickfighting, and of course there’s the prerequisite torture scene. 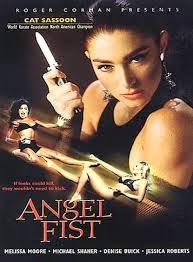 Shaner was also no stranger to the Bloodfist series, having appeared as none other than the infamous Baby in the original 1989 installment. With his Mitt Romney/Matt Dillon/Robert Davi-style looks, he stands out among the Filipino cast, but their line deliveries are much more priceless. Even news reporters get noteworthy moments - Apparently in the Philippines big stories are known as “newsbreakers”. And we didn’t even mention the classic “Mr. Big”, the white-suited, bearded head of it all, named Carrion (Carreon - apparently Cirio isn’t big on more than one-letter name changes).

Plus, the embassy protests and murders make this movie more relevant today than ever. That’s right, Angelfist is a relevant film! But of course, the showstopper is the nearly-naked fight scene where Cat fights off baddies wearing basically nothing. This scene is effective no matter how many times Cirio uses it (Silk 2 and Firecracker, anybody?).

While mindless, it’s nice to see beautiful women beating up baddies and looking good in the process, rather than be in the background as news reporters or nagging wives. For a non-Rothrock girl-power movie, Angelfist is a treat.

Also check out write-ups from our buddies, Fist Of B-List and The Video Vacuum!
Posted by Ty at 1.1.15

I have come across this movie countless times in old video stores in my travels, and never bothered to rent it. It sounds like a missed a good one.

I was always a fan of Rothrock, and I'm glad you mentioned her in the review. I think she was the pioneer for female fighters in this genre.

It always amazed me how quickly martial artists could travel to a foreign land and quickly immerse themselves in the illegal local street fighting shenanigans. It's a fairly common staple of the genre. I'm sure you'd agree.

Thanks! Appreciate the kind words. It's definitely worth watching with a couple of buddies. Rothrock usually delivers the goods. Angel Of Fury and Undefeatable are classics. We love our street fighting or punchfighting shenanigans! Haha.

It's a damn shame Cat died so young.

Totally agree. We would probably get more fun movies like this from her if she was still around.

I have been seeking Undefeatable on DVD for eons now.

Definitely worth tracking down! It's silly fun.

As we know of, there's just one version of Angelfist.

Did the producer lift cat sassoon by the grouch