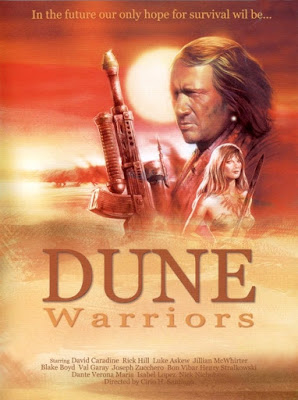 In New California in 2040, water is the most precious commodity. The world is a destroyed, desert-like wasteland and most people are just scraping together to survive. When a roving gang of toughs led by the sinister William (Askew) and Tomas (Nicholson) invade the small village of Chin Le because they have a water supply, all hell breaks loose. Wanting to fight back against the new situation she and her fellow survivors have found themselves in, a young woman named Val (McWhirter) puts together a team of heroes. She finds Michael (Carradine), John (Hill), Dorian (Boyd), and Miranda (Lopez), all of whom have specialties when it comes to the fighting arts. Will our small band of plucky heroes be able to expel the baddies once and for all?

As Dokken once sang, “we’re the Dune Warriors, don’t wanna Dune no more.” We’re pretty sure those were the lyrics. If you've seen such films as Steel Dawn (1987), Raiders of the Sun (1992), Wheels of Fire (1985), Stryker (1983) or any Cirio Santiago or post-apocalyptic movie, you may know what to expect with Dune Warriors. It's really just more of the same. That's not necessarily a good thing or a bad thing. It just fits in with its other compatriots in the genre.

Because David Carradine is a man who travels around doing Martial Arts, there's a certain Kung Fu vibe, and because Rick Hill and his buddies are guys who do jousting tournaments on motorcycles, it may recall Knightriders (1981) to a certain degree, but those are the only elements that differentiate Dune Warriors from the pack at all. It's all very standard stuff, but the U.S. VHS is 77 minutes long, so that is very merciful and it doesn't take up much of your time. 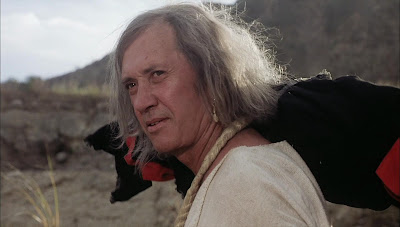 The whole thing opens with a bang, an action scene that appears to be William's raid on another small village. It's chock full of shooting, blow-ups, and the like. There's even a decapitation. It feels abrupt and like it should have been in the middle of the movie, but I guess that's part of the charm.

The character names are some of the most undistinguished we've seen in years. Oh boy, here comes Michael, John, and William. It's the future, people. Where's Paco Queruak when you need him? The music was done by a mysterious collective of musicians known as The Score Warriors. The end credits tune was some of their best work. We may never know who they are, but their name is more interesting than Michael or William.

We've seen the whole "teaching the farmers to fight so they can defend their village from roving marauders" plot many times before. Like we said, Dune Warriors doesn't add a whole heck of a lot to the genre, but it's not offensively bad or anything. There isn't much in the way of character development so it's kind of hard to get to know the people we're supposed to care about. Action mainstays like Carradine, McWhirter, and Hill get by on their natural talent and screen presence, but there's only so much they can do. For better Rick Hill, check out Fast Gun (1988). For better McWhirter, check out Last Man Standing (1996).

While it is sort of impressive that Cirio could make basically the same movie over and over again - Dune Warriors is especially close to the aforementioned Stryker; it's a veritable remake, including a similar scene involving what we called "Jawa-like Pygmies" in our Stryker review - it would've been nice to see him break the mold a bit this time around. By 1991 I think we as video store patrons kind of got the idea. But if you like these kinds of post-ap movies and you see it cheap somewhere, it couldn't hurt to pick it up. But don't go in with high expectations.

Comeuppance Review by: Brett and Ty
Also check out a write-up from our buddies, The Video Vacuum and DTVC!
Posted by Ty at 31.12.21

Great review. Judging by what you wrote it sounds like a chore to sit through. I made that mistake several times. At least they should have gave the hero's cooler names.