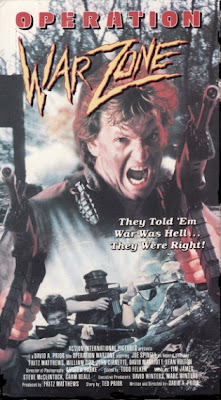 "They Told 'Em War Was Hell...They Were Right!"

Get ready for yet another romp in the jungle courtesy of  David Prior and AIP. In this particular Vietnam war scenario, Sgt. Holt (Matthews), Cpl. Butler (Zipp) and Cpl. Adams (Holton), among other soldiers, are bravely fighting in the impossible conditions of the ‘Nam jungles. During a firefight, they rescue two Tunnel Rats, Jenson (King) and Hawkins (Cianetti). It comes to light that there is a mysterious, unseen man, dubbed “The General” that has classified documents that could supposedly end the war. Much of the madness can be traced back to Washington and the corrupt George Delevane (Spinell). In a Firehawk-like situation, the soldiers don’t know who to trust, and there could be a conspiracy that goes all the way to the top. Will Holt and the boys make it home alive? Or will the behind-the-scenes dealings get the better of everyone?

Mindless shooting. Exploding huts. Endless machine gun firefights. Uninteresting explosions. Brain-numbing stupidity. Inexcusable boredom. Zero character development. Unexplained Australians. Goofy chases. Prerequisite torture sequence. An unnecessary fistfight scene that is so absurdly extended it makes the “put on the glasses” scene from They Live (1988) look like a blip. These are some basic snapshots that should give you some idea of the “we have to sit through it” vibe of Operation Warzone.

Matthews, Zipp and Holton are all AIP regulars, doing many things both in front of and behind the camera. It seems, contractually, Zipp cannot be in a movie that doesn’t take place in a jungle. So he must have been right at home. Holton looks completely different that he did in White Fury (1990). In ‘Fury he’s a snot-nosed little punk, and here he has an adult mustache and appears at least ten years older - but ‘Warzone  came out two years BEFORE White Fury! How quickly they grow up...or something like that. The legendary and excellent actor Joe Spinell is on hand, and his presence is much appreciated, but it’s what we call a “sit-down” role. In other words, in many instances, from Mickey Rooney in Maximum Force (1992), to Henry Silva in The Violent Breed (1984), to Spinell here (just to name a few), the movie production will hire a name actor to do some scenes over the course of a day or two, give or take. But all the actor’s scenes are sitting down. They never leave their chair. It just kind of exposes the penury of a given production. Here Spinell gives his sit-down role, which is better than many of the other actors’ more action based scenes, but the bottom line is the movie definitely could have used much more Spinell.

Another thing worth mentioning is the highly inappropriate music. Although the movie is set in 1960’s Vietnam, a happy, upbeat, jaunty 80’s synthpop song that sounds exactly like Wham!’s “Wake Me Up Before You Go-Go” blasts onto the soundtrack. I know it seems incredible, but it’s true. What were they thinking? That being said, Steve McClintock’s closing credits dirge “Shadow Of A Doubt” is catchy and one of the best things about Operation Warzone. You gotta hand it to AIP. Almost all their movies have at least one catchy, memorable, original song. It’s really a fairly dependable thing. No matter how “bad” the movie is, at least there will be a song. When is someone going to release a CD, “AIP’s greatest hits”? It would be amazing!

Man, it seems like that AIP April has been a bit of a slog. Too bad David Prior didn't cast his brother Ted in this one.

It has been a little bit of a slog. We have three more to go. The next one has Dan Haggerty. The last one is the AIP classic Deadly Prey!

What a shame, with a cover like this it should have been ace.

Totally agree with you, Sutekh! AIP has the best covers, but usually never lives up to them. Except Night Of The Kickfighters and Deadly Prey.

I love this film. The first time I watched this I was in amazement at the 'inappropriate' music. It's so rude it defies belief. This is what it's all about in my opinion.

Simply classic. When I first saw this and heard the music I was in disbelief. Me and my brother were in tears and I'm not making this up. In many ways this is as legendary as 'Deadly Prey.' Ted Prior does appear in the movievery briefly too, taking as ass whipping from Fritz.

We are very happy you and your brother enjoyed this! My brother and i had the same funny reaction to the weird 80s music too!

As I am prone to do, I was watching this recently reliving the good old days. The scene where some dude throws a grenade into an empty hut in the middle of a field in slow motion encapsulates the rudeness and grandeur of these movies. There is no possible way you could make this seem dangerous or a vital act of war, but somehow David Prior did. The collateral damage of an exploding, empty tent must have been devastating.

David A. Prior is a genius. Your comment is brilliant. Worded perfectly.