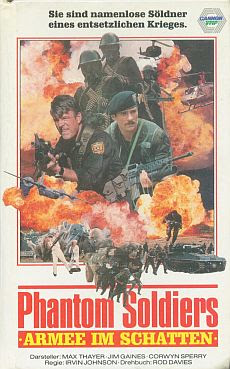 A big thank you to Sutekh from Explosive Action for providing us a copy! Here is a link to his review.


During the Vietnam war, Green Beret Lt. Michael Custer (Sperry) and some of his fellow soldiers go MIA. Custer’s brother, Texas Ranger Dan Custer (Thayer) wants answers, so he travels to the border of North Vietnam. What the Custer brothers don’t know, is that they’re up against the Phantom Soldiers - terrifying, seemingly invincible, remorseless killing machines. They wear gas masks with weird protrusions and have heavy arms. They kill, destroy and explode everything in their path, and no one is safe. Can the Custers, or the entire U.S. Army for that matter, stop them? And where did they come from? What do they want? The secrets of the mysterious Phantom Soldiers will be revealed...


This is the ultimate Exploding Hut movie. You think you’ve seen exploding huts before? You ain’t seen nothin’ yet. Phantom Soldiers is a feast of massive explosions, constant shooting, guard tower falls and countless deaths. The opening sequence alone is mesmerizing and must be seen. Director Teddy Page was surely in a state of grace when he executed this brilliant sequence. 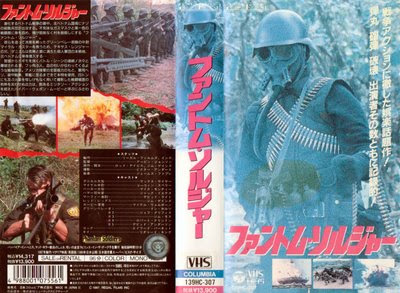 While the opening sequence is definitely a movie highlight, there’s still plenty of awesomeness on show for the rest of the film. Max Thayer, who must have it written into his contract that he won’t appear in a movie unless thousands of people die - remember this is the guy from No Dead Heroes (1986) - plays a Texas good ole boy with plenty of Dan Rather-style down-home expressions. Interestingly, Phantom Soldiers marries the over-the-top violence with an interesting concept, as well as subtle comments on war. That keeps it from becoming the mindless shooting we always see. Just a dash of originality goes a long way. You won’t forget the Phantom Soldiers.

A true cult rarity, Phantom Soldiers never received a VHS release in America, and as of this writing, has also not received a DVD release. More people stateside should know about this movie. People should have been talking about it since the 80’s, but it never entered our consciousness because in this country, it’s as “MIA” as Mike Custer.


Speaking of which, Sperry as Mike Custer resembles Sgt. Slaughter. No one really talks about Sgt. Slaughter anymore, which is a shame, and, seeing as how this movie is filled to the brim with 80’s awesomeness, the legendary wrestler was surely an influence.

The funny acting/dialogue/dubbing we’ve come to love in these Philippines-shot productions is clearly on display, along with the ever-present high-quality blow-ups. The choice to name our heroes “Custer” has some interesting historical connotations - was this done on purpose? (Side Note: Hal Moore, the Vietnam hero immortalized in the film We Were Soldiers, headed up the First Battalion of the Seventh Cavalry, the same as George Armstrong Custer).


Nonstop action, ultra-violent in a Wardogs (1986) sort of way, and just plain badass in every manner imaginable, make sure you see Phantom Soldiers.
Comeuppance Review by: Brett and Ty

First up, congratulations on hitting 500 reviews! What a milestone and I hope to get to at least 100 sometime soon haha!

Phantom Soldiers was amazing. Just when you think they can't blow more shit up, they go and blow more shit up. So many great scenes. I love when Max Thayer takes the skull to his captain who just goes "Ah another one" and puts it on the shelf with the rest. It's so obviously plastic!

Awesome! Congrats on 500! It must be truly amazing - exploding huts, tower falls galore, nuances of both Dan Rather and Sgt Slaughter? Inspired lunacy, that's what it is. Wonder how long till netflix gets it ...

Explosive Action: Thank you! haha, hope you get to 100 reviews soon! Got to love Max Thayer, the master of mayhem.

Dr. Algernon: Thanks! Great question, Dr. There were guns of all types, Pew-Pew and otherwise.

Fortunately Ioffer has this film for sale.

Congratulations on reaching 500, that's some achievement. Phantom Soldiers sounds like a blast!

Venom: Cool! How much is it?

A Hero Never Dies: Thanks! Phantom Soldiers is a ton of fun! Would be interested in your take on it!

Ioffer discs are all bootlegs, it will be from the same Japanese VHS that I have. Perhaps we can trade venom, send me a message :)

Venom: Hope you can watch it soon!

Markus Welby1: I have a feeling you will enjoy the explosive mayhem! Would be interested in your opinion.

Good review and congrats on 500!

I too think it's a shame no wonder talks about Sgt. Slaughter any more, as he's one of my all time favorite wrasslers. Let's reticify that. I'll start. Who else had the Sgt. Slaughter GI Joe action figure? I know I did.

Congrats on 500 reviews! I'll explode some huts in your honor!

@ thevideovacuum - I too had Sgt Slaughter's action figure.

thevideovacuum and Dr. Algernon: That is so cool you guys had a Sgt. Slaughter action figure! He was one of the best wrestlers!

Hey man, congratulations on 500! A great milestone. And this sounds like an excellent choice for 500, what with all the exploding huts and whatnot. Here's to 500 more and beyond!

Thanks DTVC! No one can get sick of exploding huts! Would love to read your opinion on Phantom Soldiers.