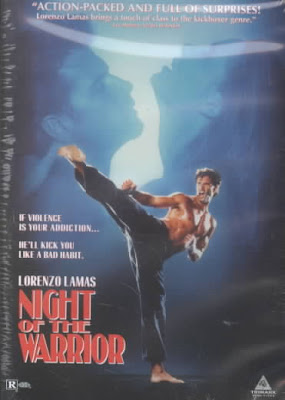 Miles Keane (Lamas) is a motorcycle-riding smart-ass bad-ass who is an amateur photographer. He owns a club with his mother. He has to pay back a loan to gangster Lynch (Geary). In order to pay back the loan, rather than use money, he is forced to fight in, of course, underground punchfighting tournaments. After years of scrapping, Miles walks away from Lynch. For the next 45 minutes, he takes pictures of bums, falls in love with waitress Katherine (his real-life wife Kinmont, of Final Impact fame), She cannot fail to fall in love with him, after he says the immortal line: "Keep the change, it's been real." Miles then tends to his kabuki strippers in his club. When Lynch beats up Miles' mom and kidnaps Katherine, Miles is forced to fight one last time. Will Miles be able to defeat Lynch and go back to a life of photographing bums and ride off into the sunset on his Harley with Katherine? 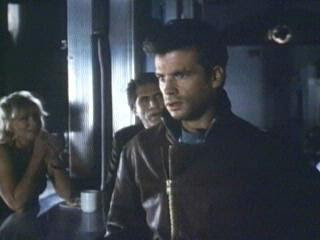 Possibly a first in punchfighting movie history, in Night of the Warrior, men "mud-fight", and bite each other like animals. When this isn't delighting the eye of the viewer, there are Body Rock-like dance sequences. Of course, there is a training sequence featuring Lamas alone meditating with candles.

About Miles' fascination with bum photography, he claims in all earnestness, "I want to be inside them". Note he didn't say "their heads". There is an opera-singing bum meant to be comic relief, especially when he lets loose an operatic "Ahhhhhhhhhhh!" If this silly subplot interests you, might we suggest Bums?

On the subject of comic relief, there is Coco the chef, Katherine's uncle. He has a silly long mustache and he burns all the food. On the subject of photography, Lynch has his own headshot, which he gives to Mom to give to Miles to say Katherine has been kidnapped. Isn't that weird?

Surprisingly, there is a sufficient lack of action here. There are really only two action scenes. Many of which feature Lamas karate-chopping people in the neck. As in Ring of Steel and Cobra, the climax occurs in a "steam factory". Apparently it's a great place to settle your disputes.

If you appreciate the other films in Lamas' oeuvre, you will get a kick out of Night of the Warrior!

Comeuppance review by Ty and Brett
Posted by Ty at 15.6.10

I just saw this, and it was something of a disappointment-- like Film Noir gone bad. Writer Thomas Ian Griffith is no Dashiell Hammett, if you know what I mean. Also, Lamas's mom in this is his mom in real life, Arlene Dahl.

Didn't know that Lamas's mom was in the movie! Also I agree with you. The movie had a lack of action and it was pretty boring at times.

Haha about Griffith. I was surprised when i saw his name as the writer.