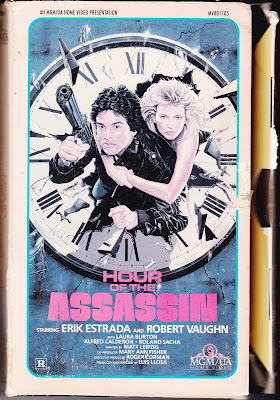 Martin Fierro (Estrada) is hired by some generals to assassinate the new president of the South American country of San Pedro, Roberto Villaverde (Giraldo). They convince him to do this by playing to his sympathies regarding his father, a man assassinated by these very same generals, although Fierro doesn’t know that. According to them, his father was “leftist scum” (which they say behind Fierro’s back, of course). Fierro has his work cut out for him, except for one thing: ex-CIA operative Sam Merrick (Vaughn), who is tracking Fierro and intent on stopping the assassination. It’s a race against time - who will come out victorious?

It’s yet another “El Presidente” movie - A South America-set film about rebels in the streets versus the political establishment. This plotline was more prevalent in video stores than you might think - Cocaine Wars (1985), McBain (1991), Perfect Target (1997) and the latest example, The Expendables (2010). The plot is extremely simple - it’s Vaughn chasing Estrada for over 90 minutes - so after an exciting opening chase sequence and the setup of the plot, the middle section drags heavily. It’s natural that this would happen with such minimal plot. A few interestingly-lit sequences are not enough to solve this problem. 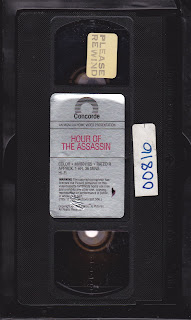 The movie does deliver some standard chases and shooting, but the roles for both Estrada and Vaughn are a little different than usual. The tone is downbeat, serious and low-key. Estrada doesn’t play bad-guy assassin roles too often, and how often do you see “Control 5” himself, Robert Vaughn, at least at the age he was when he shot this movie, running around South America playing the action star?  Of course, Vaughn’s “hair” is odd and is constantly changing from scene to scene, and, like Chris Lemmon in Firehead (1991), whose catchphrase was the ever-present “Jesus Christ!”, here Robert Vaughn utters the word “Bastard!” every other scene.

This was a Corman production, released in the U.S. in the always cool MGM/UA big-box. Director Luis Llosa shot the film in his native Peru and there are some nice locations. He later had some mainstream hits with Anaconda (1997), the Stallone vehicle The Specialist (1994) and the classic Tom Berenger Sniper (1993). He’s also responsible for the Corman David Carradine film Crime Zone (1989). This was his first cinematic foray, and it’s not bad, it’s just standard, and even tends toward boring at times.

This is the perfect example of video store shelf-filler that, yes, has cool box art and all, but will underwhelm you. It makes true gems like Deadly Prey (1987) stand out all the more.

Kind of disappointing that Roger Corman and Erik Estrada did not equal awesomeness. I will say that "bastard" is a really fun word - if I had a catch phrase, that might be it ...

It was a bit of a disappointment. It should have been Erik Estrada or Robert Vaughn mowing down baddies for 90 minutes.

That would be a killer catch phrase.

On the upside, that is a stellar VHS box you got there. I bet you guys have an awesome big box collection, don't you?

I never knew Estrada ever tried to break into the big leagues. Guess it didn't work out. :P
Great review!

Thanks! Yeah we do have a fair amount of big boxes. Which big boxes do you have?

RobotGEEK: Thanks! Estrada has made a lot of hilariously bad movies. Except for Light Blast. That movie rocks!

To be honest, very very few. The coolest is probably "A Virgin Among the Living Dead".

Real Queen Of Horror: It was definitely unfortunate. Robert Vaughn and Erik Estrada is one of the ultimate team-ups.

Dr. Algernon: That is still very cool that you have a big-box copy!

Yeah, I'm a little disappointed to hear this wasn't so hot-- but I still need to hit laser Mission again, so it's no big deal.

It is too bad. Poor Erik. Laser Mission is a fun flick! Do you mean Light Blast? Similar title! Both are cool though.

Definitely going to have to check this out, as in the late 60s, 70s, and 80s, Robert Vaughn always seemed to get saddled with the evil businessman/ruthless tycoon/shady government official/general nasty villain role. It would be nice to see him playing a protagonist, especially as he's the co-lead. The description of this film brings to mind Ray Liotta in "No Escape." Liotta actually got to be the action hero for once in that film. Sounds like Vaughn gets to play that part here. Both Liotta and Vaughn both have a look that easily makes them fit villain parts, so when they get to be a hero, it's a nice change of pace.