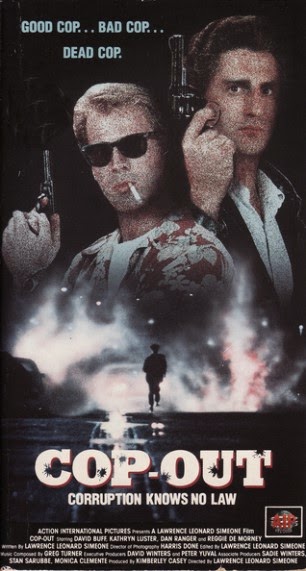 Bobby Vanelli (Buff) is your classic Cop On the Edge (or COTE as we call them). This guy is really angry, and getting angrier, as his brother, a fellow officer, has been framed for murder. Working with his partner, the Hawaiian shirt-loving Turner (Ranger), and a Public Defender, Evelyn (Luster), Vanelli puts his emotional control skills and his indoor voice to the test as he tries to exonerate his brother. There may be some romance with Evelyn and all that, but, naturally, it’s an election year, and there’s a conspiracy that goes, naturally, all the way to the top, so Vanelli dons his sleeveless “fool for love” shirt and gets down to business. Will this cop be out of a job - and will his brother see his efforts as a...COP OUT?

There once was a man named Dave Buff. He’s credited here as David D. Buff, presumably so he won’t be confused with any of the other Dave Buffs out there. He looks like a lost Stallone brother, crossed with Chris Penn and Loren Avedon. Besides Cop-Out, he’s only been in one other thing, a short film of the Stephen King tale “The Boogeyman”, from 1982, which was later interpolated into the Nightshift Collection (1994). So he must have been psyched that he was pulled from playing “Cop #2” in a short film to being top billed and starring in Cop-OUT. Looks like he was promoted. We didn’t know what to expect going into Cop-Out, but based on his name, we thought he might be a musclehead or a meathead, but he’s really more of a hothead. He angrily screams and yells most of his dialogue, as if anything anybody does has gotten on his last nerve. But he gets results, and he just may be the Buff we have always wanted to be.

Unfortunately, Cop-Out - despite the hard work and strong presence of Mr. Buff - is a disappointment. Sure, it suffers from a lot of the typical low-budget pitfalls: stilted dialogue, technical clunkiness, overly-dark lighting, dire pacing issues, etc., but we won’t fault them, necessarily, on any of that stuff. It happens, we get it. Where the movie falls down is that, in addition to already having some of those cards stacked against it, it’s overly talky with many long, drawn-out scenes of boring, dialogue-heavy matters. And at 102 minutes, there’s really no excuse for that. In other words, Buff should have busted more heads, instead of conversing with plenty of talking heads.

That’s not to say there aren’t some very, very dumb shooting/beat-up/car chase/blow-up scenes, and it does feature one of the most brain cell-depleting strip club brawls we’ve seen to date, but the overall junky feel is just too all-consuming to make up for the flaws.

It’s all very amateurish - which, again, on its own isn’t necessarily a bad thing - but it’s just one more notch in the ever-expanding “lose” column. It’s like a childish, adolescent attempt at an adult police drama; note uses of attempted cop lingo such as “bluecoats” and “fun gun” (whatever the heck that is).

Sadly, there are some noteworthy things buried beneath the surface of Cop-Out, but the execution is poor, so they never come out to shine. It doesn’t have the charm of a Provoked (1989) (though it does share a strong central character with that movie) - it’s really closer in spirit to a dud like Lethal Force (2002), and the cinematic style, if there could be said to be one, makes David Heavener look like Martin Scorsese.

It does hark back to a time when someone could rise from obscurity and headline a DTV movie - Jay Roberts Jr., Matt Hannon, and Flint Keller come to mind, just to name a few - and anything went in the wild west of the golden age of the video store. We, as viewers, need not have heard of Dave Buff prior to this in order to take a chance on a VHS rental of Cop-Out.

Having an awesome name would make you stand out from your competitors though. However, the results are quite dumb, and it could have used another B-movie name to support Buff in his efforts. Anyone would do, but we’re thinking like a Robert Vaughn, Troy Donahue, or Charles Napier, anybody on that tier. But we don’t get anybody, and this Cop gets no backup.

Cop-Out, not to be confused with that other Cop Out (2010) (clearly Kevin Smith did not do his homework), is lacking in just too many areas, but the sorest spot is the fact that it was in dire need of editing. That would have solved some of the wonky issues. But there are some problems even Dave can’t save, so when it comes to Cop-Out, we’d say opt out.

FINAL NOTE: Just as the WASP video briefly seen in Ghost Warrior (1985) was a movie highlight then, the video for Anthrax’s “Got the Time” is seen on a TV screen here. If only the movie was as bold, dynamic, energetic and powerful as the song/video, such a contrast between the two wouldn’t be so evident.

I don't always comment, but I love reading your reviews. I love seeing these wild 80's-90's actioners pop up in my feed, and reading your thoughts on them. Many have wound up in my to-watch list based on your recommendation alone. Keep up the good work!

Thanks! We really appreciate the kind words. We got some fun ones coming up. Hint: (Foreign Ninjas)

This one was OK, but the "other" Cop Out was definitely the better film.

This was a tough sit for us. Also thought the Kevin Smith Cop Out was weak too. Way too long for a comedy.

I thought it was just the right length, BTW did you get to see Kingsmen yet?

Didn't get to see Kingsmen in the theater. Will have to rent it on DVD.